JP inspired this report, but so did my recent acquisition of a Russian SKS rifle. While inspecting the action of my new gun, I noted that the firing pin remained in the extended position, as though it had just been struck by the hammer. “That’s not good!” I thought. “That looks like the bolt of an M3 grease gun,” a .45 ACP submachine gun that was in U.S. service for 50 years or so. The M3 firing pin is fixed in the forward position so when the bolt goes forward the pin strikes the next primed cartridge. As long as the trigger is held down, the bolt keeps going forward until the magazine is empty. The only way to stop the gun firing is to release the trigger, which then catches the bolt at the back end of its cycle and prevents it from going forward. 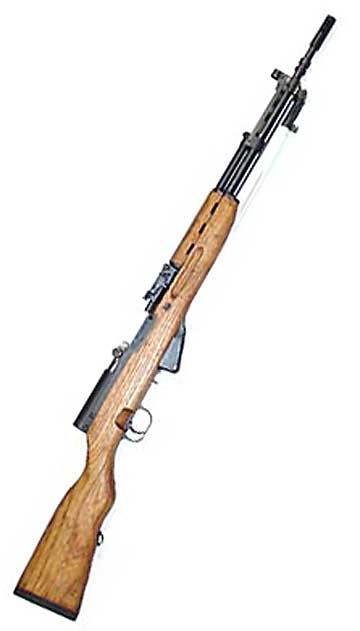 SKS was a Warsaw Pact main battle rifle that was replaced by the AK47.

M3 “Grease Gun” is a .45 ACP submachine gun that fires from an open bolt. This is known as a “slam-fire” gun in slang terms. 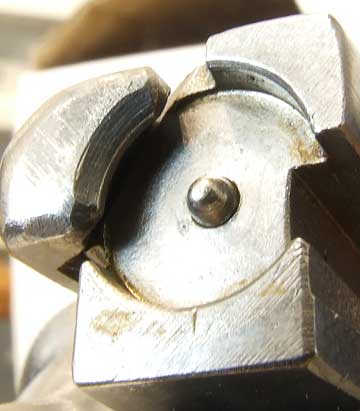 An SKS firing pin is not supposed to stick out of the bolt face like this. It’s should do this only when struck by the hammer. The pin has no return spring and is supposed to rebound from the primer after smacking it. If the rifle were loaded with the pin in this condition, there’s a high probability that the gun would go full-auto the moment the bolt went forward the first time.

The M3 is called a “slam-fire” gun because the entire weight of the moving bolt is what drives the firing pin and causes the gun to fire. There’s no separate hammer, like you’d find on a conventional firearm. Now, how does that relate to the SKS?

Well, the SKS is not a slam-fire gun. It’s got a real hammer that’s supposed to drive the firing pin when the bolt is closed. But if the firing pin sticks in the forward position like what I saw, nothing can stop the gun from firing. And since the trigger does not hold the bolt back, like the trigger on the M3, if an SKS starts firing full-auto, there is nothing to stop it until all 10 rounds are gone.

So this sticky firing pin was a real problem. A little research in the internet proved that, indeed, the slam-fire tendency of the SKS is its greatest flaw. The firing pin has no return spring, and if cosmoline grease or dirt gets into the bolt and jams the firing pin forward, you’re in for the shock of your life.

My time capsule
Several years ago, I gave way too much money for a Feinwerkbau 124. I’ve owned quite a few 124s over the years, so you might wonder what was so special about this one that I gave too much for it. Just this: the gun was encased in a shrine of 1970s parts! It had been mummified by its former owner, who I must assume was also the first owner. The man had built a cabinet-grade wooden case for the rifle and put in everything the gun would ever need…period Beeman Silver Ace pellets, a replacement mainspring, three replacement piston seals (all made from the flawed 1970s formula that deteriorates with time, so they’re all useless now), a sling, oils, greases, instructions and so on, until it became clear to me that this outfit was indeed a sarcophagus.

This FWB 124 was enshrined for all time by its former owner. Among the things he did that didn’t work well was he plugged the barrel with grease.

And the rifle’s barrel was filled with grease. By “filled” I mean that there was a solid plug of grease that ran from breech to muzzle. I know that because I pushed it out with a patched cleaning rod and saw that it was the length of the barrel. Had the grease hardened, the job would have taken much longer. Which brings me to the point of this report.

Grease does not preserve barrels! The fact that governments use a product called cosmoline to preserve metal parts should not convince you to experiment with any old grease laying around the garage. In the first place, cosmoline is a specific type of rust-preventive product. If you aren’t using it, you don’t have the same protection it offers. Second, cosmoline has a shelf life. I just bought some M1 Carbine parts preserved in cosmoline since the end of World War II and they were rusty! Yes, rusty. After a few decades, even cosmoline breaks down and fails to preserve metal.

Here’s the funny part–real cosmoline is not grease! Yep, it’s a product that resembles grease, but it isn’t the same. It’s really more of a wax-based compound than a grease. But that doesn’t stop folks from thinking that it’s grease because when it’s fresh it looks like grease. Those same people think that any old grease can do what cosmoline can.

What grease can do is dry out and get hard. Then, it can crack and allow oxygen to contact the steel of a barrel…rusting it.

What to do? Leave a thin coat of oil on the exposed metal parts. That’s the best protection.

“Yeah,” you say, “but you have to redo that every so often because it doesn’t last.”

Neither does grease! It doesn’t even last as long as oil.

JP: I own a 133-year-old rifle that, to my knowledge, has never had grease in the barrel for preservation. It’s an 1875-version of an 1873 Springfield rifle. And the bore is fine. I keep it lightly oiled–the way the government has always insisted for their rifles.

Keep the grease out!