And now a word from our sponsor Packing and picking pellets

When I was whining about how busy I am on Wednesday, a couple of you got the idea that Pyramyd Air was somehow to blame. Please understand, my friends, that they have never been anything but kind and generous to me. I’m entirely responsible for creating the situation I find myself in, and they would be only too happy to bail me out if I would just tell them how.

And Wayne, on the S200 testing deal, again it was my decision not to get the same rifle in two different calibers. Pyramyd Air bends over backwards to keep me in blogging guns, pellets and equipment. I’m just too much of a cheapskate to run a test like that, because of what it does to their inventory.

Well, today I want to pay them back just a little for all their support. As America’s largest airgun dealer, they also get their share of unfavorable customer comments, and perhaps pellet orders lead the list of topics. There are two big complaints that I will address:

Damaged pellet tins and customers who receive only three tins of pellets when they believe they deserve four.

Damaged pellet tins are the bane of all companies selling pellets in tins. Crosman was so wise to sell their Premier pellet line in cardboard boxes for many years. They’re still packed that way, but no others are. Whenever pellets are packed in metal tins, they’ll show the results of impact suffered during shipment.

And, though it may go without saying, I do want to say that the reason people don’t like dented tins is because it’s obvious the soft lead pellets inside will be damaged at the same time. The tins don’t have to be dented for the pellets to be damaged, but it’s pretty certain they will be damaged when the tins get dents.

Damaged pellet tins – part 1
There are two times when a pellet tin is in jeopardy. The first is when it’s shipped to Pyramyd Air from the manufacturer. Tinned pellets come packed in cardboard sleeves that are usually packed inside cardboard boxes. These boxes are then secured to pallets by shrink wrap and sometimes by banding. If a pallet of pellets falls off the forks of a forklift during handling, or if the forks hit the pallet too high, or if the pallet catches on something in the warehouse as it passes by, there can be impacts that dent tins. The pallets arrive at Pyramyd Air and are inspected. They contain perfect tins, slightly dented tins and heavily dented tins. There are also tins that have been destroyed, with loose pellets scattered everywhere.

One thing about pellets is that they’re generally made of lead. Being heavy, you only want to send them one time. That’s anywhere! So you can forget returning a bad shipment of pellets; it doesn’t happen! Pictures are taken and sent to the manufacturer and invoices are reworked when something bad happens–all of which takes time. Then, there’s the time taken by management and the warehouse staff to sort pellet tins and segregate them in inventory. Next, there’s more time to conduct special sales of dented tins. When all is said and done, nobody makes anything on a dented tin.

Damaged pellet tins – part 2
The other times pellet tins can get damaged is when they’re shipped to the customer. Here, Pyramyd Air has more control. They can pack those pellets better and get more of them to the customer in perfect shape. The question is: Better than what? There are not a lot of solutions to shipping low numbers of pellet tins.

Over the years, Pyramyd Air has simply put the tins in small boxes stuffed with peanuts. That turned out to not to work very well. Then, they tried wrapping them in bubble wrap. That worked better, but was more time-consuming to pack. When you’re trying to package an order as fast as possible, anything that takes extra time stands out like a sore thumb. Cling wrap works even better to keep the tins closed during shipment, but does little about crush and dent protection.

So, they’ve very recently come up with a new way to pack pellets for shipment. That’s what I’d like to show you now. 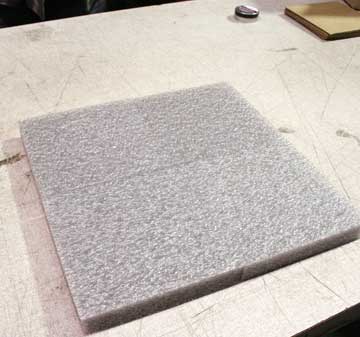 It begins with a sheet of high-density foam. 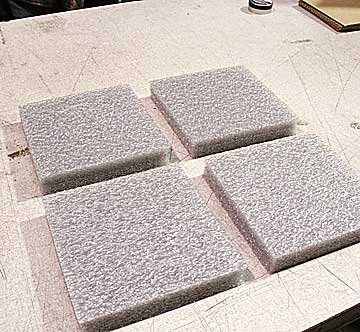 The sheet is cut into quarters. 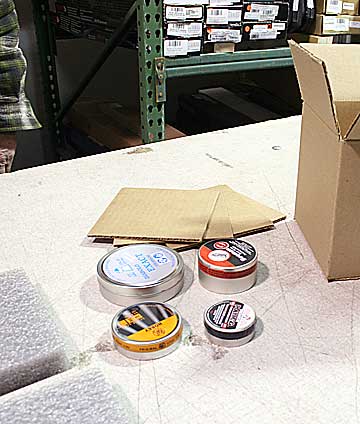 Here is a typical order. Note that the tins are different sizes and heights. They are also different calibers. This is a common order, with the “Get the 4th tin free” promotion. 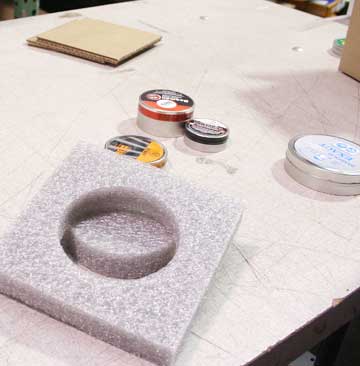 The first foam square is cut to fit the largest-diameter tin. 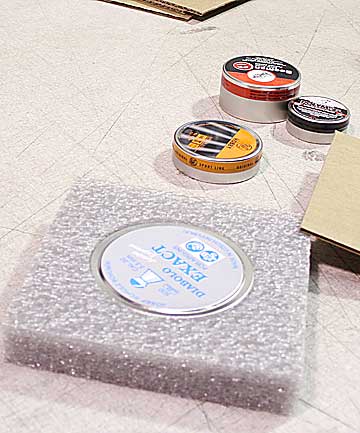 The first tin is placed in the foam square. 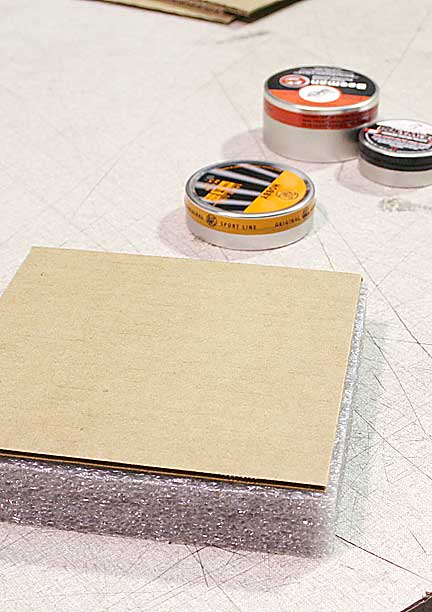 And covered by a cardboard square. These squares have to be cut and warehoused, too. 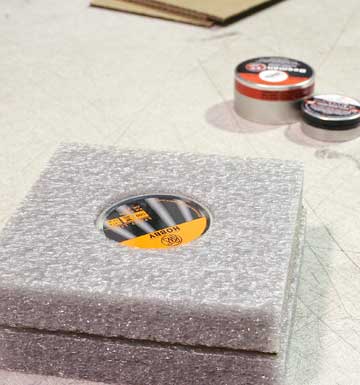 Then the next tin is packed on top and so on. 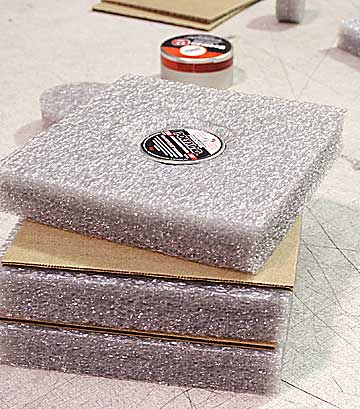 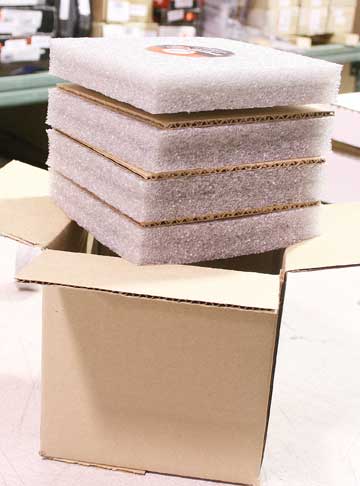 The stack goes into a box. 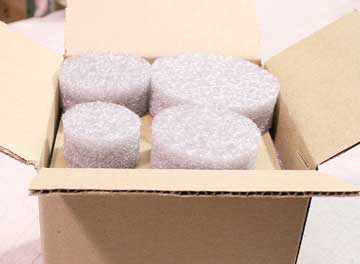 The cutouts go in the box to pad the stack. Nothing is wasted. 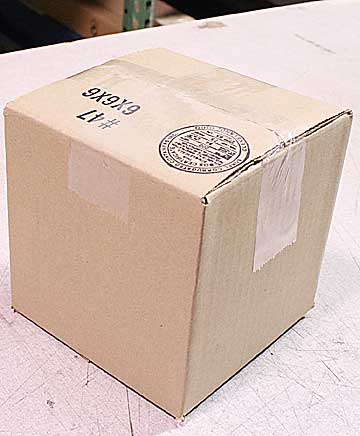 The box is sealed.

Kudos to Pyramyd Air
The forums are buzzing about this new pellet-packing method. Long-time customers are saying this is the way they want their pellets packed from now on. But there’s more.

Get the 4th tin free!
Some customers are grumbling about not getting the 4th tin of pellets for free, the way the promotion states.

Well, actually this used to be a bigger problem than it is now. In the past, if the 4th tin wasn’t picked by the customer, it wasn’t shipped. Some customers didn’t understand how the software worked and assumed it was going to select the 4th tin for them, so they didn’t pick a 4th tin.

That was in the past

Pyramyd Air now has a prompt in the ordering program that reminds the customer to select the 4th tin. That has fixed the problem.

However, there will always be a few scattered cases where the customer really does order 4 tins and gets only 3. That is a packing mistake, and has to be corrected by calling Pyramyd Air when the shipment arrives.

I tell you this because of the old software problem and some people who haven’t ordered pellets from Pyramyd Air in several months are not aware that it’s been fixed.

The 4th (free) tin cannot cost more than the lowest-priced tin of the other three tins.

Wow, a long one today, and I’m sorry that I didn’t give you grist for the weekend gabfest. Well, you guys will just have to get that one going yourselves. See you Monday!