Before we start, I have a favor to ask. Some of you have indicated you wouldn’t mind helping me answer the blog comments. If you want to do that, click on this email link. Please provide your name and/or screen name in the body of the message. The subject of the email will fill in by itself. Don’t change it as it will help me quickly recognize those who want to help out.

The sight I’m showing you today was a gift from Kevin. He said he wanted me to see what a neat addition it made to the Diana 27, but told me it was actually from a Diana 75. Of course, the sidelever model 75 is just the latest version of the Giss anti-recoil system that began with the breakbarrel Diana model 60 and progressed through the models 65 and 66. 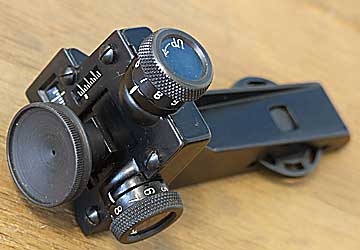 When he described the sight, I thought it was one of the old sporting rear sights that Diana had adapted to an aperture by putting a peep hole where the rear notch would be. When the sight arrived, I saw that it was actually much nicer than that. This is a purpose-built sight with the same adjustability as the top 10-meter sights. I assume Diana no longer makes it. If that’s true, it’s a shame.

This sight answers a question that bothers many airgunners: What’s the purpose of the cross-grooves on top of the Diana rear sight base? That’s the base we all assume is for a scope.

Many Diana 27 rifles, including this Hy-Score 807, have a rear rail like this for mounting a peep sight.

On the bottom of this sight, we see the answer. A foot that’s grooved with a matching pattern that adjusts down to interlock with the grooves on the rail, thus creating a positive mechanical lock for the sight. Though many of the Diana spring guns don’t recoil much, others do. Diana knew that clamping pressure alone wasn’t enough to hold the sight still. 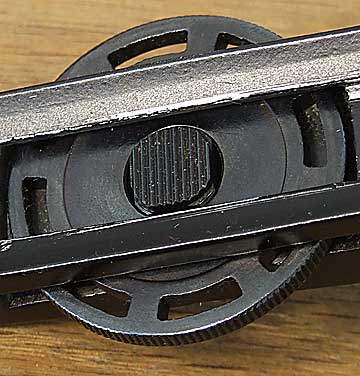 The ridges on this part interlock with the top of the rear sight rail.

I had to use my .22 caliber Hy-Score 807, which is a Diana 27 under another name, because the .177 Diana brand model 27 I got at the Roanoke show didn’t have the sight base on the receiver. Kevin wanted me to also swap the fixed front sight of the 27 with one that has a removable insert. I have several of them; but when I went to fit one to the rifle, I discovered the dovetail on this sight is very narrow. None of my other front sights fit. Still, the 27 front sight is a crisp post, so it works well. 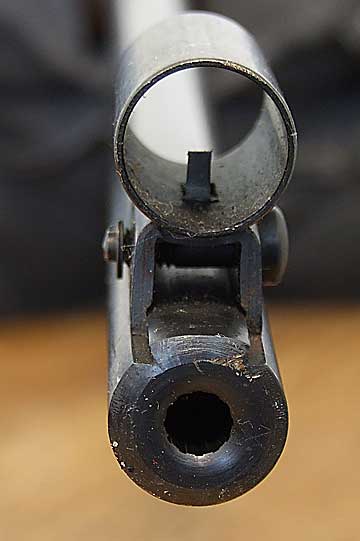 The 27 front sight is fixed, but it does work well with a peep.

Before testing the peep I shot the rifle with the standard open rear sight it came with. It’s not too shabby! It features micrometer click adjustments in both directions and a crisp rear notch. 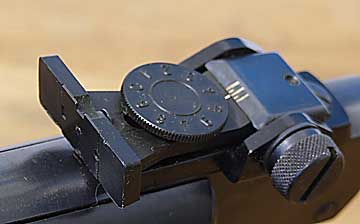 The 27’s rear sight is a very nice adjustable unit.

Going all the way back to 1979, the pellets of choice for this rifle have been RWS Superpoints. That’s when I bought my first .22 caliber model 27. There may be a better pellet, but I sure don’t know what it is. We’re looking at velocities in the 475-490 f.p.s. region, which suits me fine with this rifle. And I have the trigger adjusted to a crisp two-stage pull that’ entirely predictable, so control isn’t an issue.

The 27 is one of my old “go-to” airguns, so it was pretty close to right on at 10 meters. Only a couple clicks of windage brought the group to the center of the bull. And the 27 sight adjusts with crisp clicks, so you know what you’re doing. 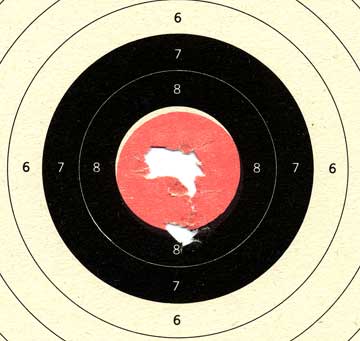 This is a representative target OF FIVE SHOTS at 10 meters with this .22 caliber Diana 27. This was shot with the original open sights.

Changing the sights was a one-minute job once I figured how to get the rear sight off. The peep sight simply slides on the dovetail and clamps wherever you need it for eye relief. Once on the gun, it’s rock-solid. Of course, the location moves from the rear of the barrel (where the original rear sight was) to way back of the action, where a peep belongs. 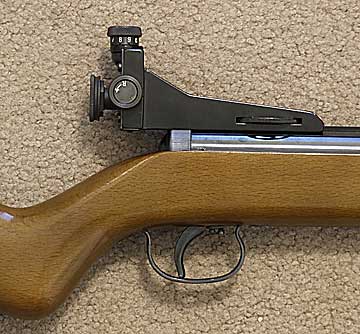 Diana peep attaches all the way at the rear of the rifle’s action.

Like the original sight, the peep needed only a couple clicks to bring it to the center of the target at 10 meters.

Back to the task at hand, the sighting wasn’t much easier, but the sights were defined better. And the results of that showed up in the groups I shot. While they’re not astounding, they do represent a reduction of about one-third in size. 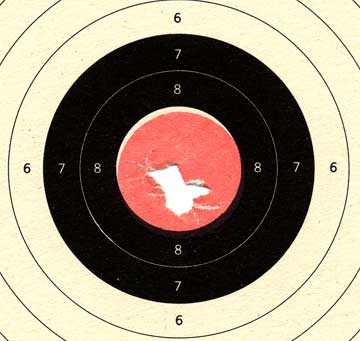 With the peep sight, the group shrank by about a third.

So what do I think? For starters, this peep really works well with this rifle. The 27 is such a smooth shooter to begin with, and the Diana peep just makes the experience that much better. With a sight as precise as this, a nice old air rifle like the 27 can go to a new level of accuracy. Consider that any good peep sight will usually improve things about this much over sporting sights, and this sight was specifically made for rifles in the Diana line.

Thanks to Kevin for his generosity that made this test possible.