I promised this report to Chuck late last year, and now we have another annonymous reader who wants a military “BB gun” with more power than the Crosman M1 Carbine. Well, neither one of these rifles is really a BB gun, but the round lead balls they shoot look enough like BBs that many people think of them that way. These two air rifles are perhaps the finest military trainers of all time!

Please forgive the black and white photos. I took them from the files of The Airgun Letter, because the color slides are too time-consuming to locate. But the color images I show convey the warm look of the VZ35. 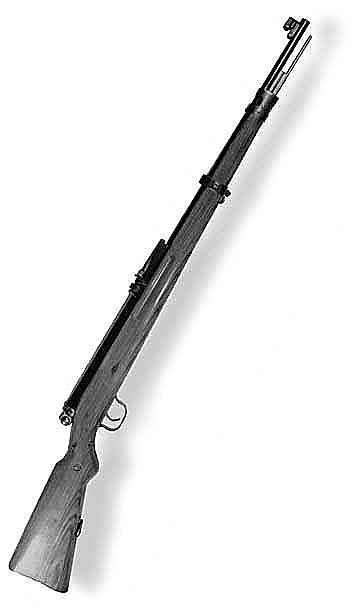 VZ35 is a handsome full-sized military trainer. This one is missing the upper handguard. 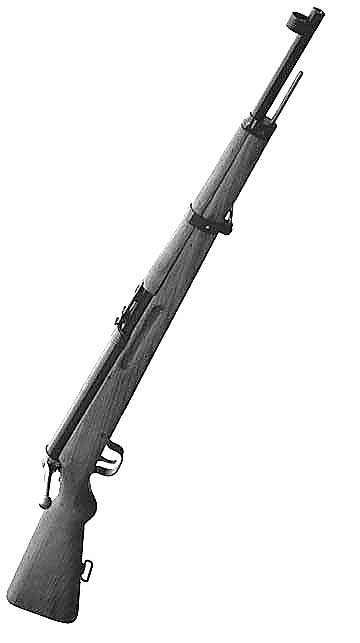 VZ47 looks nice by itself, but suffers next to the older 35.

History
After World War I, the allies imposed restrictions on the defeated nations regarding the firearms they were allowed to make and use. They also imposed limits to the types of forces they could raise and maintain. At first there was strict adherence to the rules, but over time the guard was relaxed and creative things were done to circumvent the restrictions. The military training airgun was a direct result of this, though there had been a BSA artillery trainer several decades earlier. But the two Czechoslovakian airguns we will see today are intended as airgun analogs for military service rifles. They look the same, and the earliest one–the VZ35, could accept the same bayonet that was standard on the CZ 24 Mauser rifle of the era. I owned an example of both rifles for several years, which gave me the opportunity to test and shoot them at my leisure.

VZ35 has a bayonet lug that accepts the same bayonet as the CZ24 rifle. Note the robust end cap!

In contrast, you can see how the 47 was made to be cheaper to produce. No bayonet lug and look at the stamped-metal end cap.

VZ35
The VZ35 was made by the Czech State Arsenal in Brno before World War II. The label VZ35 means model 35, or something to that effect. It was a stand-in for the Czech service rifle, the Mauser CZ 24 that some experts consider one of the finest model 98 Mausers ever made. Certainly, no one can fault the Czech arms-making ability then or now.

The air rifle is full-sized, weighing over 9.5 lbs. and measuring 43.5″ overall. It’s the same size as the Mauser it copies. The stock on mine appeared to be made of blond ash or oak, but many of them seem to be made of dark beech. All the metal is highly polished and deeply blued except for a few parts, like the rear sight leaf, which are left in the white. The stock has two sets of sling swivels, allowing the soldier to sling it underneath or along the left side. 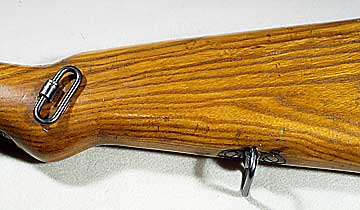 The VZ35 butt has two sets of sling swivels

VZ35 forearm has a matching set of swivels. You can see the place at the top of the band where the upper handguard goes.

Bolt-action
The bolt-action is unique. At rest, the bolt sticks straight out to the right side. When you want to cock the rifle, swivel the handle straight up, where it aligns with another length of lever concealed inside the stock and action. Aligned like that, they make one longer lever that is pulled back and down to pull the powerful mainspring and piston into lockup with the sear. It takes a powerful pull to cock this rifle. 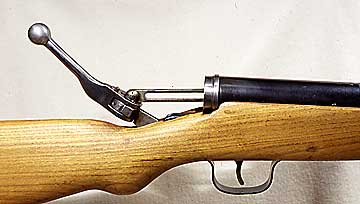 Lift the bolt handle up like this, then rock it straight back to cock the rifle.

Gravity-feed magazine
Both rifles have a gravity-feed magazine that I used when helping Daisy fight their lawsuit from the Consumer Products Safety Commission, which tried to claim that Daisy’s gravity-feed BB magazine was flawed. With these two examples and a Gatling gun, I showed them the weakness of that argument, which proved to be the last argument in their case. They reached an out-of-court settlement shortly after their lawyer was shown how reliably such mechanisms work. Since you have to hold the rifle in a certain position to work the bolt when cocking, the BB was always ready to drop into the loading trough once it opened. On the 35, the magazine is a fancy steel funnel located atop the receiver. You pour 4.4mm lead balls into the space until it’s filled, then snap the spring-loaded cap in place to secure them. After that, the rifle can be fired as fast as the shooter can work the bolt. 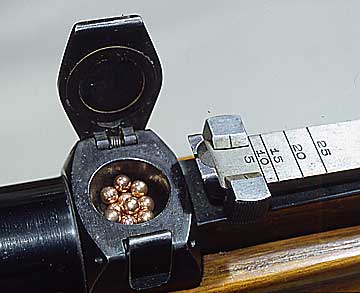 VZ35 magazine is gravity-fed through this hopper. Those are 4.4mm copperplated lead balls. 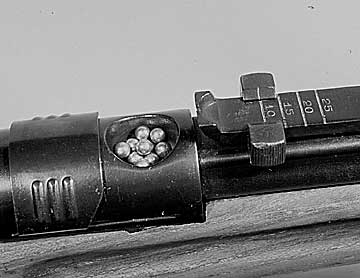 On the 47, the makers simplified the flip-up magazine cover to a sliding sheet metal cover.

The firing mechanism is a classic BB gun type–part catapult and part spring-piston. The catapult gets the ball moving, then a sharp blast of air accelerates it to its 425 f.p.s. top speed.

A rifled barrel imparts a spin to the ball that delivers half-inch groups at 5 yards and decent groups at 10 meters. The rear sight is graduated out to 25 meters, but I found accuracy dropped off pretty sharply after 10. Since everything works on both models, they can be used to teach safe gun-handling techniques with far less danger, not to mention cost. When the soldiers were ready to graduate to their 8mm Mausers, the 5-lb. trigger-pulls must have seemed light compared to the 11-12 lb. pulls on the air rifles.

Airgun writer and collector Larry Hannusch wrote about seeing a sporter variation of the VZ35. It lacked the upper handguard and the military end cap/bayonet mount. He thought that was a special model, since the ones he’d seen were missing the national crest, but my own 35 was also missing the crest and the upper handguard. And mine had all the military mountings on the stock. I think there was some kind of soldier send-back program that caused the rifle to be disassembled and that’s where the handguards went. As for the missing crest, I can offer no explanation.

I had occasion to completely strip and overhaul the VZ35, which is how I learned about the BB gun nature of the internal parts. The mechanism is very complex, and I don’t recommend anyone following in my footsteps. No velocity improvement seemed possible at that time.

VZ47
After WW II, the Czechs produced a simplified second model they called the VZ47. In function, it copies the VZ35 closely, but many corners were cut to lower production costs. The 47 does not accept a bayonet, and all the hardware is made from stamped metal instead of forgings. Everything is thinner and lighter, resulting in a rifle that weighs about 8.5 lbs.

The finish is also noticeably of a lower standard on this rifle. The bluing is matte and not as deep as on the older airgun. The wood finish seems lacking and nondescript. However, if a VZ47 was all you saw, you’d be impressed. Only by association with the 35 does it suffer.

An importer brought in several hundred VZ47 rifles in the 1990s, and I helped them spread the word. The first batch retailed for $225 and the last batch for $260. The rifle was just as accurate as the older airgun, and many of them had unit markings on the stock.

Production air rifles will never again be made to this quality level, which is why I go to the airgun shows as often as I do. You wanted to see some bolt-action air rifles? Well, here are two of the best.