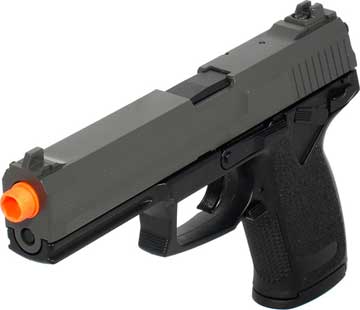 UTG Navy SEAL Mk23 pistol may be one of the best buys in a low-cost spring-piston gun.

For this review, I decided to do some research before I actually tested the gun. By reading the reviews on the Pyramyd Air website, I learned a lot. The first thing I learned concerns the recommended ammo. Pyramyd gives the expected velocity of the gun with both 0.12-gram BBs and 0.20-gram BBs. The 0.12-gram BBs are leaving the muzzle at 310-320 f.p.s. Well, I’m not an airsoft expert, but the little experience I do have tells me right away that’s too fast. Lightweight BBs don’t fly true when they go that fast. They’re much better down around 250 f.p.s. and slower.

The 0.20-gram BBs are supposed to go 220-240 f.p.s. from this gun. That’s a much better speed range, plus the 0.20-gram BB can take higher velocities better than lighter BBs. So, I would think this gun is too powerful for 0.12-gram BBs. And that’s what many of the reviews say–that the 0.12-gram BBs are curving too much in flight.

When you see something like that–STOP USING THOSE LIGHTWEIGHT BBS! Don’t wait to be told what to do. It’s obvious they don’t work well, and the reviews confirm it.

Next, the reviews pointed out that the silencer that comes with the gun doesn’t really silence it. Pardon me, but…DUH! Do people also think that erecting a chromed vertical exhaust pipe behind the cab on a half-ton pickup truck turns it into a long-haul tractor?

Here is the deal. YOU CAN’T SILENCE A SPRING GUN MECHANISM WITH A SILENCER ON THE MUZZLE. That’s like believing in the Hush-a-Bomb from Rocky and Bullwinkle. It didn’t REALLY exist!

Sorry, guys, but those comments enrage the Captain Obvious in me. There may not be any stupid questions, but there certainly are more than a few casual remarks that are not well thought out. However, in reading the reviews further, I do get a sense that the UTG Navy Seal MK 23 pistol is quite accurate, and more powerful than the price tag would indicate. That interests me, because I need a good accurate airsoft pistol on hand to test various BBs that come my way. It would be nice to have something like that on the shelf, just as I have certain pellet rifles and pistols that I can turn to when I need performance I can count on.

With that behind us, let’s dive in. The UTG Navy Seal MK 23 airsoft pistol copies the H&K Mk 23 Mod. O .45 ACP SOCOM offensive handgun that was adopted in 1996. It’s supposed to deliver match-grade accuracy, while standing up to rugged SEAL use.

This airsoft pistol is a repeating spring-piston pistol–and right there I must explain what I mean, because many of those who are interested in this gun are young shooters who lack a firearms background. A repeater is a gun that contains more than a single round, so it can be fired more than one time without reloading. BUT–and this is very important–it does not mean that the gun must fire every time you pull the trigger! There are other things that must be done first, or the gun will not fire. In the case of a spring-piston airgun, the piston has to be cocked manually every time you want to fire the gun. That is accomplished by pulling the operating slide ALL the way to the rear until a click is heard and the hammer is cocked, and then returning the slide to the forward position. The gun can then be fired one time.

To shoot again, the slide must be pulled back again. You cannot just cock the hammer and then shoot the gun. While the hammer will cock, the piston will not, and the gun will not fire. You can even cycle the hammer double-action by just squeezing the trigger like a revolver. The hammer will come back and then fall as if to fire the gun, but nothing else will happen.

This is called a repeater because once the magazine is loaded with as many as 26 BBs, it can be cocked and fired repeatedly without needing to load more BBs. Only one BB comes out every time you fire the gun.

Some of the reviews say this gun is larger than a Desert Eagle pistol, but it isn’t. A REAL Desert Eagle firearm is larger than a REAL H&K Mk 23 firearm, and therefore accurate airsoft copies will hold the same dimensions. This is a large handgun, though. It’s significantly larger than a Colt M1911A1 pistol, for instance. The grip is both long and wide, so the pistol will feel better to shooters with larger hands.

For an inexpensive airsoft spring-piston gun, this model is also on the heavy side. Only the trigger and slide release lever are metal, but the engineering plastic the gun is made from is dense, and the gun feels pretty hefty.

It comes with two magazines and a FAKE silencer. It’s a fake because it doesn’t silence the gun in any way, but it looks real. Also, this gun makes so little noise when it fires that it’s already quieter than a real silenced firearm, so what does everybody expect? When the silencer is threaded on the orange tip of the muzzle, it covers the orange color almost completely, but the silencer has an orange muzzle of its own.

The tactical sights are a white-outlined rear notch and a white ball on the front post. You’ll center the ball in the rear notch, and put the ball on your target.

There’s a wide accessory rail under the forward part of the frame, but it has no cross slots. Some airsoft accessories may fit, but those with real Weaver mounts will not, because there is no cross slot to hold the Weaver key.

The controls that work are the magazine release and the safety, which masquerades as the slide stop. All other controls are non-functional and merely cast into the plastic frame.

I have to comment that I chose to test this particular airsoft pistol because of the many great reviews customers have given it. Finding a nice airsoft gun in this price range isn’t easy, and from what I see, this might be one of the best. 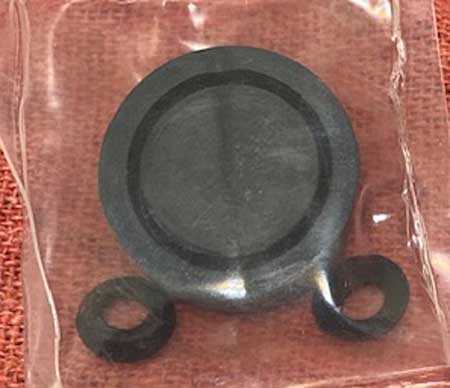 The importance of seals in airguns