Today, I’ll look at the Alfa Competition pistol from Air Arms for a second time. You may remember me telling you that this would be a longer report because there are complexities with target guns that you don’t normally encounter with a sporting gun. The biggest of these is finding the right pellet for the gun. That can take a very long time, so I’ll tell you how I do it, but I’m not going to actually find the very best pellet for this particular pistol, because I haven’t got enough time. That will be in another report, though.

Let’s look at the power curve. I want to know if this pistol has enough air for a men’s match, which is 60 shots, plus sighters. I’d normally skip this step because all the 10-meter PCPs pistols I’ve tested are regulated and have a more or less standard-sized air reservoir under the barrel. This one does not. It stores the air inside a small tank in the grip, so I added this important step just so we’d all know if the gun was useful for match shooting.

Filling the gun
Since this is an air pistol, I’ll fill it with a hand pump. It takes so little air that i think a scuba tank is unnecessary. The number of pump strokes that are harder (i.e., those above 2,500 psi for me) is so small that it’s easy enough to just grin and bear it.

The instructions say to fill to 200 bar. Since 3,000 psi is only 6 bar more, I filled to that pressure the first time, just to get a good look at both ends of the power curve. As it turned out, that was unnecessary, because this gun does not like to be filled even to 200 bar. I’ll look at the velocity data and pick a better stopping point for the second fill. I’ll talk you through the logic of how this is done, including some shortcuts.

You may remember that I dislike the Air Arms fill adapter. It works fine, but the gun always ends up in a strange position because of how the adapter fits, so it’s not my preference. It does screw onto a standard 1/8″ BSPP thread, though, and that’s a known standard for PCP gun charging equipment. 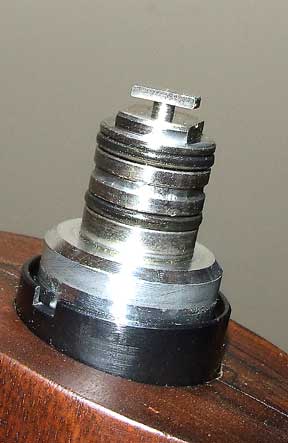 This is the fill coupling on the butt of the pistol. The two o-rings needed silicone grease before the adapter would slide on. 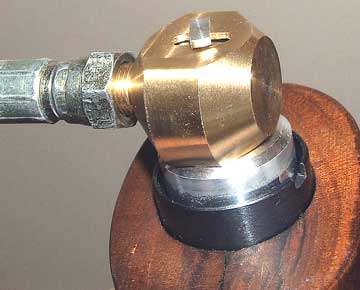 The Air Arms fill adapter slips over the two o-rings and locks up with the gun through a key on the fill coupling.

Checking the power curve
Those who are thinking about getting into precharged airguns, this procedure is an important one. It requires a chronograph, which I feel is an essential part of PCP equipment. What you do is chronograph all the shots, using the same type of pellet.

A regulated gun will start at a certain velocity and remain close to that velocity until the pressure in the reservoir has dropped below the minimum pressure the reg can handle. After that, the velocity declines.

An unregulated gun will usually start slow and then climb if the gun is slightly overfilled. That’s a good thing, because after you have the velocities recorded for all the shots you will test, a velocity curve will be revealed in the numbers.

Shot No. 34 went faster than 440 f.p.s., so the curve was still on the upward slope. Can you see clearly that this pistol exhibits the classic signs of being unregulated? And can you also see why this test was necessary? Until I know the performance curve, I cannot know how many good shots there are, nor can I know what the starting fill pressure really should be. This is why a chronograph can be so important when testing a new PCP. They don’t all perform like it says in the book!

Shot No. 43 inched above 450 f.p.s  for the first time, but the velocity was still climbing. It didn’t get back that high again until shot No. 50, but after that it didn’t want to come back down, either.

Shot No. 58 topped 460 f.p.s. for the first time. And shot No. 74 went 474 f.p.s. At this point, I knew the pistol was not going to exhibit an inverted “bathtub curve” with an upward slope followed by a relatively large flat spot at which all the velocities are very consistent and then a similar downward slope. From my experience, this gun looked like it was going to keep rising and then flatten at the end for a short string, followed by a precipitous drop when it came off the curve.

So, what does this tell us? First, that this pistol is unregulated. Second, that no matter where we select the best fill level, we will have to be content with a broad velocity swing over the number of shots we’ve chosen. Target pellets are heavier than Basics, so the swing won’t be as large as 40 f.p.s., but it’ll be close.

At 10 meters, a 40 f.p.s. total velocity variance won’t affect accuracy that much. While I would prefer less of a swing, I can live with it. So, let me look at the performance curve and try to select the best place for competition.

Since I cannot avoid going 480 f.p.s. (the fastest shot went 481 f.p.s., and there were only three like that), I selected the final shot of 460 f.p.s. (shot No. 112) as my end point. If I want 60 shots with five extras for insurance/sighters, that makes my first shot on this string go back to the first shot at 455 f.p.s. There were three shots before that were 450 f.p.s. or faster, so I credit this pistol with a total of 68 good shots. I’ll predict the starting fill in a moment, but I’m not done with the analysis, yet.

Although my first shot is 450 f.p.s., the velocity does dip below that mark in this string. The slowest it goes is 443 f.p.s. The fastest is 481 f.p.s., so the maximum velocity variation in a string of 68 shots is 38 f.p.s. As I mentioned, a heavier pellet will tighten that variation a bit, so expect maybe 32-34 f.p.s. across a 68-shot string. That’s more than I like, but for 10 meters it isn’t going to make much of a difference. So, the question of whether or not the Alfa pistol holds enough air to complete a men’s match has been answered. It does. If you have to shoot the extra 10 shots afterward, you’ll have to refill the pistol.

Determining the starting fill pressure
The way to determine the starting fill pressure for a PCP is to keep decreasing the fill pressure by 100 psi, until the first shot out the muzzle is within the desired power curve. But I have a faster way to get there. Experience tells me that a partially valve-locked valve uses far less air than that same valve uses when it’s shooting within the power curve. Looking at the total shot string I fired, it took me 48 shots to climb to where I wanted to start shooting. That’s very close to half the total shots fired, but from an air usage standpoint, it’s more like one-quarter to one-third the total air used.

I know the start point was 3,000, so I need to connect to the gun and determine the point at which it starts to accept a fill. In other words, the end point. Since I shot four shots after falling off the power curve, I’ll add 100 psi for them and call that number the low end of the fill.

My method takes far fewer times than the 100-psi-per-time method. As an airgun tester, I have to use it to cut down on my test times.

I know that there are those among you who want to know absolutely everything that happened in my tests. Herb, for example, will create several algorithms to construct an alternate universe from my data and then attempt to occupy that universe, even as Rocket Jane Hansen seeks to destroy the universe he presently inhabits 😉 You guys and gals are lucky I love you!

So for those who want to know, here are the data, in even columns as they were gathered. They run top to bottom, left column to right column. 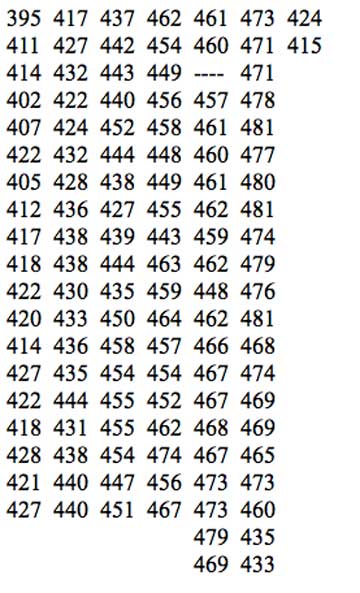 I’m sorry those two columns are longer, but when dealing with 116 numbers in sequence and discovering that I screwed up the presentation around number 70, I just punted. The numbers are sequenced exactly as they were recorded and the one that is missing was a shot I lost. It actually went into the wall of my office, where it took my wife about 90 minutes to discover. She wants me to write yet another expose on how stupidents happen (stupidents are “accidents” that should never happen).

So, here’s what I know. This pistol is going to want to shoot slightly heavier target pellets at around 435-460 f.p.s. I don’t want to shoot any slower than that, so the total shot string is going to be about the same as it is now. Therefore, I will not adjust the gun’s power.

That’s it for this time. Next time, I’ll look at some pellets. 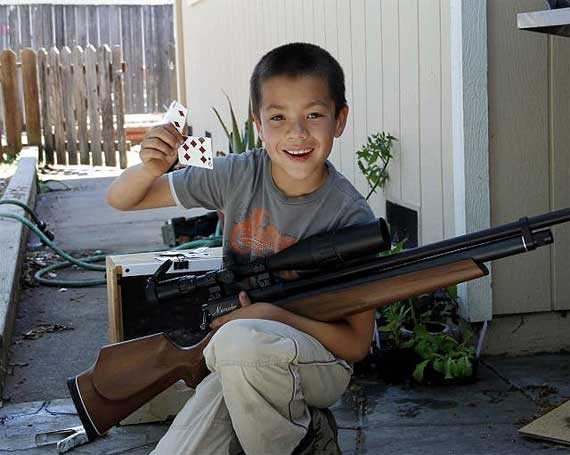 What are airsoft guns used for? – Part 1 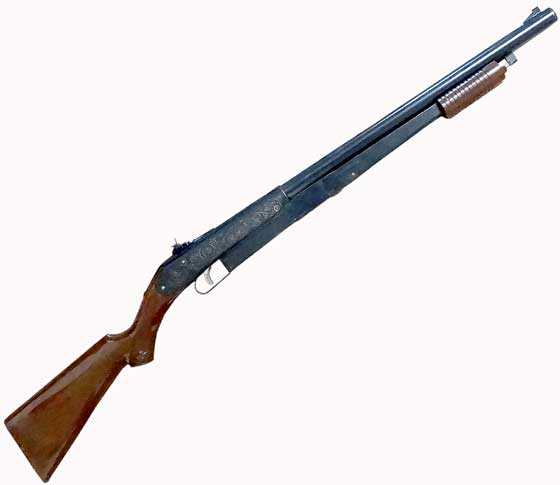