Well, good old Vince is standing on the turnbuckle, ready to pounce on me today with ABSOLUTE PROOF that B.B. Pelletier exaggerates! The nerve of that cheeky fellow!

Even so, I will permit his feeble attempt to embarrass me in front of all you readers, as we learn whether the old Crosman flying ashcans were really better or worse than cheap Chinese pellets.

Go on, Vince. Give it your best shot!

Hey! You! Get offa my cloud!

by Vince
“Believe me, you wouldn’t want to go back to those times! The cheapest Chinese pellets are better than what we used to get from Crosman.”

Those immortal words, which cut me to the quick, were spoken by our very own B.B. back in Feb. 2008, and he was referring to the old “Super Pells” that Crosman used to make pretty much until the current Crosman pellets started production. I dunno what makes this guy think he can come along and just squish some of my fondest childhood memories just because he knows what he’s talking about…but a-squishing he did go!

You see, one of the fondest joys of my preteen and early teen years was shooting the Slavia 619 my Dad gave me, one that I think he bought in the ’50s shortly before I was born. Before he gave it to me, he made sure I understood that THIS WAS NOT A TOY, and it was light-years above the Daisy-Sears 1894 he had gotten me a few years prior. It had a RIFLED SOLID STEEL BARREL, just like the guns in the WWII fighter planes I read so much about, and it could actually KILL THINGS. He once did in a garter snake with it.

I shot the dickens out of that Slavia. I savored every trigger-pull as if I were unleashing some SERIOUS POWER on an unsuspecting tree, target or old model airplane. And it was ACCURATE! My Daisy 1894 couldn’t hold a candle to it (my 179 pistol was a joke), and I prided myself on being able to whack the old metal Crosman pellet tins very consistently at about 30-35 feet. Doesn’t sound like much now, but back then it would handily out-shoot any BB gun owned by anyone else I knew.

And it did all this usually while shooting Crosman “Super Pells.” In fact, I remember when they phased out the metal containers and switched to plastic. As they got empty, I’d shoot at those little red lids (about 1-1/8″ square). I usually did so with success. More often than not, I’d nail ’em, but they were certainly more difficult to hit than my usual victims. I seem to remember thinking back then that those were about the smallest targets I could reliably hit at that range.

So, 35 years later B.B. comes along and tells me that these pellets with which I dazzled my friends and myself were ever so horrible, so I’m thinking that I must be mis-remembering and overestimating my standards of youthful marksmanship. Because the “cheapest Chinese pellets,” as most of us know, are the Industry brand globs that set a standard of inconsistency second to none. When I’d gotten back into airguns a mere 5 years ago, I made the mistake of assuming that pellets were all pretty much the same. After all, the Slavia of my youth didn’t seem to care if I was using Daisy or Crosman. Predictably, then, I wasted a lot of money buying those Industry pellets before I discovered exactly how bad they really were (yes, sometimes I’m a little slow on the uptake!). If the old Super Pells were even worse than these, as B.B. says, I NEVER would have been able to shoot as well as I seem to remember.

A year or so ago, I bought a QB57 that included the NEW Industry brand pellets (in the red tin) which I coincidentally was itching to try out. You see, I knew that Shanghai was trying to clean up its act with its new series of airguns–the AR1000, QB15, QB18, and so on–and I figured that they MUST have done something about those horrible pellets. Well, they did something, all right. These are obviously from a different mold. When I finally got to try them, they seem to shoot just as badly. Maybe even worse.

Back to my snit. How could B.B. possibly say that the old Crosman flying ashcans were as bad as these Industry brand lumps? Is it possible that my memories are that horribly distorted? Or is B.B. wildly exaggerating and just playing games with my head? So, when my Dad recently gave me his old Crosman 1008 CO2 pistol with a couple of containers of Super Pells stuffed in the box,it dawned on me that I could find out for myself.

I decided to shoot these against the much-loathed Industry pellets just to prove a point. And I would shoot them against other inexpensive wadcutter pellets just to see how they fare against modern stuff that ISN’T crap-in-a-can. 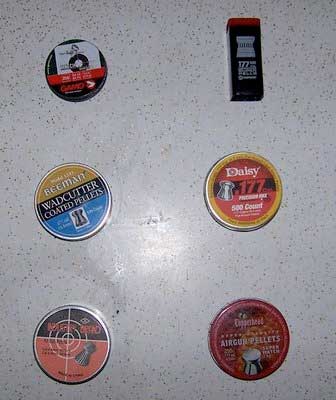 Starting at upper right, the tried and trusty Gamo Match had to be included in this test. After all, it’s cheap–as low as $1.86 per tin of 250. Accounting for inflation, that’s certainly cheaper than the 99-cent Super Pells of the early 1970s.

Next to the Gamos are the late, lamented Super Pells that were so callously slandered on these very pages, in the later plastic container. They look ready for a fight, don’t they?

Middle left and middle right are two Chinese wadcutters that would prefer to pretend that they aren’t related by nationality to the Industry Brand stuff. Both the Beeman on the left and the Daisys think of themselves as respectable pellets, even though either can be found for about $3 per tin of 500. Of course, ANYTHING with the Beeman name is going to be good, right? And as for Daisy, they call theirs “Precision Max.” The “Max” stands for either “Maximum” or “Maxwell” (or “Maxine”?), and this test is gonna find out which!

Lower left is the Industry brand tin. As we’ll see shortly, the container is made with infinitely more precision than the actual pellet.

Lower right is the tried-and-trusty Crosman Copperhead wadcutter. A lot of guys still like them. If you can still find them in the clear plastic boxes, you’ll usually see that the price is often under $4 per 500.

You can doll up anything and make it look good, so let’s strip away the fancy packaging and see what the pellets inside actually look like:

Ok, Ok. I’ll admit it–the Super Pell doesn’t look too good. In fact, it looks downright funky with that dished–yes, dished!–nose. Maybe it’s a parabolic reflector that gathers up stray gamma rays and concentrates them onto the target to increase the destructive energy unleashed upon impact? I dunno. But it’s my story, and I’m sticking to it.

For pure wonderment (or bewilderment), the Industry pellet rapidly draws the eye away from the roughly hewn Super Pell. To my eye, it sorta looks like it’s in motion even while standing still. Maybe a little like a hula dancer in mid-hip-wiggle, or something like that.

Already I’m getting encouraged. But which guns to test with?

The weapons:
Since the Super Pells were designed back in the days before the magnum wars, it seemed only fair to avoid using the heavy-hitters in my gun closet. I’d want to use guns that were of the general velocity range that Crosman might have anticipated for these pellets. 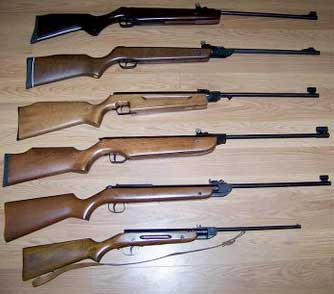 Starting from the top there’s my Hammerli 490, which after a going-through and a SERIOUS amount of coaxing in the pivot area has turned into a nice shooter. It’s sort of a descendent of the old Shanghai-built Industry B2 except that it looks much better, shoots much better and is probably more reliable because it has a bit less power. It does mid-500s with normal weight pellets.

Next is a Gamo Sporter 500. The same basic gun has been around for quite a while and was also sold under the Daisy name a few years ago. It’s typical Gamo in that it has a mediocre trigger, a lot of spring twang and is quite accurate with the right pellet. This gun tends to shoot around 700 fps. A while ago, an online dealer was closing these things out for $60 and I got two of them.

At mid-700s the Slavia 634 is a bit more potent than the Gamo, and is a better-made gun in every respect. It’s one of the few guns I’ve got which has never been apart (except for the trigger) because it just didn’t need any improvement.

The RWS 93 is the most powerful gun of the test, generally doing about 800 fps. It’s full-sized and heavy for the power (heavier than a model 94), but is a very pleasant gun to shoot. It’s made by Cometa of Spain and can be very accurate with the right pellet.

The next rifle is a Diana 26 I recently picked up used at a local, hole-in-the-wall gun shop. It’s in decent shape and tends to shoot in the low 700s. A very nice rifle with the older T01 trigger, it’s another gun that is a joy to use.

And lastly, but not leastly, is my old, trusty, still-in-very-good-shape 300 fps Slavia 619. But there’s a little history here I oughta explain first.

The 619, like some other early Slavias, had a delicate post front sight. When I was a kid, I broke it off. For years, I made do with a makeshift front sight fabricated from a coat hanger and held on with a small hose clamp. When I got older, I decided to fix it right by brazing a new post in place. While doing so, I also boogered up the front 1-2″ of the bore. Still don’t know what happened, but to my horror the bore in that area got really rough and accuracy went in the toilet. Instead of seeking sage advice, I did the next worst thing: I drilled out the front 2″ of the bore with a 13/64″ drill bit and recrowned the now-recessed end of the rifling as best I could. That improved things, but it still shot poorly until I did a better job on the crown and scrubbed the bore really well with J-B Non-Embedding Bore Cleaning Compound and a brass brush. After that treatment, the bore and the crown looked REAL GOOD–but only shootin’ will tell if it’s right.

Well, that’s the lineup for this test. Next time, we’ll find out once and for all if B.B. Pelletier EXAGGERATES!