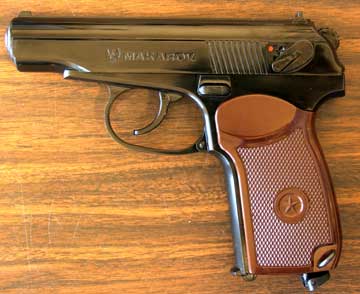 Some firearms stir my senses. The Colt M1911/M1911A1 does it, though those actually made by Colt since 1970 leave me cold. The Colt Single-Action Army was the first handgun to capture my fancy. The M1903 Springfield rifle is one that thrills me–just to look at and hold. To me, it looks like the embodiment of what a rifle should be. And I’m a sucker for almost any rifle in a Mannlicher stock.

Well, about three years ago I bought a 9x18mm Makarov–the official sidearm of the Warsaw Pact for much of the Cold War. At the time, I didn’t think much of it one way or the other, but after one-thousand TROUBLE-FREE, JAM-FREE rounds, I am captivated by this reliable little pocket pistol. In case you’re keeping score, that’s a much better record than any of my vaunted 1911s!

I bought it because the price was right, and the 9×18 Makarov ammo was priced so incredibly low for what is effectively a .380 ACP +P round. I was paying $6.95/50 at that time. The current run on ammo nationwide has raised Mak ammo prices to a much higher $11/50 level, so it isn’t quite the little plinker it once was, but it’s still more affordable than the 9×19 Parabellum round.

An ultra-reliable pistol
Besides never misfiring or jamming a single round, my little Mak is accurate, holding inside 3-4 inches at 20 yards with a one-hand hold and careful sighting. Of course, the gun is made for quick double-taps and instinct shooting and is equally well-suited to that course of fire. So, I now like Makarov pistols.

I was, therefore, intrigued to see one in the Umarex booth at the 2009 SHOT Show–a fact that I reported in part 2 of the SHOT Show report this year. Today, I’m beginning my report on the gun. The new all-metal Makarov is listed under Umarex in the Air Pistols listing on the Pyramyd Air website; and although the due-in date is the first week of May, I’m starting to tell you about it today. Due-in dates from Umarex USA are generally quite reliable, and I think you air-pistol fans need to start planning for this one.

Realism
The CO2-powered BB Mak is very close to the appearance of the firearm, as you can see from the comparison picture below. The big difference is the presence of the CO2 cartridge key sticking down from the grip.

Makarovs were made by many different nations within the Warsaw Pact. The Soviet (now considered Russian) model is the prototype of the series and is considered by collectors to be the most-coveted of all Makarovs. The East-German is No. 2 and my Bulgarian Mak is considered to be in third place. That ranking is the desirability scale that also influences the price of the firearm. Umarex wisely copied the look of the Russian Mak, which is why the grips look so different from those on my Bulgarian pistol. 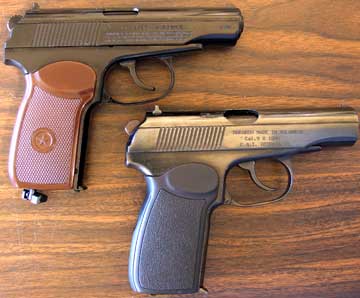 The weight of the two guns is remarkably similar. My Bulgarian firearm weighs 25.6 oz. empty and the Umarex pistol weighs 25.3 oz. empty. Add a CO2 cartridge and you add 1.6 oz., making the airgun slightly heavier than the firearm. But eight rounds of 9x18mm ammunition adds 3.3 oz. to the firearm, so the two go back and forth. 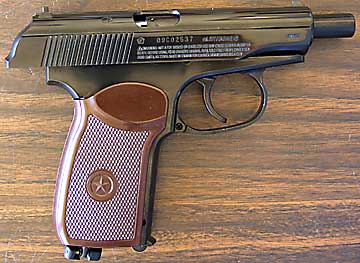 The slide does retract (however not with blowback), but the mechanism inside still fills the ejection port.

CO2 installation
The grip is a single piece of plastic that’s pulled straight back to access the CO2 cartridge. It’s captive, so it doesn’t completely come off the gun. The winding key at the bottom of the pistol grip tensions the cartridge against the seal and piercing pin. Don’t forget to put a drop of Crosman Pellgunoil on the flat tip every new cartridge before you install it. Also, don’t overwind that key. Just turn it until the gas hissing noise stops. Over-tightening leads to early failure of the seal. 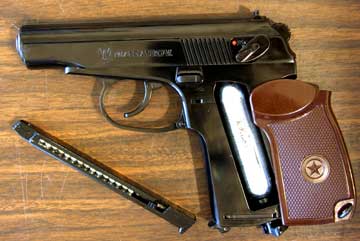 Captive grip pulls back to install CO2 cartridge. BB magazine fits into the front of the grip.

Magazine
The BB magazine is a stick-type that holds 18 BBs in a single column. The spring-loaded follower locks in place at the down position, making the magazine easy to load. The mag release is identical to the one on the firearm, except that it’s relocated to the front of the grip because of where the BB magazine is.

Disassembly
This Makarov BB pistol disassembles like the firearm. Because of what would be the operating spring in the firearm is relatively weak in the BB pistol, disassembly is even easier than for the firearm. Just hold down the triggerguard and pull the slide back and up to disengage it from the frame. Then, ease it forward and it removes from the gun. If owners will be careful when they do this, maybe Umarex won’t have to pin the triggerguard in place they way they did with the PPK/S pistol when owners began losing parts and returning their guns as defective, instead of learning proper assembly skills. 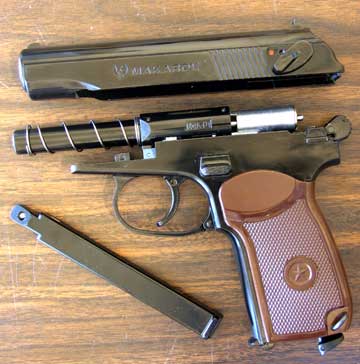 On the surface, this new Makarov BB pistol has a lot going for it, and I think air pistol fans will want to watch this report play out. 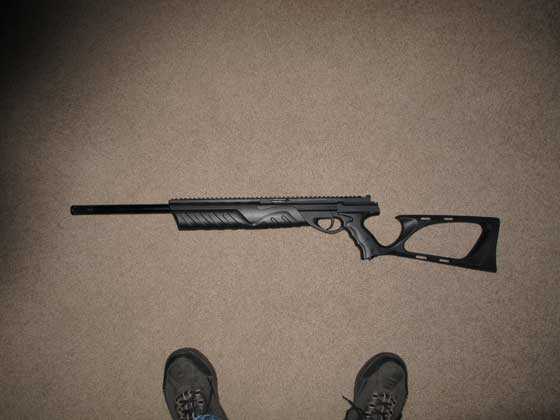