Before we begin, I have an announcement. On Thursday I’ll start the Nitro Piston review.

Today’s report is for Bob from Oz, who asked for it long ago and has been more than patient. As we consider this operation, we must acknowledge that BB guns come in many different styles, and they don’t all come apart the same way. Therefore, this report will deal with those Daisy guns made from around 1915 to around 1970, which includes a large segment of what’s on the used market today.

Older and newer guns may vary a little or a lot from the ones shown with this procedure, and there are models within the same timeframe that vary because of their unique design. Also, non-Daisy guns may sometimes vary. However, fundamentally, most inexpensive BB guns are designed and assembled in pretty much the same way. If slight differences are encountered, it should be easy to adjust your methods to accommodate them.

You will soon see that rather than a report on just how to disassemble BB guns, this is more a report on how to build a disassembly machine, because that’s what it takes to do the job. Without this machine, you need extra arms and hands at various times in the procedure.

The design of this machine was given to The Airgun Letter by the late Jerry Voich, who authored an article for us on BB gun disassembly. Let’s begin simply, shall we?

The powerplant of most Daisy BB guns is held in the gun by a spring anchor, which is a flat piece of steelplate that fits through the body of the gun. Find an easy way to remove this one piece, and the whole job of disassembly becomes easy.

The first step is to remove the shot tube. This is accomplished by simply unscrewing the tube and removing it from the gun. This is done on all guns. After this step, the guns become more specific, though the assembly of most of them remains the same.

Taking as an example the Daisy model 1938, most commonly known as the Red Ryder, we can remove the buttstock and forearm by the removal of several obvious screws and bolts. The trigger and cocking lever are then removed by removing more obvious bolts. In the case of the trigger, there’s a return spring that also comes out with the blade.

That leaves us with the powerplant, which consists of the mainspring, the piston assembly and the spring guide. Daisy calls the piston a plunger and all the parts are plunger parts. When the gun is assembled, the plunger casing (mainspring guide) is pressing backward on the spring anchor, which holds it in place. On the front end of the plunger assembly, there’s a plate that’s swaged into the tinplate body of the gun. This plate forms the front of the compression cylinder of the gun. Its backside is what the plunger (piston) rests against; and in the front, it contains the screw threads that the shot tube screws into. This part does not come out of the gun. 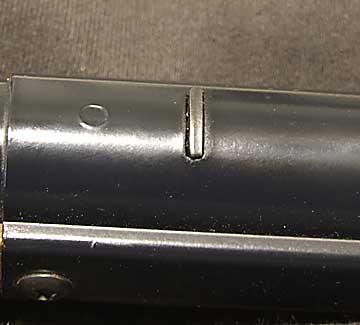 I don’t own a Red Ryder, but this 499 is constructed very similarly. On this gun, the spring anchor is just a dedicated metal plate that sticks through the top of the gun. 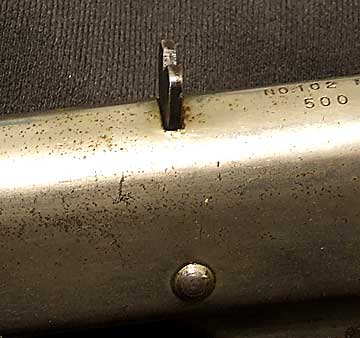 This No. 102 Model 36 is a simpler BB gun that incorporates its rear sight into the mainspring anchor.

One big secret!
The one big secret to BB gun disassembly/assembly is to take the pressure off the spring anchor so it can be removed by simply lifting it out of the gun. Then, the tension is relaxed on the mainspring, and the powerplant parts can be slid out the back.

It takes a ram with forked legs to reach around the spring anchor and push the mainspring forward, and that’s what the disassembly/assembly machine provides.

This plunger assembly is from a modern Red Ryder. On this one, the spring anchor is part of the assembly, rather than a separate part. You can see it at the bottom of the photo. This is representative of what’s inside most Daisy BB guns. The silver tube at the top of the assembly is the air tube or transfer port. It straightens out after passing through the swaged-in plate at the front of the compression cylinder. 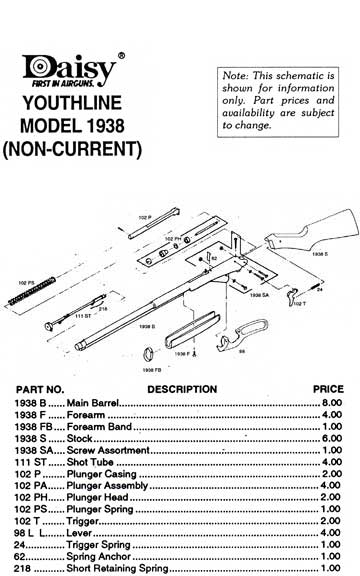 This schematic is for illustration, only. The prices are old and out of date. You can compare the plunger assembly in the photo to the older one in the schematic. Reprinted with permission of Daisy Manufacturing Company.

The machine
Once again, the credit for this machine goes to the late Jerry Voich. He was a subscriber of The Airgun Letter who wanted to share this with all the folded-metal BB gun collectors in the world. This isn’t the only design that will work, of course, but it is simple to build and straightforward to use. Once you understand what you are dealing with, taking a BB gun apart is no more difficult than disassembling any spring-piston airgun. 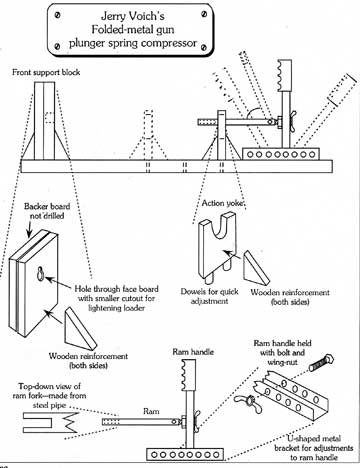 Jerry Voich’s spring compressor works with one hand, leaving your other hand available to remove parts from the gun.

One last bit of advice
I’ve disassembled several BB gun mechanisms without the benefit of a device like this, and it certainly is possible. One thing I learned while doing that is to work slowly. For example, once I remove the spring anchor, the next step would be to install it again. I would do that several times until I got the hang of working with those parts. This single step is the crucial one in the whole process, so whatever you can do to make that easier makes the entire job easier.