The Air Venturi HaleStorm is a good-looking PCP repeater.

I’ve had a sample Air Venturi HaleStorm on hand for a couple months, awaiting their arrival at Pyramyd Air so I could report on them. I want the things I cover to be in stock, or at least for them to be due in within days of the first report. Nothing worse than whipping you into a froth that cannot be satisfied!

Okay, let’s get this out of the way right now, because if I don’t the rumor mills will start cranking. This rifle is made in Turkey. Except for the repeating mechanism and the stock, it looks very similar to the Hammerli Pneuma. Testing will show how close the performance is. Rather than ask why the single-shot Pneuma costs more than the HaleStorm, I would think you would want to buy the one you want and not draw attention to it. But that’s just me.

The HaleStorm is stocked with a beautiful hardwood stock, with a high cheekpiece and an adjustable buttpad. The pistol grip has panels of impressed checkering on both sides, but the forearm is smooth. The stock is fully ambidextrous.

The shape of the forearm is very unique and quite reminiscent of the shape Ivan Hancock used on many of his custom rifles that were made in the Venom shop. A wide, flat-bottomed forearm tapers on either side of the stock into a finger groove that runs the full length of the forearm. It gives the shooter something positive to grasp; and even though airgunners, as a rule, don’t grasp their stocks with their fingers when shooting, it still feels pretty neat.

The rifle is a bolt-action repeater with a sidelever operating the bolt. A 10-shot circular clip extends above the top of the receiver, so two-piece scope mounts are necessary. I’ll tell you more about how that clip is installed in the velocity testing report.

The open sights have fiberoptic inserts front and rear and will be considered good open sights by those who favor them. The rear sight is adjustable for both windage and elevation with a crisp ratcheting mechanism. And, by the way, this front sight also adjusts for elevation, which adds to the range through which the open sights can be adjusted. 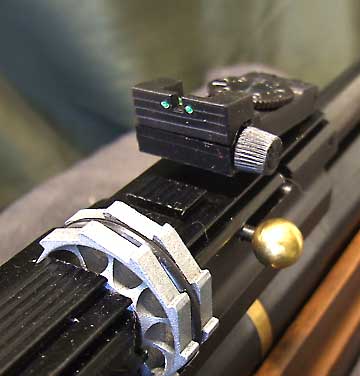 The rear sight adjusts crisply in both directions. 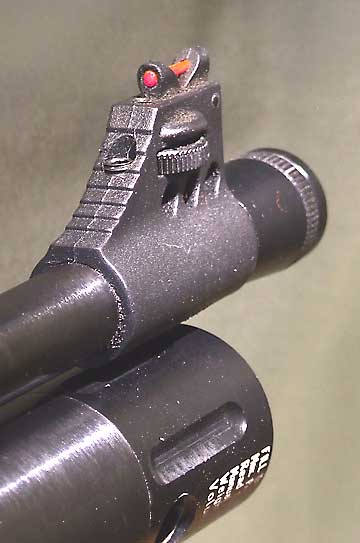 The front sight can be removed and also adjusts for elevation.

Because the HaleStorm’s receiver is lower than most PCP receivers, you’ll need to use high rings, or you can select scopes with smaller objectives (32mm or less) to clear the barrel if you want to stay with medium-height rings. Low rings are out of the question for most scopes, except for those with no swelling in front or back, and would require removal of the rear sight.

The rifle I’m testing is in .22 caliber, so you get a chance to see how that performs compared to the .177 Pneuma I’m also testing. Like the Pneuma, the HaleStorm has a scope mounting rail that accepts both 11mm dovetail bases and also Weaver bases, which have a wider dovetail. There’s a Weaver slot for the key in that base, but the 11mm bases don’t have to use it. This setup gives users the widest possible range of scope mounts to select from. 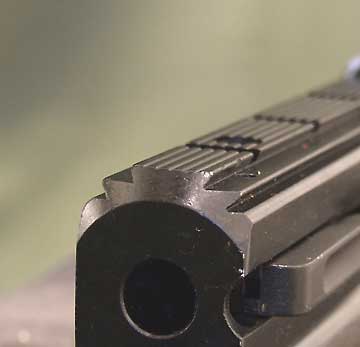 The scope rail will accept both 11mm scope rings and Weaver rings.

This rifle also has a muzzle cap that unscrews to reveal 1/2×20 threads. If you own a legal silencer, this is the perfect mount. It also allows you to remove the front sight assembly, which is pressed in place and held with a locking screw. Personally, I wouldn’t bother, because I cannot see a hint of the front sight with the scope set to 3x and focused to about five yards. The front sight looks good right where it is.

The barrel is connected to the rifle at the receiver and also through two synthetic hangers located halfway along the reservoir. It is completely free-floated at the muzzle, so I guess it’s a semi-free-floated barrel! There’s no such thing; and if the reservoir moves, the barrel will, too, but I can’t think of a better description.

The onboard manometer (air pressure gauge) reads in bar, as you would hope, so there is no conversion required when you fill the gun. A synthetic plug is inserted in the fill port when the probe isn’t there to prevent dirt from entering.

So, how does this rifle stack up against other PCP repeaters? Well, the tests still have to be done, but in terms of power, this rifle is under 30 foot-pounds, so it’s in the Marauder class. It’s not quiet, so expect noise when you shoot. It’s a sidelever like the Blizzard S10, but this one will have more shots at less maximum power. Finally, there’s that great price. After the Benjamin Discovery, the HaleStorm is the least-expensive precharged rifle around. So, if it’s accurate and as powerful as advertised, I’d say we have another good entry-level PCP from which to choose.

Do breakbarrels loosen at the joint?