It’s been a while since I wrote part 1 on this rifle. You may remember that I showed you the velocity, so today I’ll complete the report with accuracy testing. Of course you aren’t going to mount a scope on one of these by any normal means, so I’m shooting with open sights today.

Somebody mentioned that Pioneer means “Boy Scout” in Romanian. Actually, the Young Pioneers was the Soviet group that most resembles our Boy Scouts, but they are not the same organizations. The Young Pioneers were a paramilitary organization that rose from the ashes of the Russian Boy Scouts after the fall of the Czar. They did pretty much the same things as scouts, and also guarded military tombs and received limited military training. They were a youth adjunct of the Soviet Communist Party. Both boys and girls were in the same organization. Their motto, “Always Ready,” is an outgrowth of the Boy Scout motto, “Be prepared.”

Is there a connection between the rifle we’re examining and the Young Pioneers? I have no information about that, but perhaps some of our readers may know. At any rate, there’s no doubt that this is a youth rifle, designed for kids to cock and shoot all day. As such, it pulls at the heartstrings of many shooters who want nothing more than a lightweight, easy-cocking plinker to pass the time with. Today, we’ll see if this is the one. Vince has warned us that it isn’t, so we’ll see.

I figured 10 meters was a good test for a plinker, and of course the 20-shot group still holds. But for starters, I stood about 20 feet from the target and fired a 5-shot group with the first pellet I planned on using just to make sure the gun was on paper. Let me show you what that did. 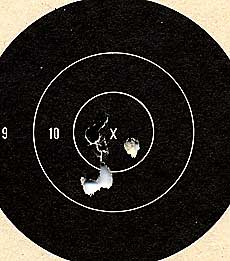 The first five shots were Gamo Match offhand at 20 feet. This was just to ensure that the gun was hitting on the paper. I used a 6 o’clock hold for this well-centered group.

Two things were learned from those five shots. First, the rifle is reasonably accurate. Second, the single-stage trigger is very hard and stiff. I measured it at a repeatable 7 lbs., 8 oz. But the group didn’t look bad for starters. Then I moved back to 33 feet and shot 20 shots from a rest. Because I thought the group might climb when shooting from farther back, I tilted the 10-meter pistol targets sideways, so the bullseye would be lower on the paper. That’s why all the targets are printed on what looks like an angle. 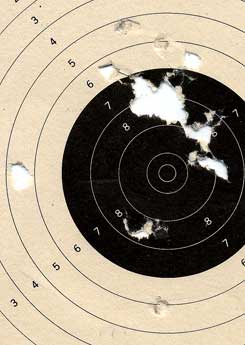 While cocking the rifle, I reflected that this was one of the easiest breakbarrels I had ever cocked. The bathroom scale confirmed that with a reading of just 9 lbs. to cock. That makes this the leader in cocking ease!

A second pellet I tried is a lead-free target pellet that’s not yet on the market. I have them to test in lower-powered spring rifles, and this one certainly qualifies. 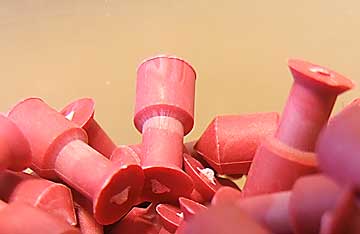 This lead-free target pellet wasn’t bad. It’s not on the market yet. 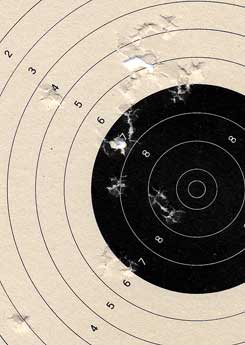 Twenty lead-free target pellets shot about the same as the Gamo Match. Not quite as wide but a little more vertical.

Surprisingly, these plastic pellets shot about as well as the Gamo Match, which I didn’t expect.

The RWS Basics shot best in this test. They disbursed about half as far as the others, with all but a few going into one tight group. Remember, please, that I was shooting with crude open sights and with a 7.5-lb. trigger! 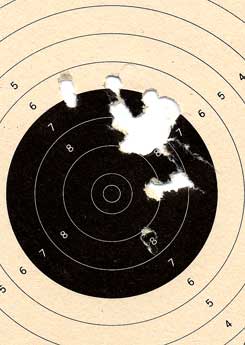 RWS Basics were the best–going into a smaller group with most going into the same hole. The target is displayed as it was shot–on an angle.

The significant improvement with the Basics lead me to believe there might be pellets that are even better. Vince said this gun is like a BB gun, but this one is just a little better than that. Not a lot, mind you, but it’s good for a minute-of-pop-can at backyard distances.

That’s going to be it for this gun, if you don’t mind. It was fine for it’s intended purpose; and in today’s terms, perhaps a bit overbuilt. 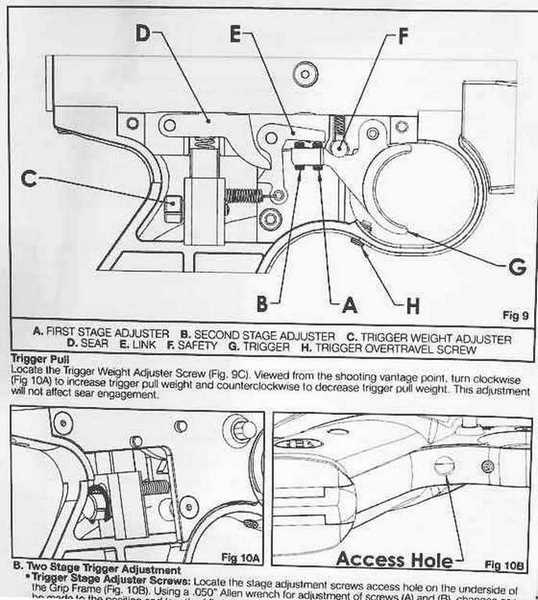