I always feel guilty when I get this far off track, because I know fewer of you will be interested. But Fridays are my “play days,” and I try to write about light topics, because I know you just enjoy chatting with each other all weekend.

Having said all that, I think most people need at least one tactical flashlight. The reason? Simple! Tactical flashlights are the highest form of flashlight and they have more than one purpose in life. A regular flashlight is for seeing in dark places, but a tactical flashlight is for something else. A real tactical flashlight can also be used to temporarily disorient and even blind an assailant, giving the user time to either run away or defend himself in some other way. Here at Pelletier Acres, we are armed with the .45 ACP, so anyone who hears me yell, “FREEZE, DIRTBAG!” would be well-advised to cease and desist. Actually I plan to yell something more colorful than that, but Edith advised me not to print it here.

Edith once asked me to demonstrate how I would do that (the yelling, I mean) and even though I warned her what I was about to do, she was still visibly shaken when I did it. So I still got it, and it still works!

The part the tactical flashlight plays in this drama is it overloads the optic nerve and disorients the person. When combined with a persuasive command, this can force many people to comply with the verbal order. Even those less inclined to cooperate cannot avoid temporary night-blindness caused by the intense light.

So what?
Okay, you say, but everybody knows that B.B. is a paranoid dinosaur who fantasizes that he’s living in the wild west. I’m perfectly safe in my apartment here in Gotham and, if there is trouble, well, isn’t that what 911 is for? Boy, will I be glad when these paranoid old silverbacks are all dead and gone, so society can finally progress as it was meant to.

All right, you and I see life differently. But you still need a tactical flashlight! Check THIS out.

Old B.B. likes to ride his bicycle in the mornings before the sun rises. He wears a helmet and has lights on both the front and rear of his bike, plus he stays within the safe confines of his housing development. What could possibly go wrong?

I have used my most powerful tactical flashlight on several mean dogs who seemed to be out to get a piece of me. I started with the cute little white terriers down the street who like to bark and chase my bike as I ride past their house. When I hit them with the light early in the morning, they stop running and whine for a moment. The next morning they are right back at it, with some reluctance to leave their yard. These little cuties are no real threat, but they demonstrated that the light worked.

Then one rainy morning when I was walking the neighborhood and a large dog came at me in absolute silence from the rear on an intercept course, I was relieved that the light had the same effect on him. After he stopped I walked up and spoke to him in a low, commanding voice. He remained in place, presumably blinded for a few minutes, and when he started moving again, he walked away from my path. I was already about 500 yards away, but I kept my eye on him, just in case.

So, the light worked as intended. But that’s not the only reason for owning one.

Things that go “bump” in the night
One morning, Edith woke me at 1:30 a.m. because of a disturbance on the back porch. She thought someone was breaking in, so I took my tactical flashlight and gun and went to the window. There in the light was a large possum! I shined the light on it for about a minute, then went to the back door to the porch. As I passed the living room, I saw that both cats were glued to the floor-length window, watching the porch in rapt silence. Just what I always wanted–silent watch cats! They note everything that happens around your home and keep it in the strictest confidence!

When I opened the door to the back porch, mister opossum had left the building. That was good, because I certainly was not going to shoot him with a .45 at two in the morning! As far as I can tell, he has never returned. The cats tell me nothing.

A tactical flashlight is an intense spotlight that can be used for general seeing as well as forcing compliance. Many of them are rated in lumens, and 100 lumens is considered the bottom threshold for forcing compliance in the way mentioned above. But I can tell you that a light with 65 lumens used correctly can do a lot. My first, second and third lights were all from Crosman. The first came with one of their guns, but number two and three I picked up at the Roanoke Airgun Expo for $5 each. The two CR123A batteries inside them cost more than that, so it was a no-brainer. The switches on two of them have already failed, so I am down to just one at present. My most frequent use for them is as a fill light in long-exposure photos. Remember my report on “painting with light?”

It seems that Crosman no longer sells their light separately. But all is not lost!

UTG tactical flashlight
My friends at Leapers make the UTG tactical flashlight. It’s sold in the airsoft equipment section and flashlight section and costs just $30. I know that’s a lot more than the $5 I mentioned before, but that was apparently a one-time, you-had-to-be-there special deal. This one has 95 lumens, so it’s pretty much the real deal. It has a regular pushbutton/twist-on switch in addition to the pigtail gun switch you see in the description, so you can use it normally.

For more power, this flashlight/laser combo puts out 126 lumens for just over $50.

Want even more? This UTG light puts out 260 lumens and has a police-rated body configuration that makes for easier handling. It’s the highest output I have found for under $50.

Beamshot
While at the 2009 SHOT Show I was given two Beamshot lights to evaluate. One is a one-cell (CR123A) PD3 compact light that puts out 180 lumens. It has a switch for the full-power light, a strobe effect or you can adjust the light down to 15 lumens for just seeing. With the latter, the battery lasts a lot longer. The strobe is highly effective in producing compliance, because the human eye cannot adjust to it. This one is a serious light with law enforcement recognition. Expect to pay around $80 on the street. 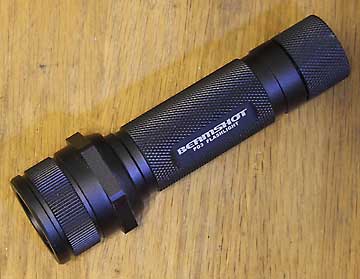 Beamshot PD3 uses just a single CR123A cell to generate 180 lumens of light. It is compact and feature-filled.

I also have the Beamshot TD4, a 240-lumen light with the same operational features as the smaller light, only instead of a single button on the end controlling it, there are three–one for each function. It also has a built-in SOS signal function. Set it and it continues to flash the distress signal without your intervention. This larger light uses two CR123A cells. This is the most powerful light I own and it is certainly capable of rendering a subject blind temporarily. The bezel has hardened points for breaking glass in an emergency. Expect to pay around $150 for this one. 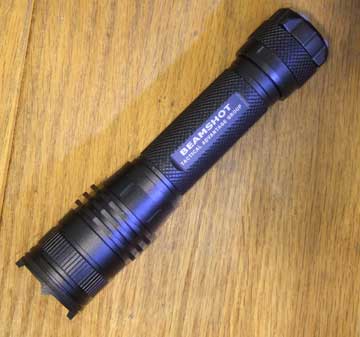 Fenix
I saw the Fenix TK10 light at the SHOT Show and was so impressed that I asked for it for Christmas. It’s a 225-lumen light housed in the most rugged body on the market. I watched a video of the light still functioning under 20,000 lbs. of crushing pressure. The switch is simpler than those found on either of the two Beamshots. There is an on/off button that doubles as a pulse button. That’s it. What you lose in functionality you gain in a lower cost, ruggedness and reliability. This model sells for slightly less than $80. 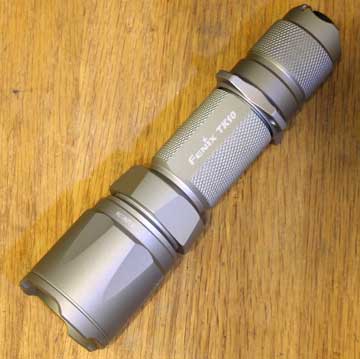 My Fenix uses two CR123A cells for 225 lumens. It has a pushbutton pulse switch that also turns the light on and off.

This is my go-to tactical flashlight. A year ago, all I had were the Crosman lights, but I’ve made it a point to gather as many as I can. I use them to augment my defense firearms, and these are weapons I can use with no lasting effects. I have already told you how I use them.

Other survival lights
For more than a year, I’ve been using a dynamo flashlight from John Deere. You wind it for 2 minutes and it shines for 20 minutes. I just got an NRA dynamo flashlight to add to my collection. It even has a DC outlet port for charging your cell phone! I use these flashlights around the house exclusively to save the batteries of my tactical lights. 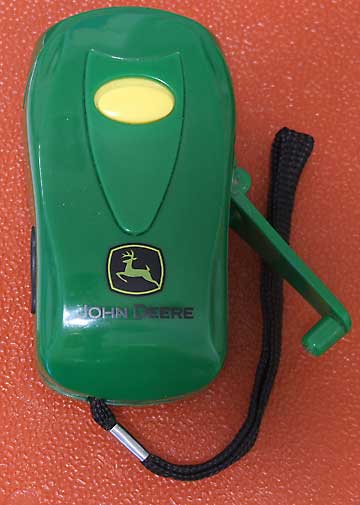 The NRA sells this dynamo flashlight that also serves as a cell phone charger. This one is larger than the John Deere and is the right size for the glove compartment or tackle box.

Small wonder!
The Streamlight nano is a tiny flashlight just larger than a quarter and puts out a full 15 lumens of light. That makes it as bright as a standard flashlight using two D-sized cells. 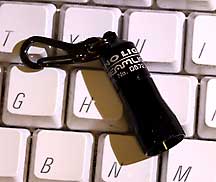 A Streamlight Nano is tiny but puts out about the same light as a flashlight running on 2 D-cell batteries. It uses watch batteries and operates for 8 hours on one set.

Flashlights are mundane until you need them–then they’re priceless. I’ve shown you some here that have multiple purposes, including defense. This is just one category of equipment that belongs in a bugout bag. 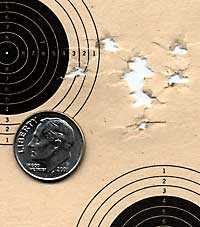