This .22 NPSS finished well in the accuracy test.

Well, the results are in! The Crosman Nitro Piston Short Stroke is a winner! But there are some things you need to know.

First, The scope we all wondered about performed fine. It proved to be clear, sharp and easy to adjust. I shot at 25 yards and the scope bisected the bullseye very clearly. I don’t think you need to upgrade from this glass.

I didn’t appreciate the one-piece mount packed with the rifle, though. It forced me to position the scope slightly too far forward for benchrest shooting. It probably makes good sales sense, because so many people find one-piece mounts easier to install than two-piece mounts. I don’t look for Crosman to change their strategy. And for offhand shooting this mount is fine.

A reader named Jay mentioned that this rifle is sensitive to hold, and he posted a link to a forum where he posted a lengthy report on his attempts to overcome the hold sensitivity. Jay shoots a .177 and I’m testing a .22, so of course we cannot compare things exactly, but I do agree with his observation that the NPSS is hold-sensitive. However, it is only sensitive in one way, I discovered, and the rifle will shoot very well if you overcome this issue.

The artillery hold has a component that I don’t normally discuss, but which with some guns like the NPSS is very critical. That is something I will call “hold deadness.” What it means is the tendency of the rifle to move when you relax your hold.

I discussed this in great detail in the R1 book. I said that after you align the sights on the target, you should close your eyes and relax. When you open your eyes again, the crosshairs should still be on target. If they aren’t, a shot from that hold will be thrown in the direction the scope or sights move when you relax. Most rifles are not this sensitive, but when you have trouble getting one to shoot, try this and see what happens.

The simple name for this procedure is follow-through, only I’ve never seen or heard anyone explain it this way. The usual explanation for follow-through is that you don’t move the gun after the shot. But true follow-through requires a gun that cannot move because the hold is completely neutral. Few shooters know that and fewer still practice it because it takes a lot of discipline. But that’s what you have to do to allow the Crosman NPSS to group. That and the right pellets, of course.

A word about the test
This test is to judge the accuracy potential of the rifle. I don’t want the pellets to hit the target where I aim because they will soon make it difficult to acquire the target when it’s blown away. So, I’ll purposely not let the pellets hit near the center of a bullseye. Once the’re impacting in a safe place, I will start the group and run it for 20 shots. The size of the group and the number of flyers will tell us how accurate the rifle is.

Sight-in was fast and quick. The scope was on-target at 25 yards after a single shot at 10 feet. Of course, more fine adjustment was required, but at least it was on the target paper.

Crosman Premiers
Crosman Premiers are not the right pellets! The groups they shot resembled shotgun patterns at 25 yards. And no amount of follow-through made any difference. The group was over three inches in size after seven shots, so I stopped shooting. 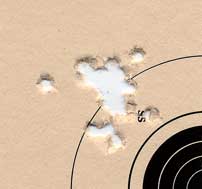 Twenty Air Arms domes grouped relatively well at 25 yards. The shots that appear to be flyers are mainly caused by improper follow-through.

RWS Hobbys
Because they did well in velocity testing, I decided to try RWS Hobby pellets in the accuracy test as well. They did not disappoint. 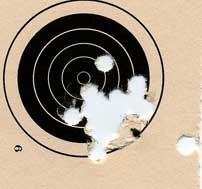 RWS Hobbys also grouped well for 20 shots. The two that appear to be flyers were definitely caused by a lack of follow-through, but I had better form for more of the shots on this target than on the other. Hobbys just don’t group quite as tight as Air Arms domes.

Summary
Crosman’s Nitro Piston Short Stroke is a winning combination spring-piston airgun. The gas spring is very quiet, the rifle has good power and, as we see in today’s report, it’s also very accurate. The trigger is quite pleasant and the scope is a keeper. Just keep in mind that the cocking effort of this rifle is on the high side. This is one for adults and for those who don’t mind using their muscles.