My real motivation
It’s time to let you in on a secret–the real reason I find the Webley Senior to be so fascinating. As a maturing lad of 13, I’d saved my paper route money to buy an airgun. My mother had only recently relented from her “no BB guns” posture after seeing that I could be trusted with one. She took me to the local discount store in Cuyahoga Falls, Ohio, to make my purchase. I remember having just a bit more than $20 to spend.

There were three air pistols for sale in the store: a Crosman Single-Action Six for $12.95; a Crosman 600 repeater for $19.95; and a Webley Senior for $29.95. I really wanted the Webley in the worst way, but the money wasn’t there, so it fell to a choice between the two Crosmans. I chose the SA-6 on price because I could see that powerlets as well as pellets were required. Those were the awful days of “bottlecap” powerlets that leaked before and after they were installed in a gun. I felt lucky to get 30-40 shots from a good one. That experience turned me into a confirmed anti-CO2 airgunner for several decades to come and gave me a bad taste for the SA-6 (which remains to this day). Who knows how different things might have turned out if I’d bought the 600, instead? But it was the untouchable Webley Senior that made the biggest impression of all.

The memory of leaving that fine, all-steel air pistol at the store remained with me like the ghost of a lost love, to become part of a lifelong fascination with airguns. There aren’t many better ways to appreciate our great hobby than by owning and shooting a Webley Senior pistol.

A Webley is a relatively easy air pistol to disassemble and tune. You could take advantage of this and do a few simple things that will improve your lot, no matter what state the gun is in. Following these instructions, you could also replace most of the wear-out parts in the gun. Even if you don’t do these things, the following is a good lesson in how your air pistol is constructed.

The only part that won’t be shown here is the breech seal, and we’ve already seen that. To replace it, you must first dig the old one out of its seat. A small screwdriver or sharp, pointed instrument is needed to dig it out. It’s a matter of prying and patience. The seal is longer than you might imagine, but you should have the new one standing by for replacement, so you can see what you’re up against.

Once the old seal is out, clean the seat so the new one fully seats. Installing a new seal is a simple matter of centering it on the seat and driving it all the way home with the Webley seating tool. If you don’t have a Webley tool, use a pin punch that’s very close to the outside diameter of the seal. A few taps with a plastic hammer is all it takes. Be sure the seal goes in straight, lest the sides of the walls cut the seal going in. Also, take care to stop pounding when the seal has bottomed out, as you can flatten this seal beyond usable length. Try closing the barrel as you get close, and you should know when the job is done.

CAUTION: Before beginning this work, ask yourself if you should be doing this. The Webley is a spring gun and can throw its parts with enough force to injure people and damage property. If, after reading the following procedure completely, you do not feel confident that you can do the work safely, DON’T ATTEMPT IT! Have a qualified airgunsmith do the work for you.

FIRST–ENSURE THAT THE PISTOL IS UNCOCKED AND THERE IS NOTHING IN THE BARREL!

Pistol disassembly
1. Remove the short screw on the left side of the end cap first. This screw is used to spread the end of the long screw on the right of the end cap–to hold it in place. Once the left screw has been removed, remove the right screw. Note that this screw is also the axle around which the barrel rotates during cocking. When the gun is reassembled, this screw will be specially lubricated to help with the tremendous load it must bear. 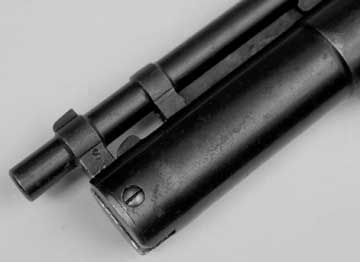 The left screw is removed first. Its only purpose is to anchor the end of the screw on the right. 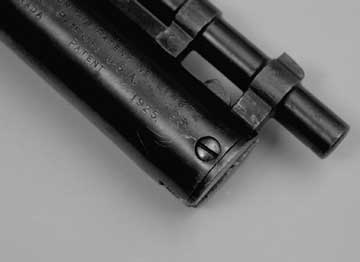 This is the long screw that also serves as the axle for the barrel.

2. With both screws out, you can now pry the barrel lug from the end cap slot. Once the lug is free, the cocking linkage can be easily removed from the disassembly hole on top of the receiver. That’s the enlarged hole at the breech end of the cocking slot.

CAUTION: In step 3 (below), you’ll be releasing the mainspring of the pistol. Take every precaution to keep the end cap under control at all times, as it can suddenly fly off the gun with enough force to cause serious injury and damage! Read this step completely and be sure you understand it before starting. 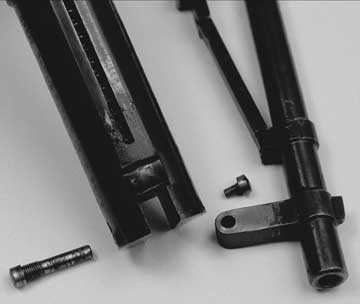 With both screws removed, the barrel lug can be pried out of its slot. Once free, you can move the barrel link to disconnect the cocking linkage.

3. With the barrel lug removed, it’s possible to unscrew the end cap from the receiver. If the gun has never been disassembled, the end cap may be difficult to start unthreading. It’s a normal right-hand twist thread. 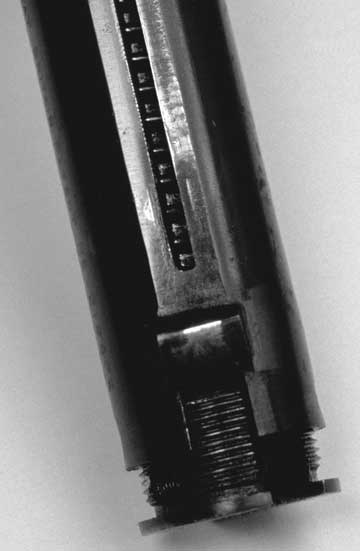 The end cap unscrews from the frame.

For end caps that are tight, chuck a box wrench in a vice, with the end of the wrench sticking straight up. The wrench you select should just fit inside the end cap slot but be smaller than the receiver slot in which the end cap is threaded. This box wrench is essentially a very large screwdriver bit, whose rounded ends aren’t going to leave marks in the metal of the end cap.

With the wrench held tight in the vise, you can set the pistol down over the box end (inside the end cap slot) and turn the gun using the grip of the pistol. The torque that can be applied this way is enormous, so take extra care to fit the box wrench end to the end cap slot as close as possible and go slow! You could literally ruin the entire receiver if the box wrench extends too far and catches the receiver walls, too.

Many guns will not require such drastic measures. Their end caps will have been removed several times before, and they’ll twist off with little effort.

When the end cap is down to the last three or four threads holding it in the receiver, it’s time to take matters into hand. Put some kind of rag around the end cap to cushion your hand and, holding the gun in one hand, rotate the end cap with the other hand until the cap is free. The mainspring will push the cap free of the gun for several inches, but the push is not so powerful that it cannot be controlled by an average adult. There is between 25 and 40 lbs. of spring force pushing on the end cap. 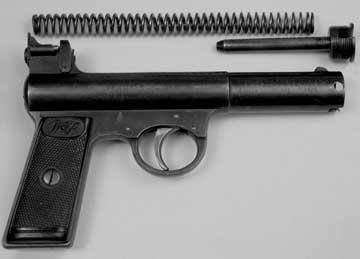 Note the length of the mainspring. There’s still a piston in this gun. The end cap has the spring guide built in.

Also, note that the mainspring guide is an integral part of the end cap.

4. The next step is to remove the piston from the gun. You can gently pry it along with a small screwdriver through the cocking slot. Keep the trigger fully depressed as you go, because the sear must be retracted for the piston to fully clear it.

When it’s removed, you’ll see a ring of steel just behind the piston head. This is actually the catch on which the sear rests when the pistol is cocked. If you don’t have the trigger fully pulled, there’s no room for this ring to clear the sear, and the piston simply refuses to come out.

Here you can see the famous piston ring Webley used to have. The flange behind it is what the sear holds onto.

Note the famous piston ring, which is the piston seal on this gun. Webley employed a more conventional piston seal in their modern pistols. Actually, the modern seal does a better job, but the older ring is a nostalgic engineering touch from the golden era of quality airgun manufacture.

This ring is made of beryllium copper, an alloy selected for its longevity in applications where flexing is required. Great Western, the American company that made inexpensive replicas of the Colt Single-Action Army revolver, used beryllium copper for the fragile bolt–another part that flexes with use.

This is as far as we’ll disassemble the pistol, as all cleaning and relubrication work may now be done. Even the sear, which is still in the gun, is fully accessible at this point in the disassembly. If you want to go further, the pins that retain the sear and triggerguard must be removed.

Clean all parts thoroughly, removing grease and crud as you go. The mainspring should be checked for straightness at this time. Roll it on a flat surface, such as a table top or a pane of glass, and watch how it rolls. It’s easy to spot a kinked coil this way.

Webley uses springs made from flat wire, to allow them to be more fully compressed. Because there’s less metal in such wire than there would be if the stock was round, the wire will wear out faster over time and with shooting. You can expect some small amount of bend to almost every Webley pistol mainspring because of the type of wire used, but a badly kinked spring should be replaced.

A chronograph will tell the story very quickly. Expect a .22 pistol in good shape to shoot medium-weight pellets in the 350 f.p.s. range. A .177 should do 450 f.p.s. with medium-weight pellets. If the numbers are more than 50 f.p.s. low, a new spring is probably needed, although the gun will still function for years with the old one. 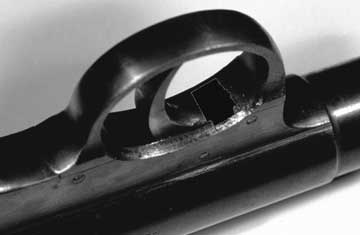 You can lubricate the trigger and sear through the vertical slot just in front of the trigger.

5. You can lubricate the sear through the slot in the bottom of the receiver (which is at the top of the triggerguard) and through the receiver tube–once the piston is out of the way. I use Beeman’s M-2-M moly paste on mine, but any good gun grease can be used.

For lubrication, I use moly paste on those parts subject to hard wear–such as the sear, the barrel pivot pin, the cocking linkage and slot, the mainspring guide and the sides of the barrel lug that bear on the end cap. Use a very light amount of light grease on the mainspring, as too much heavy stuff quickly slows down the gun. The trigger linkage can be lubed with any good gun oil; although if it’s disassembled, moly can be applied to each part directly. I also like to put moly on the piston-ring area and the steel ring that serves as the sear catch.

After that, it’s just a matter of reassembly in reverse order of disassembly. Don’t forget to squeeze the trigger as you insert the piston so it’ll clear the sear.

When the job is finished, wipe down the gun’s metal parts with Sheath or some other gun oil that neutralizes fingerprints. That’ll keep your Webley looking good for a long time to come. And now you know how to keep it shooting good, to boot!