While I’m in New York filming the TV show, I thought you’d be interested in this lengthy article I wrote in 1998 for Airgun Revue #3. 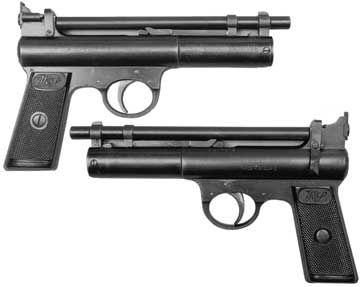 Webley Senior with the so-called straight grip (even though it has a small backward rake).

The Senior wasn’t my first Webley air pistol. I had owned two Premier Mark IIs–both in .177–before buying the first Senior. And before I saw that first one, I would have told anyone who asked that the Premier Mark II was a very nice airgun. But the early straight-grip Senior I got for $75 at a small gun show in Kentucky went way beyond that.

The first model Senior is now called the straight-grip, even though there’s a small amount of rake or backward angle to the line of the grip. Compared to the later, or so-called slant-grip models, this one appears to have a grip that’s at a right angle to the barrel. Hence, the name. 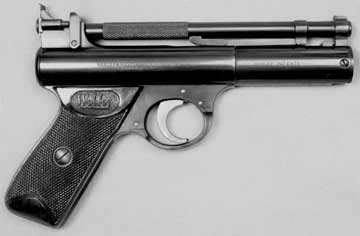 A slant-grip Senior is one of the all-time classic air pistols. It’s better-finished than handguns costing much more.

According to author Dennis Hiller, in his Air Pistols book, the first model straight-grip Senior was produced from 1925 through 1930. Only the Mark I, which may have been made as early as 1923, pre-dates the Senior in the Webley air pistol line.

Since the beginning, in the 1920s, Webley spring pistols have all shared a unique cocking linkage that sets them apart from most others. It’s one of the aspects that defines the Webley. The cocking lever is also the barrel! It’s hinged at the front and loose in the rear, so you pull it up and forward to cock the gun. That holds true for a Senior made in 1925 as well as a Hurricane made in 1995. 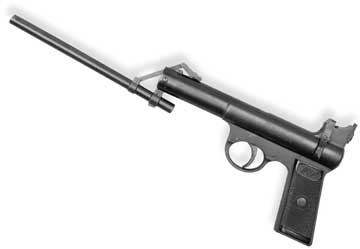 Cocking the gun was unusual in its day, but not so today–the Beeman P1 cocks in the same fashion.

To cock the gun requires that the shooter invert the cocking hand to use the thumb as a fulcrum. At first, it’s a bit awkward; but with practice, it becomes second nature. And the Webley cocking linkage really multiplies the mechanical advantage of this arrangement–to the point that these are very powerful, yet compact airguns.

Today, this barrel-cocking linkage doesn’t seem as strange because of all the other models that have adopted it. The Weihrauch 45–known in the US as the Beeman P1–is one notable example; but the total number of spring guns with this type of linkage is actually quite large. Even modern single-stroke pneumatics, such as the Gamo Compact and the Webley Nemesis, use a similar arrangement, though the forces involved in the cocking stroke are reversed.

In 1935, the Senior was changed to the slant grip, which lasted through many other small changes until the model evolved into the Premier in 1964. We’ll look at the slant-grip version in a moment, but first I’ll tell you about the earlier model.

The straight-grip Senior is an all-blued steel pistol weighing 35 oz. and having a grip similar to a broomhandle Mauser–thin gripping area with lots of forward weight. By today’s standards of ergonomics, it’s a dinosaur.

Power and accuracy are comparable with the modern Tempest pistol, but the straight-grip Senior is harder to hold steady because of the grip. As with all Seniors, a lever on the left side of the frame is conveniently located for the thumb of a right-handed shooter to release the barrel for cocking. Lefties were forgotten with this one!

The Senior has Webley’s double-jointed cocking link atop the frame, joining the cocking lever with the part that retracts the piston. This link serves to make the power of cocking change directions by 90 degrees, with greater efficiency than the earlier single joint on the Mark I.

There’s something very curious about the markings of Seniors, but I haven’t been able to figure out why it is done. The word Senior always has quotation marks around it–even on the frame of the gun, itself. What was Webley trying to say? Was this NOT a Senior; or was someone in the company trying to proclaim the Senior name very loud, for all to notice? I don’t think we will ever know for sure. Suffice to say, all Seniors to the end of production were actually “Senior” models.

My straight-grip model came with a worn-out mainspring, which is not uncommon in Webley pistols. They use a flat-section wire coiled in the standard fashion and under a fair amount of pre-compression. The flat wire apparently breaks down faster than a round wire would, so there’s a regular cycle of aging to these springs, even when the guns are not shot a lot. John Groenewold (847-566-2365, Central) sells new replacement springs and other parts, so it never needs to be a problem for owners to keep their pistols in top shooting form. A new spring in my .22 caliber gun brought velocity back from about 275 f.p.s. with 5.6mm Eley Wasps to 350 f.p.s. 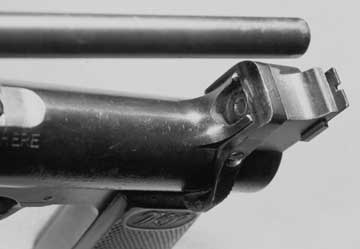 The fiber washer that seals the air transfer port can be seen. The metal liner keeps the airway open.

The other major wear-out part in a Senior is the breech seal, where the rear of the barrel mates with the frame. This is a fiber washer with a copper or brass reinforcement in the middle to keep the air transfer port open. The piston in the gun moves from front to rear, so the high-pressure air must change directions 180 deg. to get behind the pellet. A manifold in the frame is where this takes place, and the fiber seal is the final part of the pathway to the barrel. In my experience, these seals can look pretty bad and still function fine, so check them before replacing on looks, alone. Talcum powder sprinkled at the top of the barrel/breech seal will show how much air is escaping when a shot is fired. Some escape is normal, but a huge cloud of powder means it’s fixin’ time. Be sure to thoroughly clean off all powder after this test is finished.

The piston is sealed by a beryllium copper piston ring that will last many lifetimes if not abused by curious owners. At the low power level of the gun, it works fine.

The barrel of my straight-grip gun is bored very large. Most .22 pellets are way too small for it; fortunately, Eley makes a 5.6mm pellet that fits. As a result, I shoot Wasps exclusively in this gun. There’s also an imperfection in the bore about halfway through the tube, so someone in the past may have damaged the barrel while cleaning. It’s so easy to do.

The rear sight is a marvel of simplicity that we seldom see on guns anymore. A single screw is loosened to allow the sight notch to slide both vertically and horizontally. It isn’t easy to adjust, but it does provide fine adjustment possibilities in both directions.

Shooting the gun is a real trip! The single-stage trigger has a smooth pull that’s very heavy in today’s context. You can’t horse it and expect accurate results. It demands a steady, smooth pull to the release point, where it breaks like the proverbial glass rod. I put moly on all the trigger parts during the mainspring replacement, but it wasn’t really necessary. The gun came to me with a great trigger.

The only parts on the entire outside of the gun that aren’t blued steel are the black plastic grips. They’re thin, solid panels on either side of the grip frame and are very reminiscent of firearm grips of the early 1900s. I had several Colts with similar ones. 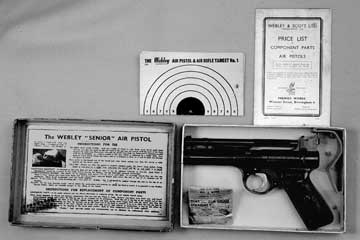 When you have all the related paperwork for an airgun, the collector interest really rises.

My slant-grip Senior (also marked “Senior”) is a model made in the early 1950s, according to Hiller’s book and documents that came in the original box that accompanied it. The angle of the grip frame, plus the extra thickness and roundness of the grip panels, themselves, makes this a much easier gun to shoot accurately. It has much less muzzle-heaviness than the older gun and seems to conform to the hand more like a Luger. 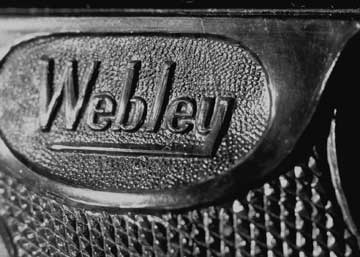 The “crack” in the left grip panel of slant-grip Seniors and Premiers is a fault in the mold. Some will have it, others won’t.

Speaking of the grips, this is the gun that we reported on in The Airgun Letter in November 1994 as having “cracked” grips from the factory. As reported, there’s a flaw in the mold from which the left grip panel is cast. It looks like a hairline crack running vertically down through the “Y” in the name Webley. Dozens of collectors confirmed that this flaw can be found on many Webley grips from the 1950s through the Premier models of the early 1970s, although not all of them have it. It isn’t really a crack, it just looks like one.

This pistol came to me in almost excellent condition, except for a few unfortunate spots of localized pitting that look like blood spots under the front of the mainspring tube. If that’s not what they are, then some other kind of acid was spilled on the gun and allowed to remain. The end of the box is still faintly marked with the original price: £7-11-0.

From the rest of the almost-complete finish, it’s easy to see that Webley wasn’t spending the same time preparing the metal in 1950 that they did in 1930. The gun has an acceptable deep black finish overall, but it’s a long way from a master bluing job. Still, when compared to most firearms sold today, the Webley comes off as the better gun.

The trigger on this gun has changed very little from the one on the straight grip, but this one is lighter and easier to use. Coupled with the better grip, it makes this the easier gun to hit with.

The barrel, which is also a .22, is just as large as the one on the older gun, so you really do need a source of large-sized pellets. If you can’t find Wasps, RWS Hobbys will do.

The barrel ends flush with the end of the mainspring tube underneath, giving the slant-grip a sleeker profile than the straight-grip. Versions with longer barrels were produced in both model variations, but the flush barrel is by far the most common.

I paid $150 for this newer Senior to a man who advertised in Airgun Ads. It came with the original box, instructions, a price/parts list and a paper envelope of pellets–the ones that came with the gun when it was new. At the time I bought it, I thought it was a super deal; but over the years, I’ve seen many Seniors in similar condition go for about the same price. I’ve also seen a few priced around $250, which is much too high for such a common gun. 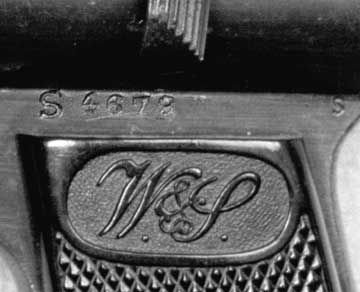 The serial number of the straight-grip Senior was later replaced by lot numbers.

Serial numbers
The early guns have them–later ones do not. All guns have lot numbers, however, which often mislead owners into believing they have a particularly early gun. The end cap is located under the muzzle and will have the last three digits of either the serial number or the lot number stamped into it. It’s best to get Hiller’s book, as there are some subtle manufacturing cues to identify a gun’s true age.

You can collect and shoot these fine air pistols. Modern replacement parts exist for nearly all problems, unless there’s been severe abuse. If you like well-made precision airguns, you should really look into a Webley Senior. It represents a lifetime investment in fine airgunning!

Look for part 2 in a few days.