I made the picture big, so you can really see it. Crosman’s 114 is what little boy’s dreams are made of.

Back to the 114 today. As I mentioned last time, this is a bulk-fill CO2 rifle. What that means is that it doesn’t use any kind of disposable CO2 cartridge, as many CO2 guns do. Instead, a separate tank of CO2 liquid and gas is connected to the rifle, and CO2 is introduced from that tank. So, a short refresher on how CO2 works is now in order.

To fill the rifle, a separate CO2 tank is used. Every rifle was initially sold with a tank, plus spares were also sold. This tank holds about 10 oz. of liquid CO2, so it is called a 10-ounce tank.

How CO2 works
Carbon dioxide is a strange gas. At room temperature when liquid carbon dioxide (or solid carbon dioxide–which is also called dry ice) is confined in a pressure vessel like an airgun reservoir or a separate tank, it will evaporate until it reaches a pressure around 900 psi. Actually, at 70 deg. F. it attains the pressure of 853 psi when confined. At that point, no more gas will evaporate and the pressure will stay constant, as long as the temperature doesn’t fluctuate. The remaining liquid or solid will stay as it is, with the solid turning to liquid at this temperature.

You can learn two things from this. First, CO2 regulates its own pressure. Nobody compresses it, in the traditional sense of the word. At least airgunners don’t. They rely on that high-vapor pressure to operate their guns. While the pressure is limited, it’s also self-sustaining, so it’s possible to get a lot of shots at a very consistent velocity–except in cold weather.

When the temperature is below about 50-60 deg. F., CO2 will chill the gun as it fires, causing the gas pressure to drop. It’s a warm-weather gas. Knowing that, you will be able to use it without many problems. As long as there’s some liquid remaining, the gas will maintain the same pressure. Once the last of the liquid is gone, the pressure of the gas drops straight off and the shots quickly become slow and unusable.

Now, apply the knowledge
CO2 liquid maintains pressure by evaporation to gas. CO2 gas does not maintain pressure and drops pressure rapidly. Knowing that, you understand that you want to have liquid CO2 in your gun. How much you have determines how many shots you can get at a sustained velocity. So, bulk-fill guns are designed to introduce liquid CO2 into the gun during a fill. With the 114, it’s very easy to do.

First, unscrew the protective cap at the end of the reservoir. If you have a gun that doesn’t have a cap, do something to protect this area, because any dirt that gets into the fill port can be blown into the gun during a fill. Many CO2 guns have a fine mesh screen to catch dirt particles, but don’t rely on that. Make sure no dirt is present to begin with. 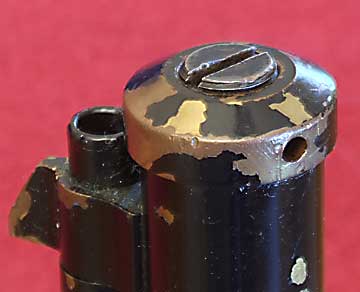 The end cap is a screw that protects the fill port from dirt. Remove it to attach the CO2 tank.

Next, screw the separate CO2 tank to the gun. Now, hold the gun so it’s pointing straight up and the tank is pointing straight down. That lets the liquid CO2 gather in what is now the bottom of the tank (it’s being held upside-down), where it will be blown into the airgun. Hold onto the wheel on the tank and rotate the tank body so the valve will open. You will both hear and feel the liquid CO2 flow into the gun (the gun’s reservoir gets noticeably colder). The gas and liquid will stop flowing when equilibrium is reached, so you don’t have to do anything special. Today, some guns require the owner to weigh the reservoir before and after the fill to ensure that too much liquid did not get into the reservoir. The older Crosman guns didn’t have such a requirement. Under normal conditions (room temperature or higher), it’s nearly impossible to overfill the gun. 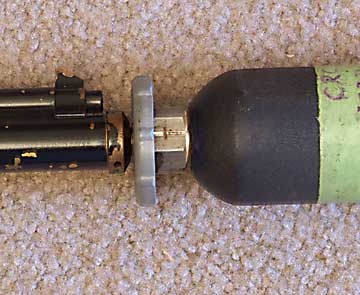 The tank is screwed to the end of the gun for filling.

Once the gun is filled–it only takes a few seconds–close the tank’s valve and unscrew the tank from the gun. If you got a good fill (the right amount of liquid), your gun will shoot for many shots before velocity drops off. This is the point at which the 114 starts to resemble a PCP. In fact, in a curious twist of irony, Crosman designed the Benjamin Discovery to use either CO2 or high-pressure air. Many confirmed CO2 shooters who had sworn they would never go over to “the dark side” and use air have discovered (pun intended) that filling with air to 2,000 psi isn’t much different than filling with CO2. You just get fewer shots and much higher velocity. They became reluctant converts to air power!

The modern way to full
If you don’t have a 10-oz. tank or you don’t want to invest in a 20-lb. tank to fill it when it gets empty, you can buy an adapter to fill these guns from paintball tanks that are easy to get filled at paintball shops. The adapters are available from those companies specializing in CO2 guns.

So, now we have a good idea of what a 114 is and how to fill it. Next time, we’ll look at the rifle’s performance.