The first report on the Blue Wonder cold bluing system sparked a nice discussion of cold blues in general. It was fun to read all the accounts of experiments with various cold bluing solutions. And, at the end of that report I promised you that I would return with more examples of what Blue Wonder can do. Today, we’ll see what else I was able to do with this stuff.

I tried to make the point in the first report that I’m not a good craftsman. I rush jobs, and I sometimes don’t follow all the directions to the letter. In the case of Blue Wonder, I did try to make an exception, but some of you felt I shouldn’t have used acetone as a degreaser before applying the blue. Still, I did it and the results stand.

Two different projects–let’s start with the first one
For today’s report I have two very different bluing projects. The first is a spot-blue job on an old rifle that is otherwise 98 percent blued. I own a nice little Remington Model 24 semiauto that I bought for $175 in a local gun store. The gun had been stored in a place where it was in contact with something hygroscopic that wicked moisture out of the air. According to the gun store salesman, the former owner had stored the rifle in a gun safe, so I will assume the safe has notched holders that are lined with open-celled foam. It’s a common story.

The barrel had rusted more than a little where it touched the foam. The former owner had removed all the rust, but the bluing went with it. The barrel has two large, unsightly areas of shiny metal surrounded by good, even bluing. The job is to cover those spots and bring them to the same deep blue as the area around them. 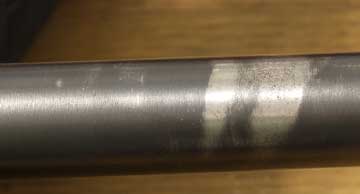 When the rust was removed from the barrel of this Remington model 24, the blue came with it. 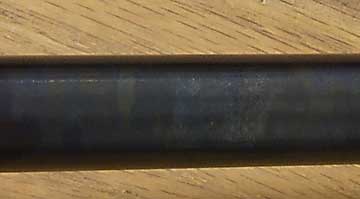 The fix covered the shiny spots, but doesn’t blend into the rest of the rifle yet. Area coverage doesn’t work for spot jobs.

Oops!
For this job, I tried something that I don’t recommend. On the BB gun job I did in Part 1, it appeared that the blue blended in with the blue that was already on the gun so you can’t tell where I worked. I had hoped that would also happen on this rifle, so I spread the blue solution much farther than just on the bright spots. That turned out to be a mistake, because the Blue Wonder mixed with the blue on the gun and darkened it. I would recommend using a cotton swab for a job like this and try to stay inside the spot.

To fix the job that now looks better than before but not yet good, I can try to blend the area in with the rest of the gun by carefully applying more solution at the edges of the patched part. Or I can try to remove the Blue Wonder with 0000 steel wool and start over. Or I suppose I could just darken the whole rifle to a much deeper shade. The value will not be affected no matter which course I take because the original two bright spots lowered the value of a $400 rifle to about $175. No amount of careful restoration can change that. But it’s always nice to have a smart-looking rifle, so I’ll try to fix it.

On to job No. 2
The second job is much larger. It involves bluing a brand new rifle barrel. A friend rebarreled an old .22 rimfire of mine with a .17 HM2 bull barrel he bought on eBay. He actually bought three barrels at the same time, and the first rifle he built for himself is a real tackdriver. He has managed a sub-0.20″ group at 50 yards and I have managed a 0.21″ group at the same distance. We both hope the barrel on my rifle will be as accurate.

The new barrel has no finish yet. 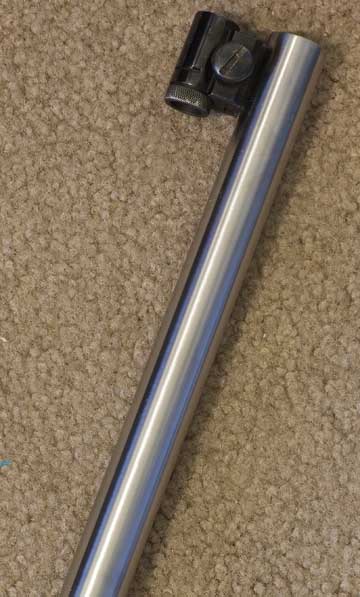 The barrel was polished fairly well when installed. I didn’t have to do a thing. 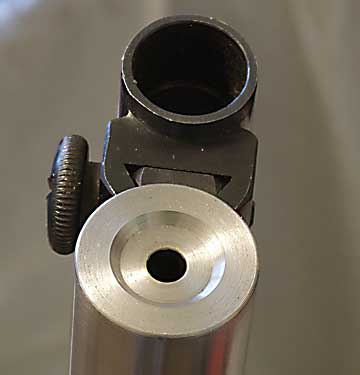 New barrel has a target crown.

Heating the whole barrel was a chore. I’m sure I didn’t get it as hot as it should have been, but it was warm to the touch when I went to work.

Once again, I used acetone to degrease the barrel and once again it seemed to work fine. As the blue went on, the barrel started out very splotchy and uneven. Some parts were still silver while others were getting black. But I kept on applying more and more bluing liquid, always remembering to shake the bottle before each application.

The front sight was a chore to get around, so I brought out the cotton swabs, which worked fine. The liquid really has to be forced into the corners to work evenly.

Have faith in the directions
The instructions say to use between 5 and 15 coats of bluing solution. I’m sure I used at least 15 this time. After the overall finish was dark, the metal started turning dull as the application dried, just like the other cold blues will do. But I had faith in the directions and stuck with it. Finally, I came to the point that no more uneveness could be seen. When that happened, I stopped applying the blue. I let it stand for a minute, then I wiped down the barrel and applied the developer. I let it develop for a full three hours before wiping off the remaining developer.

This job turned out great. It’s not perfect–there are a couple of uneven spots, but I can always come back and apply more blue later. The barrel looks like it has received a professional blue.

It’s difficult to see how deep and even this barrel blue is, but take my word for it–this is the best cold blue job I have ever seen. 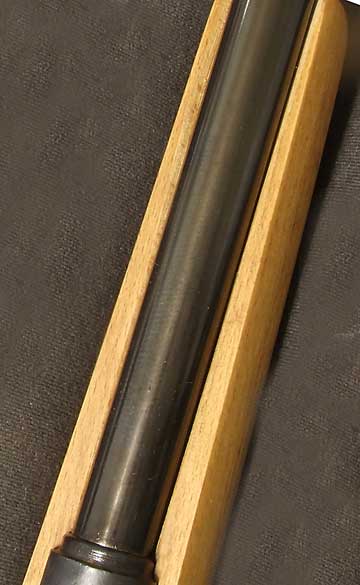 Here’s a closeup, but it’s still difficult to see the depth and eveness of this blue job. 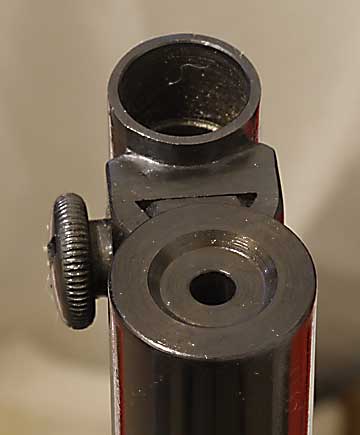 Even the muzzle got blued.

For a product to work this well in my hands, it must be as dummy-proof as it can be. I don’t know how well it will hold up, but Blue Wonder is the best cold bluing system to apply that I have ever seen or used. I may report on it again, as I have a couple other dogs that could stand a refinish. 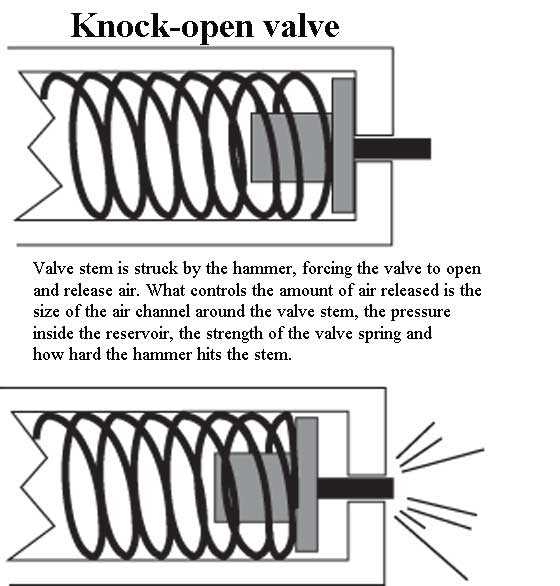