Home > Blog > Education / Training > Something from nothing – Part 3

Something from nothing – Part 3

Before we begin today’s report, I have an announcement. Actually, I’m announcing that on Friday there will be a special announcement about the rifle I have alluded to several times. Crosman is making an upgraded version of the Benjamin Discovery. It’s highly exclusive and designed for Pyramyd Air. They’ll be selling and distributing the rifle, too. I’ve seen it at Pyramyd Air, but I haven’t tested it yet. On Friday, you’ll be given the details about this new PCP. They should be in stock very soon, and I’m scheduled to get one as soon as it becomes available. I’ll rush it into testing for you.

On Friday, everything will be clear.

Today’s report started as something simple I could write while on the road, but it has evolved into something much greater. Writing it and thinking about what I’m saying has reminded me of things I had almost forgotten about dealing in guns. And last Saturday that knowledge came in extremely handy when I was in a favorite local gun store. By telling you the story, I can illustrate how research helps you as a collector.

The dealer doesn’t know what he has
So, I’m in the store looking at the used long guns in a glass case when I spotted a Savage over-under rifle/shotgun combo gun. It’s model 24, and the gun I’m referring to specifically is the model 24B-DL. It was listed on the tag as .22 LR over 20 gauge and was selling for $200.

This Savage was found in a gun store last Saturday. 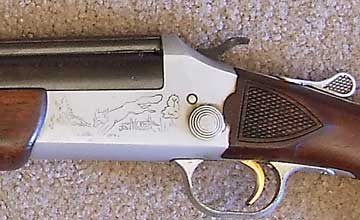 The Savage 24B-DL is the deluxe version of the combo. It has upgraded features.

I’ve long wanted a Savage model 24, but at the gun shows they seem to ask $425 for good used ones. I have that much, but it just seems high to me. They come in many rifle calibers, and the shotguns are either .410, 20 gauge or 12 gauge. The most popular two calibers found in the model 24 are .22 long rifle over .410. From perusing Gunbroker.com, I know that Savage 24s most often sell for $375 to $425. Some of the rifle calibers, such as .357 Magnum, are considered extremely desirable and command much more money, but I thought that a .22 Magnum over a 20 gauge shotgun would be ideal for me.

Wrong caliber!
Well, they pulled this one out of the glass case, and, lo and behold, it was mislabeled! It was a .22 Magnum over 20 gauge–exactly what I wanted. And it was the deluxe model with checkered walnut stock and forearm and a nickelplated, engraved receiver! The barrels were coated with rust and grime but seemed to have pretty good bluing underneath. I knew steel wool and Ballistol would clean it right up, which they did.

Long story short, I bought that combo gun fast, because at $200 I reckoned it was undervalued by about half. Nothing I have discovered since then causes me to change that assessment.

Why was it so cheap? The rust, for starters. Many buyers could not look past it to see a great gun. Also, some former owner had attached an aftermarket recoil pad and his work looks about as good as mine, which is to say something from the early hobo movement. While not quite as primitive as rice-paddy chic, early hobo displays a blatant disregard for style, good work or coloring within the lines. I, however, was armed with the knowledge that I could easily source a replacement buttplate for very little, if I ever felt the need for style closure–which I never will. Again, my research paid off.

Here’s the lesson to take away: If you study the airgun market and know what to look for, you’ll be prepared to jump on a real bargain whenever it presents itself. Yes, you may be looking for a Diana model 27. If, instead, you stumble across a Hy Score model 807, you’ll know that it’s really a 27 and know what it should cost. And if, instead of the Hy Score 807, you encounter a Hy Score model 801, you’ll also know that it’s a superior model because you have read David Enoch’s remarks about them on this blog. I guess the bottom line is this: knowledge is power.

Here’s some more knowledge
This next point is one I have wanted to tell you about for a long time, but other things kept intruding. This may not sound like a big deal, but I have another story to illustrate just how important it is.

The dealer isn’t interested in the same things as you
Dealers sell what they are familiar with and discount what they’re not familiar with. That is the nugget I’m giving to you. What does it mean?

It means that I can go to my CO2 repair center and spot an FWB 124 standing in a rack of used guns with a tag on it for $35. Yes, that really happened to me. Oh, the gun was rusty and missing its sights and it was the standard model–not the deluxe. But still–$35 for what should have been a $200 air rifle AT LEAST! I bought it, took it apart, cleaned it, installed a Maccari seal and mainspring and a cheap scope and sold it for $250. I did so because I knew what I was doing. Of course, I had to find the rifle to begin with; and if you live in Port Radium, Canada, (or Hilo, Hawaii), you might not have the same opportunities as I do. But you’re on the internet, right? Yesterday, I did a special search on Gunbroker.com. Instead of looking for guns by their model names I looked for them by their attributes.

Believe it or not, there are dealers who advertise things not by their model names but by their features. This eliminates from the list of potential buyers everyone who is looking for the item by its common name. Therein lies my second story.

I’ve wanted to buy a Sheridan Knocabout single-shot pistol for a couple of years. The name is not misspelled. Sheridan spelled it that way in the literature and on the gun. I have special alerts on all the popular gun auction sites set up to notify me when one of these guns goes up. And they work. I get notices almost every week of a gun for sale. Unfortunately, so does every other Sheridan collector. These pistols usually sell for over $300, despite existing in great numbers and not being that unique. I don’t want to pay that much, so I always get outbid.

But yesterday I found where a dealer on Gunbroker had listed one as a Knocabout .22 cal. single-shot pistol. I found it by looking at all the single shots. He said in his description, “Not the type of gun I normally sell, so $9.99 start price and $15 shipping.”

Oh, and did I mention that this is a boxed gun with all the paperwork and is in UNFIRED condition? So, it’s worth WAY more than a typical Knocabout, and we now know about what they go for. Here was an opportunity to buy something and make a little money.

Now, the last thing I do on auction sites is announce my presence. I don’t want the other bidders to get their panties in a knot and get into a bidding war with them over who is the most macho. I don’t bid until the last possible moment. On Gunbroker, they have a thing called the “15-minute rule” that says if a bid is received within 15 minutes of the end of the auction, the bidding time is extended by 15 minutes from the time of that bid. My strategy is to figure the most I will pay for an item and bid that much 15 minutes before the end of the general auction. If there’s a crowd of anxious bidders waiting until the end, this strategy doesn’t work very well; but if the item is flying below the radar, as this one seemed to be, there’s a chance I’ll get it.

When I discovered the gun with over a day remaining in the auction, the bid was $155.99. As the bid time expired down to 15 minutes, the bid didn’t change, so I was either watching it alone, or the other bidder was watching silently. I knew the pistol in this condition was worth well beyond $300, so I decided that that would be my cap. If I couldn’t get it for that or less, the other bidder wanted it more than I did. However, my study of human nature has also taught me that internet auction bidders never bid in even amounts, so my top bid would be $309.99

And here’s what happened
I was immediately out-bid by $5. So the other bidder wanted it more than me. His maximum bid was larger than mine and the aution software automatically advanced his next bid past mine. That’s okay, too. There is a saying in the buying business, “You win some and you lose some, but you suit up for them all.”

So, I didn’t get the pistol, but I did get a nice combination gun on Saturday. I’ll continue to look for that Knocabout and dozens of other things that are on my list. And the next time a good buy comes my way, I’ll recognize it.