This test was requested by some of our readers after I made a few remarks in the recent Haenel 310 report. They wanted to see the Haenel 310 pitted against the Daisy Avanti Champion 499 with the human error taken out. So, I got to shoot at 5 meters (16.4 feet) from a rest on a bench. I tell you, it doesn’t get much lazier than that!

Problems, problems!
Would you believe that both guns acted up and refused to shoot? Or at least that’s how it seemed to me. In the end I think I figured it out, but I went through lots of shots getting there.

For starters, I have three types of lead balls for the Haenel but didn’t know which was the best. The copper-coated balls I bought for my other 310 were too tight for the bore of this rifle. I got several jams that took time to clear. That left two types of unplated lead balls, one of which was 100 f.p.s. faster than the other in this gun. In the end, the slower balls proved to be the best.

But try though I might, I couldn’t get the rifle to group off a rest. My “groups” were more like patterns and far larger than the groups I shot offhand in Parts 2 & 3 of the 310 report. That may be hard for you to believe, but that’s what happened. One thing that disconcerted me was the fact that the rifle was shooting to the right. Finally, after about seven groups, I tapped the front sight to the right to correct it (when adjusting open sights, the front sight should always be moved in the direction opposite of where you want the pellet to go), but I went too far. Even though I moved the sight just a couple hundredths of an inch, the groups were now landing to the left of the aim point. I decided that was it–I wasn’t going to chase the zero and conduct this test, or I would never finish it.

However, while doing this I did discover what was apparently causing my guns to misbehave. I had been shooting them alternately, switching from one to the other after every group. I didn’t allow myself to get familiar with either gun. I tend to do that at the firearms range as well–taking five to ten different guns and running through them as fast as my interest wanes, which is pretty quick. But you never get used to one gun that way and I know it, so as soon as I recognized what I was doing, I stopped.

Once I did that and settled on just one type of lead ball, the groups started to come together. I finally got what I think are two representative groups, though they are not any better than what I shot offhand with this same rifle. By the way, the 310 likes a good artillery hold with plenty of follow-through. 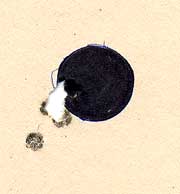 310 group was left of center, but I didn’t bother correcting it. 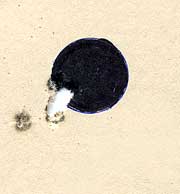 Another almost identical group with the Haenel 310.

Okay, so the 310 can shoot. What about the Daisy 499? At first I was switching it off with the Haenel, as I have told you, so I had to figure that out before I could get the gun to shoot. I also started the test shooting regular Daisy zinc-plated BBs, so the first group had to be thrown out. The 499 is hyper-accurate, but only with the special Avanti Precision Ground Shot made expressly for it. The use of standard BBs will increase the group size for sure.

Once I started grouping, I discovered that the sights on this gun were also off. So, I took a couple groups to sight it in. In that endeavor, I re-learned that the directions molded right on the Daisy 5899 rear aperture sight are on backwards. If you want the BB to strike higher, you dial the sight LOWER and the same with left and right. This confused me for a group or two, but once I figured it out I was back on track.

I also learned that the 499 doesn’t need an artillery hold. I had been using that hold all along, but when I grasped the forearm tightly, the groups shrank right away. Shooting from a bench is therefore not that different from shooting offhand.

By this time, I had invested several hours with this test, so I shot only a single good group, but it’s representative of what a 499 can do. The 499 group is smaller than either of the 310 groups, but not by that much. The reason I’m not giving any measurements for these groups is because they tore through the target paper in such a way that taking measurements is very difficult. You don’t know where the hole ends. 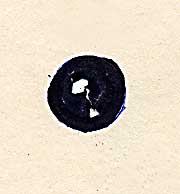 Daisy 499 group was smaller than either group from the Haenel.

Well, this test turned out like I had imagined. The day before, I went to the range and allowed a .44 Magnum to chew chunks of flesh out of my off hand, so using the artillery hold was particularly painful on this day. However, I did follow through after every shot, and I’m sure I couldn’t have shot the 310 any better than I did.

The 499 was a surprise, though. It’s been almost 10 years since I shot it off a rest, and I forgot everything I may have known about shooting it that way. 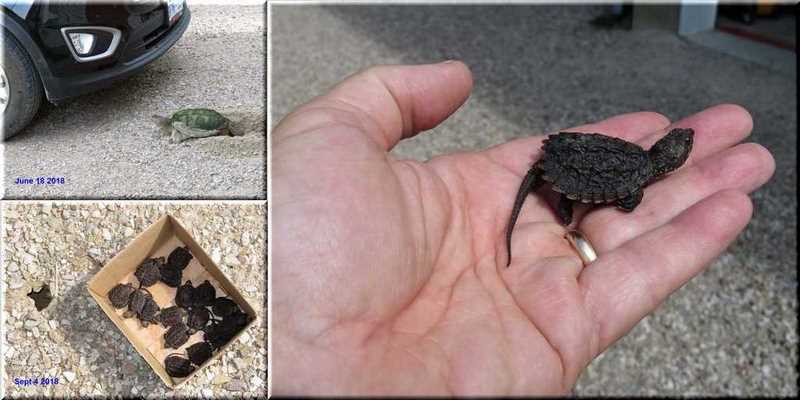 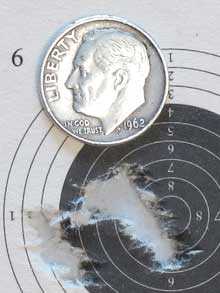