First, an announcement. Pyramyd Air’s 2009 Gift Guide is now online. Besides the usual price-related categories, they’ve added a “Young shooters” category for those who are looking for those types of gifts. Visit the gift guide regularly, as they’ll be adding more products over the holiday season. Now, on to today’s blog.

Benjamin Katana is the latest PCP from East Bloomfield.

The Benjamin Katana is a strange new PCP. Strange because of how it came to be–not because of its design, which is straightforward, for the most part.

Earlier this year when I was at the Crosman plant in East Bloomfield, I was shown a rifle they were working on in the back room. It wasn’t a new technology, in the same way that both the Discovery and the Marauder have new PCP technologies. Instead, the rifle they showed me was a blend of both of those airguns, taking features from each and putting them into one new rifle. Crosman engineers didn’t even have a name for the new gun, but at the time they were leaning toward the Discovery II.

That changed during the summer, and the company approached Pyramyd Air, who is their largest dealer. They wondered if Pyramyd would be interested in a PCP they could call their own–with the Benjamin brand name, of course. They could retail it and also sell it to their dealers. Pyramyd Air owner Josh Ungier was interested and he selected the model name, “Katana,” which is the proper name for a samurai sword.

As word of a new Benjamin PCP slowly leaked out in September and October, some in the airgun community made up their minds what it would be. There was the camp who felt the new rifle would finally break through the price “barrier” and Crosman would be offering the world the first PCP rifle to retail for less than $5. Lord knows, we’re all breaking under the strain of the $259 Discovery that can only be afforded by Daddy Warbucks and his Hollywood cronies! Compare it to fine European guns with target triggers, choked barrels and fine stocks selling for $400. Whoops! There aren’t any.

A second group thought the new gun would have all the features of the Marauder plus those they felt had been erroneously left off the big M. Things like a regulator, 100-shots per fill, 40 foot-pound power level, .25 caliber and probably some others. This crowd was certain the new rifle would be cheaper than the Marauder, which everyone knows can only be afforded by the idle rich.

In truth, the Katana is its own model, but that will be difficult for some to see because they’re overlaying it against the Discovery and the Marauder. I choose to look at it differently.

What if the Disco and the Marauder were not in the world? Then the Katana would be a kick-ass single-shot PCP retailing for $400 instead of $600-800 like its European equivalents. Of course, I haven’t tested it yet, so my remark about its potential for quality still have to be proven, but given that Crosman knows how to rifle barrels as well as Lothar Walther, and given that they already build some remarkable PCPs, I’m believing the Katana will be more of the same with its own special set of features.

Description
The Katana is a single-shot, precharged pneumatic rifle that comes in .22 caliber, only. When the Benjamin Marauder first came out, Crosman conducted a survey of which calibers shooters wanted in a PCP and the .22 was selected by 78 percent of those responding. It would be easy for them to also offer it in .177 down the road, but at present .22 is the caliber.

The styling of the rifle is the European look that most shooters seem to prefer. The wood stock appears to be beech and isn’t as over-the-top as the Marauder stock but is styled along more conservative sporting lines. At the rear is a thick, black rubber recoil pad. The wood is finished a smooth matte that appears similar to an oil finish. The stock comes with sling swivel studs installed. There’s no checkering, but there is a palm swell on both sides of the pistol grip, and the cheekpiece is on both sides of the buttstock, making this rifle very ambidextrous.

One very interesting point Edith made when I handed her the rifle is that it’s very light! The sample I’m reviewing weighs 5 lbs., 12 ozs. without a scope. Of course, there are no open sights, so a scope or other optical sight will be required. The receiver has plenty of room for the scope rings, but two-piece rings will be preferred because of the loading trough.

One reason for the lightness is the inletting of the action and reservoir. There’s a generous clearance on both sides of the metal parts before the stock begins. It’s a look I’ve not seen before.

Lotsa space between the wood and metal.

The triggerguard has received a lot of criticism thus far. The angular shape appears to contrast oddly with the smooth shape of the rest of the rifle. It’s a good place for the aftermarket customizers to begin.

The Katana trigger is borrowed from the Marauder, which means it’s world-class. I will look at it in greater detail in a future report; but for now, know that it’s adjustable to a light, crisp pull.

What pressure?
There’s a pressure gauge built in, of course, and the question everyone, including me, is waiting to hear answered is just what pressure is this rifle set up to take? The answer is 2,000 psi. No, the fill pressure is not adjustable, as it is on the Marauder. That’s not bad at all. The Marauder causes some confusion with newer shooters who still think air pressure relates to the velocity the gun can achieve instead of the number of shots it gets per fill. They know that putting extra gas in a Corvette doesn’t make it go any faster, but when it comes to an airgun they get confused.

Speaking of confusion…
The manual that comes with the rifle needs some work. It talks about filling the rifle to somewhere between 1000 psi and 2000 psi “depending on your desired tune.” The tune has nothing to do with the pressure. The pressure determines the number of shots. As long as the pressure is within limits, it has zero to do with how fast the pellet goes. Those words probably came from the Marauder manual, but someone at Crosman needs to correct them.

The barrel
I pushed several pellets from muzzle to breech, and the 24″ barrel certainly seems to be choked at the muzzle. One shooter became confused by the mention of a choked barrel on a rifle in the Marauder description and argued that if the barrel was really choked then it couldn’t be rifled as the description also states. Well, choked rifle barrels have been around about as long as choked smoothbores. The choke helps bring everything into alignment just before the pellet leaves the muzzle, and it is a proven benefit for accuracy.

The barrel is not shrouded, so the rifle will have a normal discharge sound. That’s probably the biggest difference between the Katana and the Marauder, though doubtless many will feel the repeating function is even greater. Also, the barrel isn’t free-floated. There’s contact at the barrel band and at the muzzle. However, I’ll be testing accuracy, so these features needn’t worry you. We’ll know for sure how accurate this rifle is.

Overall initial impression
I like the Katana. I’m more comfortable with a single-shot than I am with a repeater, so in my eyes, the Katana is ahead of the Marauder. However, the Katana is not shrouded, and I know some people are going to complain about that.

Just hefting it, I like the light weight and slimmer stock profile that feels quick for hunting. The trigger gives you every opportunity for great accuracy. So, instead of seeing the Katana as sandwiched in between the Discovery and the Marauder, I choose to see it as another wonderful PCP from Benjamin at a fraction of the price of any European equivalent. The rest of this report and test should determine if I’m right. 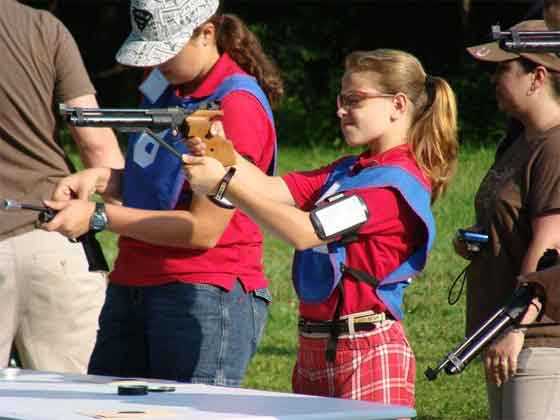