Most of you don’t know this, but I receive many questions and comments on the older blogs. One of them, the one about the Daisy No. 25 pump-action BB gun, is particularly active, and the questions are almost always the same. They want to know which version of the gun they have. So, today I’m going to explain a few of the visual cues that are used to refine the dates of these guns. This will give me a page to which I can refer people in the future. With the comments we’ve had recently about the 25 versus the Red Ryder, I know this will appeal to more than just the hard-core collectors.

Even though this report will not be exhaustive, it will take more than one part to complete. I discovered that as I photographed the first several features and realized what I’d bitten off. Believe me, this will be a lot more informative than counting the grooves on the pump handle, which is about all we knew to do 20 years ago.

When I began collecting 25s, not a lot was known about them, or at least not a lot was written about them. A man by the name John Steed set about documenting 25s and all their characteristics in the mid 1990s, and he published a small booklet of facts so dry they will put most non-collectors to sleep. I base most of what I say on John’s work, but I also know that anything I state with certainty today can be overturned tomorrow. I’m giving you the best data I have, but we’re still learning about Daisys.

Also, you have to bear in mind that Daisy never threw away anything. After they made changes to a design, they would continue to use the old parts until they ran out. And, if a box of old parts was found a year later, there’s a good chance they found their way into the production cycle. So, we must be careful not to invent a new type of variation on the evidence of one gun. John Steed knew that, and I want you to keep it in mind, as well.

Daisy began making the No. 25 pump gun officially in 1914, but production really began in 1913–or at least that’s what my information tells me. The first variation was finished in fragile black nickel over silver nickel. The first gun is sometimes called a 1913 variation, though I just told you that was a year before Daisy officially began production.

The first gun has a couple characteristics that went away very soon after production began. By 1915, all these features had changed into something else. The black nickel went fast, as it was not a rugged finish. They still plated their guns with silver nickel, but a hot bath blue was the preferred finish, staring in 1914. 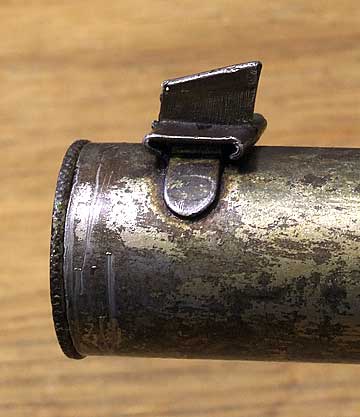 The front sight on this 1913 version of the No. 25 is adjustable from side to side. You can see how it slides, yet the metal is so tight that the blade doesn’t move once it’s in place. It’s a sort of reverse dovetail. This feature went away by 1916. 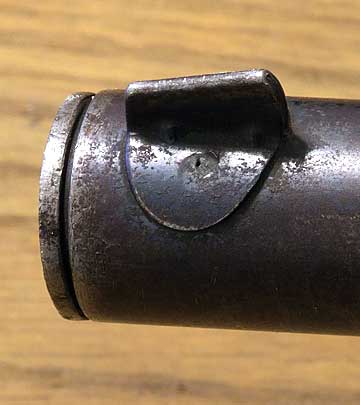 This front sight is on a very early short-throw lever No. 25. It was certainly made by 1927. The sight is spot-welded on the tube, as it would be for the remainder of the production run through 1986.

While the adjustable front sight is a good indicator of an early No. 25, the next feature is even more discriminating. Back in 1914, Daisy was not able to fold the outer tube of any of their BB guns sufficiently airtight so the compression chamber was sealed. They soft-soldered a metal patch to the underside of the gun. The patch runs from the beginning to the end of the compression chamber, including the spring tube that’s always behind the piston. 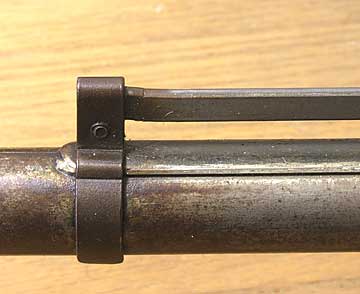 The raised piece of metal under the pump handle guide rod is a soldered patch that denotes an early gun. 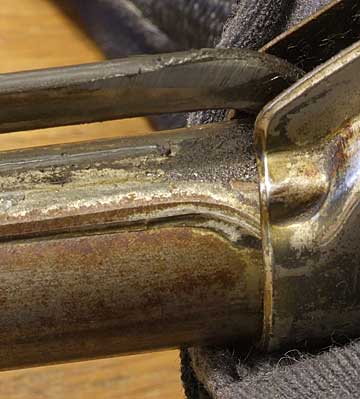 The patch looks like this where the barrel meets the receiver.

In 1915, Daisy perfected the sheetmetal fold, and they dropped the labor-intensive solder patch. Any gun that doesn’t have the patch is a late 1915 or newer gun. If it has the patch, it can’t be any newer than 1915. But the black nickel finish went away in late 1914/early 1915; so together with the patch, the two point to a very early No. 25. 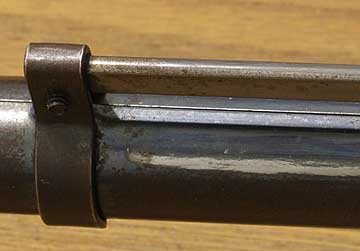 When Daisy learned how to fold metal and retain an airtight seal, the barrel patch was eliminated. This happened in 1915.

Long and short throw levers
In the beginning, the No. 25 pump lever reached out to within about six inches of the muzzle. As I have mentioned in the Red Ryder report, all BB guns of this era had significantly stronger mainsprings than they do today. Some younger kids had difficulty pumping the gun because of this, so in 1927, Daisy introduced what’s called the long-throw lever. The pump handle reaches out to within four inches of the muzzle, supposedly giving more leverage for cocking. I can’t feel a difference, but I’m an adult and my guns are all well broken-in by now. However, the length of the lever throw helps to date the gun.

This is the short-throw lever, made in 1927 and before.

This is the long-throw lever, made in 1927 and after. Notice that there are still five grooves on the pump handle.

Reinforcing rib
I told you this was going to be detailed. John Steed actually discovered this feature, to the best of my knowledge. The earliest guns did not have a reinforcing rib on the pump linkage, but in 1915 it was added. This feature, coupled with the solder patch and the black nickel finish, is one more proof of a real first variation No. 25. 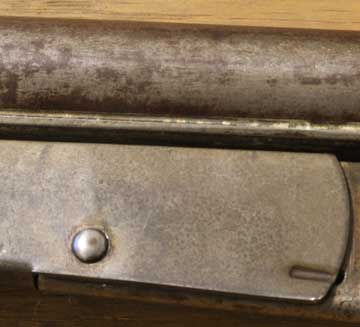 The earliest pumps did not have a reinforcing rib punched into the sheetmetal pump linkage. 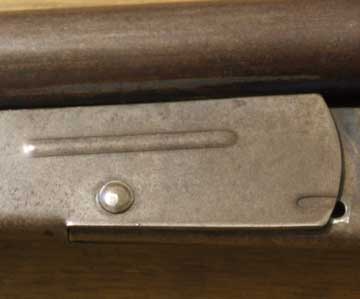 The reinforcement is obvious on the guns that have it. Guns without it were made in 1915 and earlier.

Wow, what a load of stuff. There’s more, too, so stay tuned for Part 2.