Starting today, I’ll be in Las Vegas for the SHOT Show. I’ll be returning Sunday night, so I’d appreciate any help you can give in answering blog questions. Edith will be monitoring the blog, too.

The Air Venturi Bronco is a report I’ve been waiting to do for over 10 months. The new rifle is my own creation, and the execution by Mendoza has been fabulous. I got just what I asked for. I want to take a little time to tell you what I was going for, because it impacts this new model so much.

A year ago, I was musing about the Beeman R7. Anyone who’s into airgunning probably knows that the R7 is a highly stylized version of the Weihrauch HW 30S. It has the famous Rekord trigger and all the ease of cocking and soft firing behavior of the Weihrauch rifle, but it’s stocked in wood that Robert Beeman designed. It was important enough to become one of his famous R-series rifles, which are the guns that made the Beeman name world famous.

The one drawback of an R7 is the price. It’s just too high for everyone to afford. I don’t mean that as a criticism, either. Nice things cost money, and, in this case, the rifle is a very nice thing.

I wondered what could be done. Could an R7 be taken to China with any hope of returning in the same condition? No, I don’t think so. No slight to the Chinese, but their manufacturing processes are different enough that when they copied the Rekord trigger for other models–such as the B20 and B26–they didn’t get it quite right. So, no hope for a Chinese R7.

As for the Turks–are you kidding? They would want to put a 500-pound spring in it to get the pellet to come out at 1,300 f.p.s. They could do the wood, but forget the Rekord trigger. It just wouldn’t work.

Okay, so the R7 cannot be duplicated for a reasonable price. That started me thinking of other classic airguns and of course the one I settled on was the Diana model 27. That was an inexpensive rifle for its day, and even for today it still would be. The ball bearing trigger couldn’t be duplicated today, but why would it have to be? There are so many good triggers around that something else could be substituted.

That started me thinking about triggers. Who makes the best triggers for inexpensive spring air rifles? Well, we can probably argue that question for days, but one name has got to be on the short list — Mendoza. Their quirky two-bladed trigger is one of the lightest, crispest airgun triggers around. There’s only one problem with that reasoning. Mendoza already makes a bunch of fine models, so why would anyone want them to make anything else? 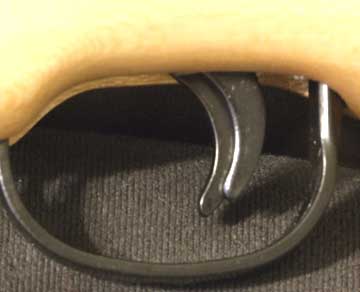 I had an answer for that. The one rifle they don’t make–at least the one we don’t see much here in the U.S.–is a low-powered all-day plinker. Their RM-200 comes as close as they get, but it’s still too powerful to fill my special need. It’s no Diana 27. Yes, I’m aware of the RM-10 that some dealers carry. It’s a great gun with a lousy stock, in my opinion.

Then, serendipity struck hard. Somehow I became aware that Mendoza had sent a youth model breakbarrel to Pyramyd Air for evaluation about a half year before. In fact, I had been asked what I thought of the gun. Well, I’ll tell you what I thought. The stock had a big kidney-shaped cutout through the butt. I thought the Mexicans had lost their minds! It looked like Cindy Lou Who had been turned loose in their stock design studio.

That goofy-looking gun was based on the RM-10 and was called the Bronco, strangely enough. When I heard the name, my mind started thinking “Western.”

Bronco is exclusive to Air Venturi.

I had recommended a “No Buy” to Pyramyd Air for the Bronco. Now, many months later, when I was looking for a nice youth model, someone at Pyramyd Air said to me, “What about the Bronco?” After playing 20 questions and seeing the gun for the second time, I had another flash of insight. It went like this:

I had the Bronco shipped to me and it was indeed close to what I wanted. It was a .22, but that was easy to fix. I found a stockmaker and sent him a photo of my C1, along with a list of stock specifications. What came back three months later wasn’t just encouraging, it was spot-on, or so I thought at the time.

Beeman C1 was a neat little carbine with a unique western look.

The plot thickens
At this point in the project, a couple people from Pyramyd Air joined me in the design, and it’s a good thing they did. They steered me toward more youth-sized dimentions. My original Bronco stock had a pull of 15 inches! I thank Pyramyd Air Sales Director Paul Milkovich for the 12.75-inch pull we now have. It’s a trifle short for an adult, but it feels great. It makes the rifle feel like the carbine that it really is. And kids down to 12 are going to be able to hold it. Edith, who is often a big critic of air rifle stocks, found the Bronco stock fit her just right. A Goldilocks stock!

But the stock is white!
Yes I know the stock is blonde. I asked for that specifically. After all, half of our spring rifle wood stocks right now have reddish-colored wood and the other half are dark brown. It’s time for a change. And the light color contrasts so well with Mendoza’s deep black metal finish. It’s a striking-looking air rifle.

I also asked for a rubber buttpad rather than a thick recoil pad. Mendoza supplied a beautiful black pad that matches the look of the rifle perfectly.

Another Pyramyd Air employee joined Paul in reminding me about the over-oiling problem many Mendozas have. Here was a chance to do away with that dastardly oil hole on the left side of the spring tube. If the gun needs oil, and they seldom ever do, then put a drop down the transfer port hole, the same as every other spring rifle on the market.

Then, the subject of sights arose. Paul and I are of one mind in disliking fiberoptics, so Mendoza accommodated us with a plain front post and a fully adjustable rear notch. Shades of the Diana 27! Finally, a basic spring rifle that can be sighted with some precision. Yes, there’s an 11mm dovetail that accepts a scope; and, yes, there’s also a scope stop hole, even though this is one rifle whose slight recoil probably won’t require one. But it’s there for you.

Rear sight adjusts in both directions.

There’s the wonderful two-stage Mendoza trigger that looks and acts so much like the Savage Accu- Trigger. Though it isn’t adjustable, it’s so light and crisp that I doubt many owners will mind.

There’s an anti-beartrap device installed; if you cock the rifle, you’ll have to load and fire it. It cannot be uncocked manually. The safety is automatic, but it’s ambidextrous and pushes off quickly with the thumb of your firing hand.

Speaking of ambidextrous qualities, the whole gun is 100 percent ambidextrous! I draw your attention to the high straight comb. No need for a Monte Carlo butt profile here. The straight line of the comb lifts your eye high enough to use a scope if you like. And no cheekpiece to spoil the Western lines. The C1 stock lives again!

This is really a carbine-length air rifle. Overall, it measures 39.5 inches. The barrel is 9 inches long, but the muzzlebrake, attached to a deep counterbore on the front of the barrel adds another 7.5 inches, so the overall length appears to be 16.5 inches. The weight is right at 6.5 lbs.

Notice the muzzlebrake. It’s twice the length of any other Mendoza brake. I asked for that to give you a good handhold when cocking the gun.

I’m excited about the new Bronco. It’s the all-day plinking air rifle I envisioned at the beginning of the project. But before I end today’s report, a final word about this “development.” I think it should be obvious to everyone that we did not start with a clean sheet of paper. We (I) started with a Mendoza RM-10. You can buy one of those right now, though the pull of the stock is way too short and it lacks all the features and design elements I have just shown you. But if you want one, they’re available.

I started with a developed gun because, let’s face it, it’s the easiest, fastest thing to do–not to mention the least expensive and least risky. The only real risk is that everyone will not like the Western stock or the blonde wood finish or the plain sights I selected. I think there will be people who don’t go for those features–either one of them or all of them. But I’m gambling that there will be thousands of airgunners who have been waiting for a small, lightweight spring rifle that’s easy to cock, accurate and feels right in the hands. A modern rendition of the Diana model 27, if you will. Not a copy, but a gun that captures the essence of what the 27 is.

And just to put this new gun into context, it isn’t a stripper-class Chinese bare-bones springer with lots of plastic. This is a fully developed air rifle with features carefully thought out. The barrel has a Mendoza pedigree, so it should be very accurate. The trigger is smooth and light right out of the box. There should be no need to take this one apart and smooth it up and relubricate it to make it something good to shoot. It comes that way. So, if the price seems on the high side, just remember that it’s on the high side of low. This is a thoroughbred, built as a shooter. An heirloom gun.

I also believe there will be thousands of shooters who don’t know Air Venturi from a can of Shinola, but who will like the idea of a Western-looking air rifle for their boy, rather than a harsh, buzzing 1,000 f.p.s. plastic clone. For them, and for you, I have a surprise. You see, this isn’t the only airgun I’ve been developing. Later this year, there will be a second rifle, the “father” rifle in this father-son combo. Now, that’s something we can all look forward to.