A rare BB gun from Wyoming!

Over the years I have written about many strange airguns. Some of them were mine and others were guns I either borrowed to test or just wrote about.

Sometimes, I’ve even written about firearms, which a student of airguns should understand because of the insight firearms shed on our hobby. Microgroove rifling, for instance, came from a 19th century barrelmaker named Harry Pope. Then, the Marlin company copied it; and only after airguns began being rifled in about 1906 was microgroove rifling finally applied to them.

And, there have been a fair number of curious guns that don’t really fit exactly in one category. For example, the Kruger cap-firing BB pistol isn’t really an airgun, but a firearm by the definition that a firearm discharges one or more projectiles by the force of a chemical explosion. But no BATF&E agent would ever give one a second look. Made mostly of black styrene, the Kruger is a toy by anyone’s definition. You can read about it in this report.

Well, today I want to tell you about another odd type of gun that also isn’t an airgun by the strictest definition. But it’s been lumped in with the airguns ever since it was launched in 1923 in Rawlins, Wyoming, by a dentist, Dr. C.L. Bunten. I’m referring to the Bulls Eye Pistol, a catapult gun that operates by the power of rubber bands.

The Bulls Eye Pistol is a repeating ball-shooter that launches .12 caliber lead balls by the force of rubber bands. Yes, I said it’s a repeater! Although, in today’s vernacular, anything that isn’t semiautomatic is a single-shot (not really, but that’s what a lot of non-shooters and kids believe). A repeater is a gun that stores multiple rounds of ammunition that it can fire when loaded by the mechanism. If you have to insert each round into the breech by hand, it isn’t a repeater, regardless of how much ammunition it can carry; but if an onboard mechanism loads each round, you have a repeater.

The Bulls Eye Pistol holds over 50 rounds in a gravity-fed inline magazine. Once again, don’t get too cocky about gravity feed, because the deadly Gatling gun of the 19th century used it to great effect! And the 18th century Girardoni military rifle of the Austrian army fed 22 .47 caliber balls via gravity, alone. So, gravity-feed is a legitimate feed mechanism. 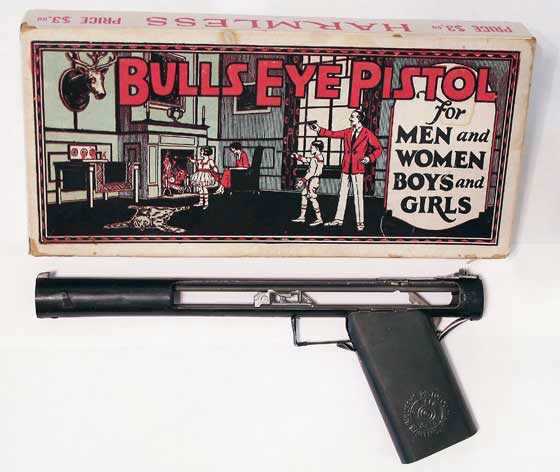 Enough political incorrectness to last a lifetime. Not only is a nuclear family shown enjoying an evening of shooting, they’re shooting in their living room and mom and little sister are downrange from dad and son! And the target is set up on the furniture.

The gun is enormously underpowered, but it has just enough power to get the job done if that means hitting the target. In the literature (yes, I have the owner’s pamphlet that came with the boxed gun), you’re told that you can shoot at windows and not break them, but you can kill a fly at 10 feet.

The Bulls Eye Pistol came in a box with three paper-thin celluloid bird reactive targets. If you ever find a kit I advise you to never shoot at these birds, because the gun can easily poke holes in them at close range. Back in the day when the gun was being made (1925-1940), you could order a package of replacements for next to nothing but they’re irreplaceable today. 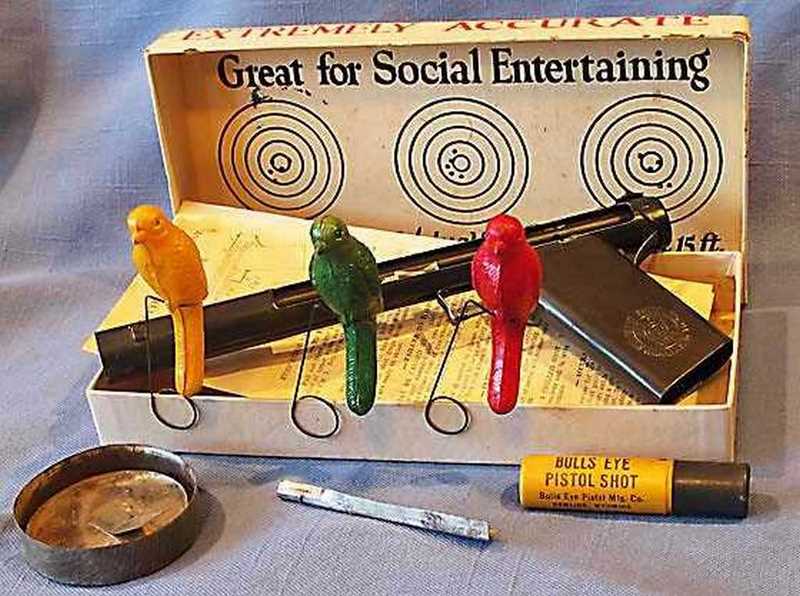 The kit came with the pistol, rubber bands (long since dry-rotted), a tube of shot, ammo loader (silver thing in front of the box), target stamp and pad, 3 celluloid bird reactive targets with stands and a box that served as the target trap.

There was also a bundle of rubber bands inside the box and a small paper tube of No. 6 shotgun shot. Of course, one 12-gauge shell provided hundreds of shots, so I imagine little boys were taking jackknives to daddy’s shotgun shells when he wasn’t looking.

The box served as a safe backstop since the heavy pasteboard could not be penetrated by the shot. And three targets stamped on the inside of the cover provided good targets for the new owner until he found a herd of flies to thin.

Many years ago, Dean Fletcher wrote a test article for Airgun Revue, in which he tested a Bulls Eye for me. When his gun was powered by 4 stout rubber bands, he got a top velocity of 195 f.p.s. with No. 6 shot, which is a .12 caliber lead ball — more or less. But try as he did, he never got his Bulls Eye to group any better than 5 shots inside .75 inches at 10 feet. Some groups were as large as 2.50 inches. He found that follow-through was extremely important with this pistol, which is the artillery hold at work.

There were other rubber band guns that followed the Bulls Eye, with the Sharpshooter being the most noteworthy. It was also produced in Rawlins for a short time, and then production moved around the nation like a geography lesson. When I attended college in San Jose back in the 1960s, I found two Sharpshooters in the box in a hardware store. They were new-old-stock and must have been laying around for close to 20 years.

The way the gun worked was simple. The shooter pulled the launcher straight back against rubber band power. At the next-to-last instant, the shot dropped out of the magazine and into the catapult launcher and then the launcher was caught by the sear. Squeezing the trigger released the sear and let the launcher fly forward, powered by the rubber bands. The launcher had a special seat that contained the shot that was under heavy G-forces until the launcher ran out of track and stopped moving. The shot took off on its own but was guided by the launch seat that had held it in the optimum launch position. 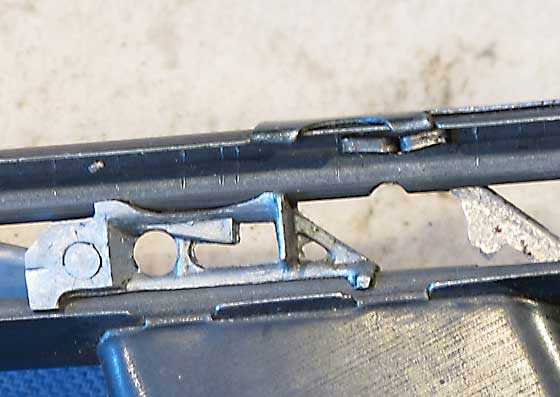 This picture shows everything. The metal launcher is in the center, held in the gun by a top and bottom rail, the hole in the bottom of the magazine dropped the next shot into the launcher when it was in position, and the sear…which moved up when the trigger was pulled.

Dr. Bunten found that No. 6 shot was not perfectly round, and it also varied in diameter by several thousandths of an inch. Running it through a precision barrel was not the way to go. But his launcher eliminated the concerns about any irregularities, so accuracy was possible.

Believe it or not, the front sight on this pistol was even adjustable for elevation and the rear adjusts for windage. I suppose if a fellow had enough time to kill he could regulate his gun quite well until it was possible to pick off flies at 10 feet like the literature said. I do know that lubricating the launch track and even adjusting the tension between the upper and lower guide rails that held the launcher captive was what you did to increase velocity and regulate the direction the shot took. 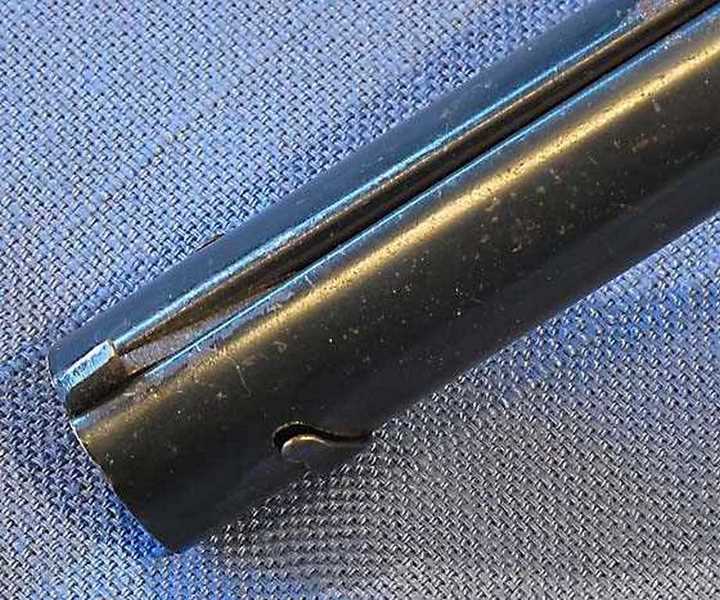 The front sight was removed and 50 round balls were poured into the channel that leads back to the loading hole.

I have a sales receipt from 1942 for a Bulls Eye Pistol for $2.95 plus 20 cents tax. That would be $30-40 today, so this was no cheap toy by any stretch. It wasn’t targeted toward the younger shooter, whose BB guns cost about $1 to $3 at the same time. No, it went after the adult shooter with a few extra coins jingling in his pockets.

Today, a pistol as fine as the one shown here would costs $100-150 at an airgun show. But this is one of those times when anywhere else you might get it for a lot less, because it looks so cheap. I have a small collection of rubber band-powered guns and this one is both the oldest and the star of my collection. It was handmade by Dr. Bunten in the room behind his office in Rawlins, as all Bulls Eye Pistols were. 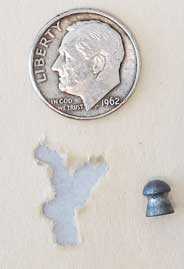 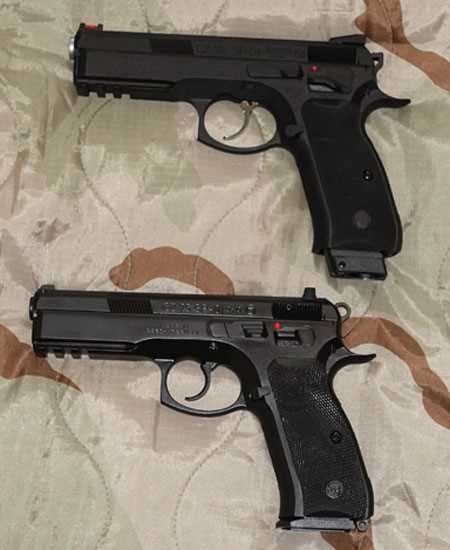