Well, I’m getting to this just in time for Christmas. And to tell the truth, I haven’t had this gun that long. The Marlin Cowboy, imported from China by Crosman, is a lever-action BB gun made with much of the nostalgic past in mind. On the top of the color lithographed box, they point out the metal lever and mention that the gun is made from solid wood and metal — the same battle cry big bore maker Dennis Quackenbush has been espousing for over a decade. Apparently, they have discovered what the U.S. buyer wants. And from the first look, I would have to say they got it right.

The Cowboy is a 700-shot BB repeater. The instructions say to limit the distances to the target to 10 meters or less; of course, I’ll be shooting it at 15 feet, the same as all other BB guns. The Cowboy has been priced right, at less than $40, to compete with its obvious foe, the Daisy Red Ryder. While I don’t like to make comparisons in my reports, it’s impossible to ignore the market this gun is targeting. Everything about it screams “first BB gun” to me. The size, price and features focus on a small person as the shooter.

The gun (it’s not a rifle because it hasn’t got a rifled barrel) is 33.25 inches long. It weighs a scant 2.75 lbs., and has a cocking effort of 20 lbs. Because the cocking lever is short, kids are going to have to learn to use leverage to cock this gun. You aren’t going to hold it on your shoulder and cock it, that’s for sure. The front sight is a very cowboy-looking blade and ramp, and the adjustable rear sight is a plain notch with a stepped elevator slide. Windage is not adjustable. There are no fiberoptics, thank goodness, so the young shooter gets to learn the basics the right way.

There’s a built-in safety, because this is the age of blame over responsibility; but, again, thank goodness, it’s entirely manual. And it’s small enough to be disregarded unless you mean to use it, which I do not recommend. For the benefit of new shooters, safeties are not the safe things they sound like. They simply mean that a gun may be cocked and loaded and “on safe,” which is never a good thing. Better to not cock it at all, and the safety will not be needed. If you do cock it, which loads a BB in preparation for firing, shoot the gun immediately afterwards to return it to the safest condition of all — uncocked.

The wood is stained with a blonde finish, which contrasts with the dark black finish of the metal. The manual says to oil the outer surfaces of the metal parts to prevent rust, so I would assume they’re finished with black oxide and not the electrostatic paint that’s more common these days.

Cocking will seem strange to those with BB gun experience. The cocking lever is connected to a ratchet that catches it by increments as it swings through its arc. Once caught, the lever cannot be returned to the starting position until the gun is completely cocked. You cannot uncock this gun by any method other than shooting.

At first glance, I thought the gun was put together with rivets until I examined the heads on either side of the receiver and discovered them to be Allen screws. Not that I recommend disassembling a BB gun, which is more complex than disassembling most spring-piston pellet rifles; but when the time comes, the Cowboy should be able to be taken apart. 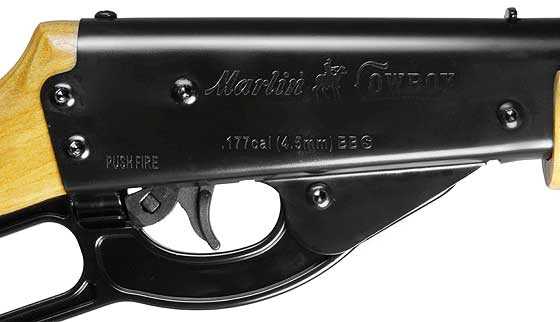 Both sides of the receiver are covered with Allen screw heads. You can see the manual safety button behind the trigger.

Loading is done on the left side of the outer “barrel” that shrouds the real shot tube. A door is pushed up to open access to the BB magazine. You can then pour BBs in until the reservoir fills.

I found an undocumented feature on the gun that piqued my curiosity. It appears to be a window that allows you to see if the gun is loaded. It appears to look directly at the shot seat and shows the BB next in line for firing. I bet it was intended to do that very function and somebody decided at the last minute that it was a liability to have it as such, so they left it there but do not mention it in the manual. Because BBs work via gravity feed in the Cowboy, you’re best-advised to believe that the gun is always loaded, even if the last shot fired no BB. 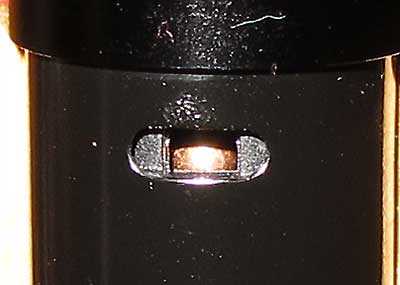 You can see through this window on top of the outer barrel shroud directly into the space above the shot seat. That BB you see is the next one to be fired, but the owner’s manual does not mention this “feature.” You’re well-advised to ignore it in operation of the gun, because the gravity-feed mechanism can always dislodge a BB when you don’t expect it. 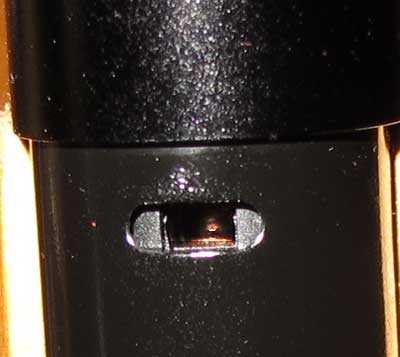 When the gun is cocked, the BB falls down onto the shot seat in preparation for firing.

There’s an oil hole in the outer barrel shroud, and the owner’s manual advises oiling with a drop of Crosman Pellgunoil every 250 shots. I over-oiled the test gun before shooting it the first time, and the excess ran out the rear of the receiver and onto the floor — so, oil sparingly!

Overall, I would rate the Marlin Cowboy as a very nice BB gun. It’s one you can be proud of the whole time you own it. I wish there had been BB guns this nice when I was a kid back in the 1950s!

Many of you have waited patiently for this review, so I’ll hurry it along, knowing that there are holiday decisions waiting in the balance. I expect to complete the report before the end of next week. 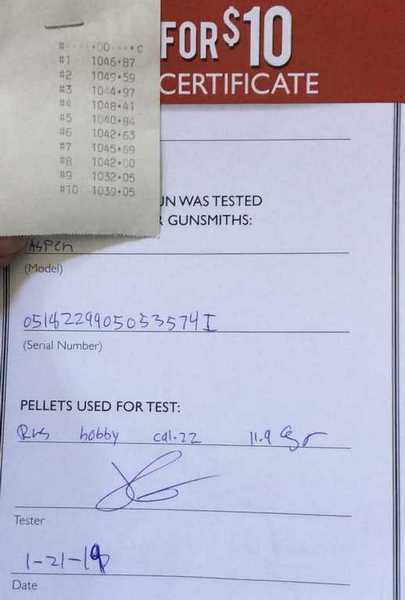