I’m writing today’s report in memory of Edith, because she asked me to. She was fascinated by this little insect zapper, and when it was advertised on television recently she bought two for us. Like everyone, we have occasional houseflies that annoy us whenever we sit still. It’s especially bothersome when we are trying to watch television. For many years I killed them with a rubber band, but that was troublesome and Edith never was able to do it, so I was the designated fly-killer in the house.

Our three cats will watch flies all day long without doing much more. One of them — Dale Evans — a little female calico, even catches them for sport. But it’s a catch-and-release program for her — the number of flies stays pretty constant.

Several years ago we bought one of those electronic tennis racquet-looking things that electrocutes flies on the wire grid of the racquet head. They’re great and they really do work, but Edie got cocky and took on a couple wasps with one. When you whack a wasp inside your house you want to make sure it stays down. Otherwise you’ll be chased around your own home, and that’s never a good thing. So Edie whacked the wasps pretty hard and she broke the handle of the swatter against some furniture. The racket still works — it’s just not much fun to use because the handle is taped together.

Many years ago the Beeman Company started selling a pistol-like fly swatter. When Beeman was sold to the Chinese, the fly swatter went off the market for a time, then Pyramyd Air brought it back under the Air Venturi brand name. 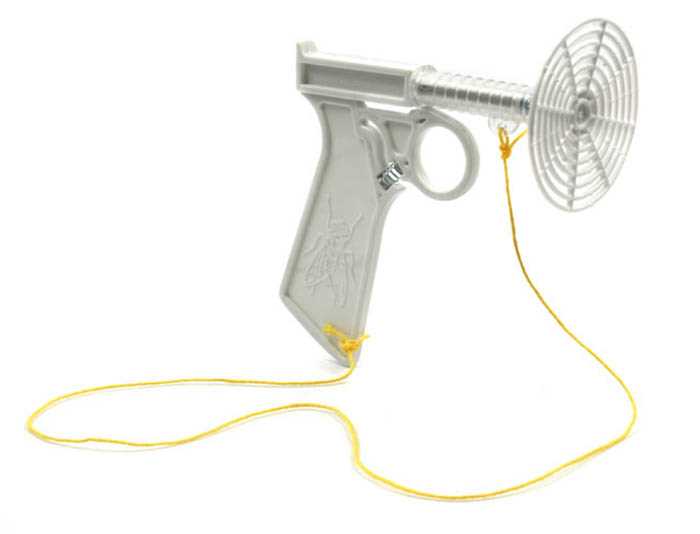 Air Venturi fly swatter gives you the pleasure of shooting the flies with a gun.

I haven’t test that one yet, but I know how it works in principal. The round swatter is propelled from the gun by a spring and kills the flies on impact, just like a normal swatter. It’s tethered to the gun so you can recover it quickly and reload.

But the Bug-A-Salt 2.0 is a real gun! It’s a shotgun whose charge is common table salt. One fill of the reservoir is enough for 80 shots, and a clear cap on the reservoir tells you what’s inside. I can’t tell whether the powerplant is a catapult, where just the power of the spring propels the salt, or if it is a spring-piston, which would be much more powerful. What I do know is it works — and it works at distances I would not have believed before I tested it. 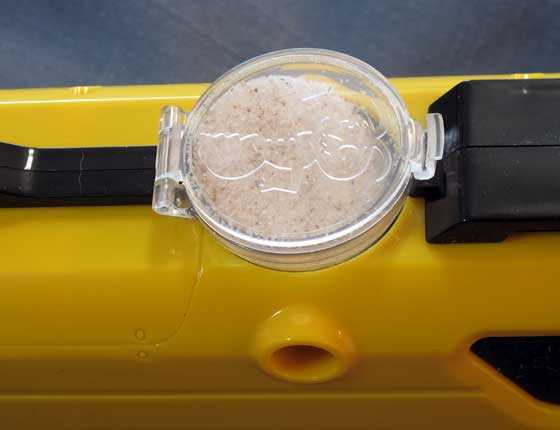 The salt reservoir holds enough for 80 shots. The cover is clear so you always know the status of the charge.

Yes, there was a first model. It was much less powerful than the 2.0, and it held salt for 50 shots.

How the gun works

The Bug-A-Salt 2.0 is entirely plastic on the outside. It has an orange tip to signify it isn’t a firearm, but I got the yellow gun that looks nothing like a firearm. There is now a camo model for those who hunt flies while dressed in a ghillie suit.

Cock the gun by pulling back on the sliding handhold under the forearm. It’s sculpted to fit the hand for an easy grasp. Not much force is required to cock the gun, but every time you do the automatic safety is set. You must then rotate the safety switch forward before the shot can be taken.

The automatic safety is the only feature that bothers me about this gun. It’s ergonomically located to allow access by the shooting hand when holding the gun, but I want to just cock and shoot. If there are many targets, its a hassle to have to keep taking the safety off every time. Maybe that is why there is a You Tube video showing how to disable the mechanism. I’m not going to do that to my gun, though, because — let’s be honest — this isn’t a gun I use that much. I just want it when I need it and I can put up with how the safety is designed. 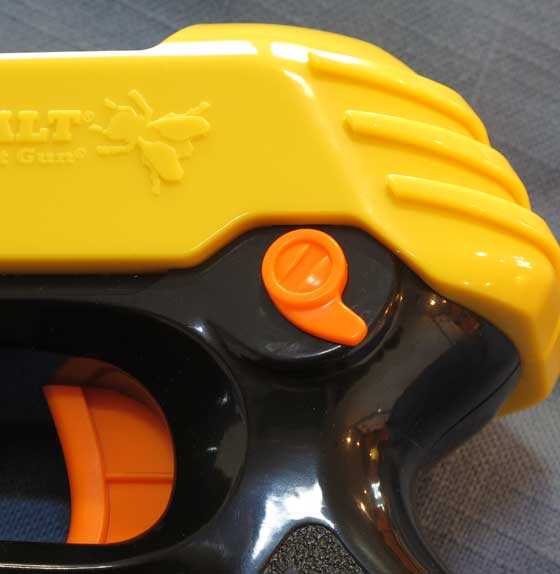 The safety comes on automatically every time the gun is cocked. Push forward to fire.

When I first got it, our house was unnaturally free of insects for a week. Just prior to the package arriving I had killed 2 flies using rubber bands. So the first test was out at my rifle range! We always have a lot of flying bugs out there and I killed 2 common houseflies the first time I used the gun. Both flies disappeared when shot, moving in line with the direction of the salt.

I also discovered at this time that a good substitute for a fly is an empty .22 rimfire cartridge — and there are plenty of them on the ground at a rifle range. They are light enough to move when hit by the salt, so you can learn how to aim your gun without the need for flies.

I should mention that the 2.0 version of the gun does have a front and rear sight. The rear sight only pops up when the gun is cocked. Maybe it will help some people, but I just point and shoot.

Then I finally found a bug in my house. Not a housefly, mind you, but some sort of beetle-looking thing about the same size. I shot it from 2 feet and blew it away — despite the beetle’s outer shell. This was a smaller beetle whose shell wasn’t as hard as some of them get. I wouldn’t shoot this at a Texas water beetle! Those things have been known to scare cats!

Okay, let’s see how this thing shoots. Bug-A-Salt recommends using household tinfoil as a medium for patterning. And they recommend using ordinary table salt. They don’t specify whether it needs to be iodized, but mine wasn’t.

I shot the tinfoil from 30 inches back and got a larger pattern than the Bug-A-Salt literature says — about 3 inches, rather than the 2-1/4 inches shown in the literature than comes inside the box. The difference might just be in where the pattern is declared to start and stop. The pattern is so dense that nothing inside would have been missed by the salt crystals. I then backed up to 36 inches and shot a second time. This pattern was larger by nearly an inch, but the inner pattern was still dense enough to hit any fly. I think I would get as close as I could, but from what I’ve seen I would not hesitate to shoot from 30 inches. That is so much better than the 1-2 inches I have to be from the fly when using a rubber band! 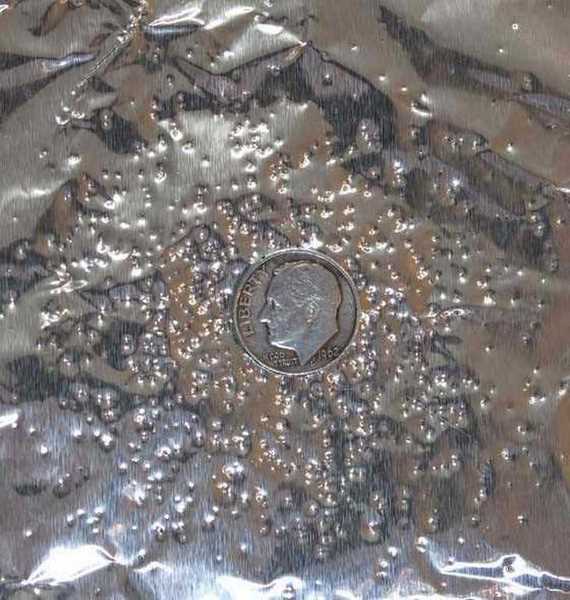 This is the pattern for table salt at 30 inches. The pattern is round, with evenly dispersed salt crystals.

The pattern at all the useful distances is both round and the salt crystals are evenly distributed throughout.

The internet is loaded with chatter about the best projectiles to use in this gun. Besides table salt, poppy seeds are recommended in many places. John McCaslin, the owner of AirForce Airguns, told me he has found kosher salt to work better than straight table salt. That’s because the salt crystals are larger. I haven’t tried that yet, but it makes sense. Maybe you should think of table salt as number 6 birdshot and kosher salt as buckshot.

One thing you do need to know is this gun is very safe to use, as long as you respect it. Yes, there will be salt on the floor after each shot, but I have shot mine in the house for this report and have yet to see any granules lying about. Maybe that’s a blessing granted by my advancing years? Anyhow, I vacuum and dust often enough to take care of it. It isn’t like I shoot a fly every day.

The fly will not be splattered. It stays whole, but dead. You will be able to find it after the shot, but expect it to move several feet from the impact.

Here is where it starts getting dicey. I would use this gun on insects that are known to have softer bodies, with the common house fly at the top of the list. However, as the insect becomes more armored, I would consider carefully whether this is the best method. Yes, the wings of a wasp are probably damaged by the blast, but I would be more careful about an insect that can fight back. Spiders, on the other hand, usually have softer bodies and I would take my chances. However, since some of them are venomous, I would not recommend picking one up until it has been thoroughly squashed.

Almost everyone who sees a Bug-A-Salt for the first time wonders if it is suited for arial targets. I would have to say no. Flies usually move so fast that they are hard to see in flight when they get close enough to shoot, plus this gun is as far from a natural pointing shotgun as it is possible to get. It doesn’t cost anything to try, though. Decide for yourself.

Not at Pyramyd Air

I know you are wondering whether Pyramyd Air will carry this gun. I would advise them not to, because the gun is widely sold through discount channels that have destroyed any potential for making a profit. That’s something Pyramyd Air must consider for every item they stock. They might sell a couple thousand salt guns in a year’s time, but the profit margin is so low that it would actually drain their cash to handle it. If you aren’t into retail operations this statement might sound absurd, but not everything that sells is good for a company.

That’s my review of the Bug-A-Salt 2.0. We bought 2, which I consider to be a lifetime supply. Yes it will wear with use and yes, there are some parts available, but let’s face it — this is not an heirloom airgun. What is is, though, is one of the cleverest ways I’ve seen for dealing with the common housefly.