Yes, I know today is April 1 and I am supposed to write a special April Fool’s blog for you. Well, let’s wait on that because I have a special announcement of tremendous importance. I received a phone call from Ed Schultz of Crosman last night and he told me their steam gun is perfected! He is sending me the first production rifle (they will be produced in New York) to test for you and he says I should have it in two weeks.

I have known about this one for perhaps half a year, but I promised not to say anything. Ed started work on this rifle the day he was hired by Crosman the second time. I reckon he was working on it before that but his non-compete agreement with Sig probably makes him only admit that he started when he got back to Crosman.

What is a steam gun?

Steam guns existed before the start of the 20th century. They were created to launch dynamite projectiles with less impact, to lower the risk of their exploding in the breech. The dynamite cruiser Vesuvius used steam cannons to launch heavy projectiles up to a mile with some accuracy. Steam power isn’t as sudden as black powder and can even be less violent than smokeless powder, so it is ideal for this. 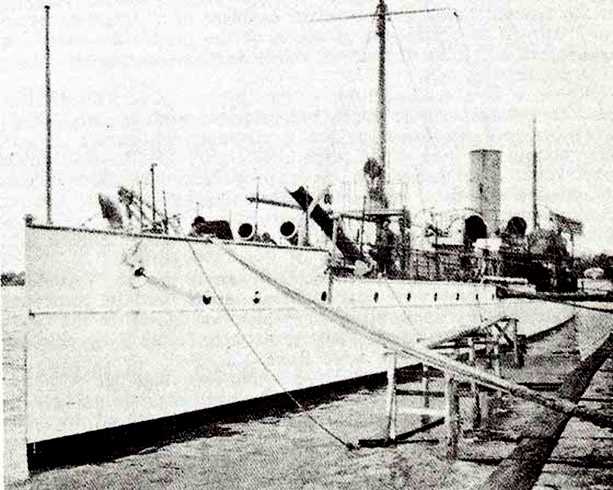 U.S.S. Vesuvius with two guns down and one elevated. From Gas, Air and Spring Guns of the World.

Ed built a prototype .25 caliber steam gun and drove a 27.8-grain Benjamin dome to 1,796 f.p.s. Then he drilled out the back of the pellet head to get a little more water inside and got it up to 2,195 f.p.s. This wasn’t a complete gun — it was just a testbed. But it proved to him that the concept worked.

Ed was messing around with a handheld stun device when it started raining. As drops of water entered the spark of the device, they flashed to steam instantly with a loud pop. He knew what that meant and started work on his gun.

He chose a .30-caliber big bore for his experiments because the size of the bore allowed easier access to things. As it turned out, that became the prototype gun. He got 100-grain projectiles up over 1,700 f.p.s. within three weeks of starting the project.

Then he took a $300 barrel blank from Lothar Walther and attached it to his prototype. He then shot groups at 25, 50 and 100 yards. The barrel was just a blank so it acted like a bull barrel, and he was putting five .30-caliber bullets into a 3/4-inch group at 100 yards. That was when he invited the executives at Crosman to watch him shoot the rifle. Naturally he had to let them try it, too. The prototype is very rough and weighs 11 pounds, but Ed says he saw a 6-pound big bore inside.

The bullets (these are NOT pellets) are long with a deep hollow base. You put water into the base of the bullet and then press in a wax plug that has two stiff electrical wires passing through it. If you press in the plug until it is flat the excess water is forced out, making the amount the same every time and making you a reloader!

When you load the bullet into the breech it stops at the rifling and the bolt presses slightly forward, making the electrical wires contact two copper rings on the bolt face.

When the trigger fires a spark arcs at the end of the wax plug inside the bullet and the water flashes to gas. The steam that is instantly created propels the bullet.

Since water flashing to steam is not a true chemical reaction, Crosman’s attorneys have determined that the rifle is not a firearm and can therefore be sold by non-ffl dealers to anyone who can legally own a pellet rifle. This gives real centerfire capability to the airgun community!

The executives were amazed by the prototype and gave Ed immediate development time and resources to continue, plus they paid his costs to that point. They started the marketing team on a name for the new rifle. So far the two front-runners are H2OMuch and Darth Vapor, with the latter in a slight lead.

Ed took the time they gave him and built a second prototype rifle with all of the improvements gathered from testing the first one. This rifle weighed 7 pounds with a full wood stock and got the same velocities as the first, plus, with a barrel rifled in-house by Crosman, it was even slightly more accurate. The execs were even more pleased and pledged the money for a synthetic stock made from military-grade material — no hollow plastic stock here! They were able to print a prototype for Ed to test while the molds were being made. That alone trimmed off 7 ounces of weight and made the rifle virtually indestructible. All that took place in January of this year.

Last night Ed told me that his design has advanced to the pre-production stage. The new synthetic stock is now available and on the pre-production rifle. Ed tells me this rifle weighs 6 pounds, five ounces. He shot five bullets into 0.331-inches at 65 yards on the day he called me, and he’s just getting started.

The word to produce has been given and BB Pelletier will receive the first rifle off the production line. Crosman is going with a plain brown cardboard box with a printed paper label to avoid the cost of lithography, because they know their customers will be shooters who know their stuff — not discount store commandos. They also know that firearm shooters are now well aware of big bore airguns and they believe this one will blow their minds!

Are you ready for this? Crosman knows their chief competition very well and they know this rifle can’t sell for wads of money. At this time the rifle is caliber-specific, so they have to compete on something other than the flexibility their competitor has. Ed was pleased to tell me the initial run of 500 rifles will retail for $799. They will shoot 100-grain lead projectiles that get 642 foot-pounds at the muzzle. Yes, friends, this is a deer rifle for sure! But wait…

Ed tells me that a true big bore, possibly a .72-caliber behemoth, is being developed. He has already prototyped it and has gotten 1,250 f.p.s. from a 600-grain bullet. That’s 2082 foot-pounds of energy at the muzzle! The one big problem with this one is recoil. This rifle kicks so hard that it broke a printed stock after five shots.

In two weeks I should be able to begin reviewing this amazing 21st century .30-caliber steam gun for you.

Now, about the April Fool’s day blog — I know you guys love those reports and I promise to get to one real soon. How about today? 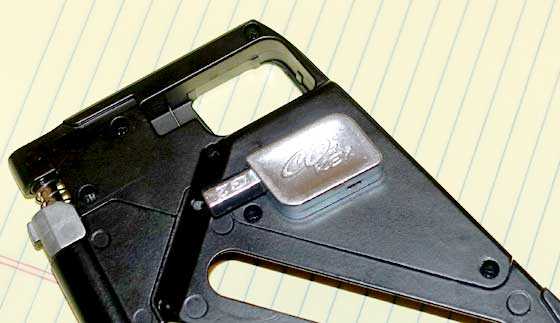