Home > Blog > Spring > How long can you leave that mainspring cocked?

How long can you leave that mainspring cocked?

Reader thedavemyster made the following comment this past Monday:

“Last night, I went to shoot my HW30S, and I realized (to my horror!) that I had put her away cocked; I had cocked the rifle to do a wipe down of the breech face as well as the face of the transfer port, then, like a dummy, I forgot to hold the barrel, take off the safety, pull the trigger, and slowly close the barrel. Hence, the rifle was cocked for 3 days — very uncool!

I shot some targets, and it seemed to shoot OK, but I recalled how you always say the chronograph is the tool to check the health of an airgun; I tried it last night, but there wasn’t enough light to get any velocity readings.”

Not that I’m complaining; I’m pleased as punch (especially since the gun is still shooting one ragged hole off a rest at 15 yards). But have you ever experienced an anomaly like that with a springer?”

I told Dave that I had never experienced that with a coiled steel mainspring. But then I thought about it and realized what I had done back in January of this year. I was reporting on Baracuda pellets in the report titled, Baracuda pellets then and now. In that report I was testing the performance of various Baracuda pellets and I used a PCP (my Air Arms S510XS) and the ASP20 to test them for accuracy. Both rifles performed admirably, but when I tested the ASP20, a curious thing happened. Here is what I said.

“The ASP20 can still shoot! And here is something that is a little curious. When I broke it open to cock it the first time, the barrel went all the way down without resistance. Either all the gas had leaked out of the piston or I had cocked the rifle long ago and never fired it. There was a pellet in the breech, so I fired it. It hit the target below where I aimed, so I reckoned the rifle was still good. I then fired four more shots just to check the sights, though I didn’t adjust the scope at all.

How long had the rifle been cocked? Well, not less than five months but more likely over a year. I really don’t know.”

I am not making any claims for gas springs/gas pistons. I’m just reporting what happened.”

Then I remembered a test I did way back in 1994. It’s a whole chapter on my Beeman R1 book titled “Mainspring failure test.” Here is what I said about that. And, by the way, when this report was written in 2006, I wasn’t letting people know that I was really Tom Gaylord.

So how LONG does a mainspring LAST?

Tom Gaylord published the only report I know about on the subject of mainspring life. In his R1 book, there is a chapter called the Mainspring Failure Test. He tested a factory R1 spring, a Beeman Laser spring, a Venom spring and a Maccari custom spring by cocking them all and leaving them cocked for ONE FULL MONTH! That’s 735 HOURS of being cocked. Throughout the test he took shots at intervals to see how the springs were holding up, then recocked them until the next test shot. Each spring was test-fired this way 23 times during the test.” 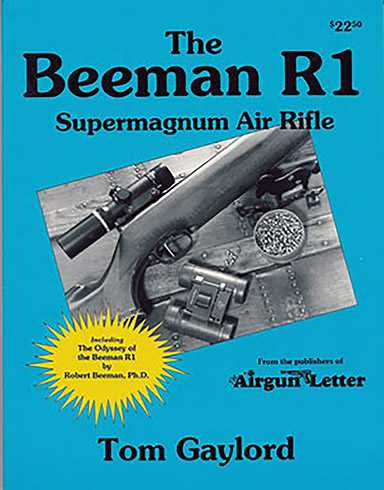 This old mainspring served an honorable life in a military trainer, which means tens of thousands to hundreds of thousands of shots. Even if it is a replacement, it still shows lots of service. The coils are bent AND collapsed.

Sometimes mainsprings break instead of bending

A full MONTH of being cocked is more abuse than anyone can heap on a spring gun in ten years of normal use. However, (and this is a long list of “howevers”) a Chinese spring rifle MAY have an improperly stress-relieved mainspring that can fail in less than 1,000 shots. An older Diana from 1986 to 2000 will often have a broken mainspring from improper stress relief. That is not 100 percent guaranteed, however. One inch of spring will be broken off one end of the mainspring. Sometimes it’s an inch off both ends of the spring. The broken piece or pieces will wind into the mainspring with the result that the airgun will shoot smoother than it ever has. 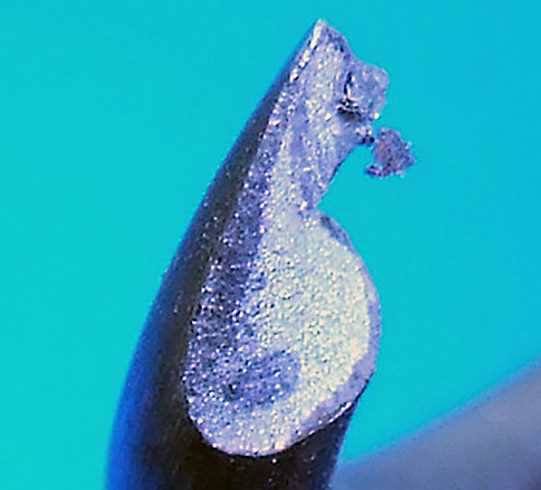 Close examination of the break point of a mainspring reveals a shattered structure, typical of an over-stressed steel that was not properly stress-relieved. The shading seen in the steel is real – not caused by shadows.

An FWB 124 will often have a bent mainspring from failure due to excessive pre-load (how much the mainspring is compressed when at rest). An HW77 with a factory spring may fail after about 12-15 years of little or no shooting for the same reason. An older Russian spring rifle may fail due to the spring wire being too weak for the application.

The Diana spring problem is a classic failure that’s still happening today, though not as often as it used to. It takes a chronograph to find it because the rifle will shoot smoother than ever.

Just to be sure of what I knew on this subject I went and looked at the R1 book. In the Mainspring Failure Test I saw that both the HW factory mainspring and the Venom mainspring did actually increase in power after being left cocked for up to 19 hours. Look at a portion of the chart. 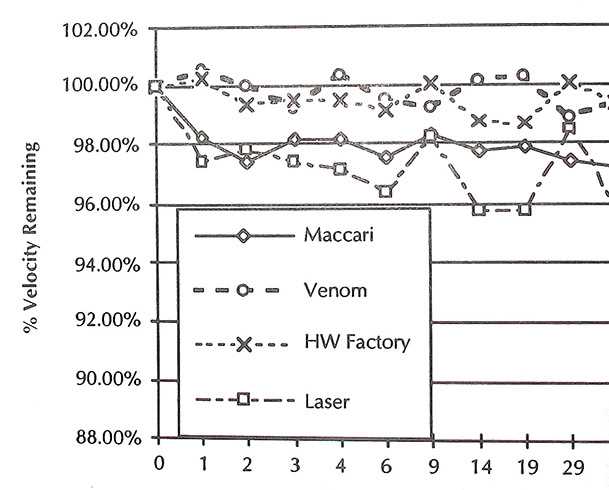 Dave, one last thought. You said you tested your rifle with the sun directly overhead. Does your chronograph have sky screen diffusers and were they positioned over the sky screens when you tested? If not, please retest your rifle outside in the shadow, where the sky screens “look” at the sky but can’t see any sun. An overcast day is perfect for this. I have seen direct sunlight fool a chronograph, though it’s usually by hundreds of feet per second — not the few that you saw.

Coiled steel mainsprings are a remarkable technology. I have had airguns over a century old whose springs were still doing their job. The lesson today is to use them but not abuse them. 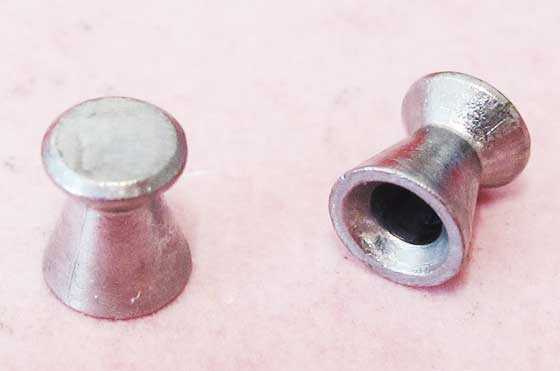