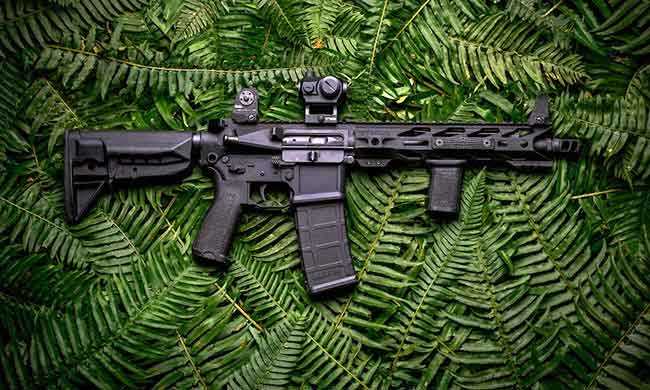 This is a special guest report from Philip Pages of STNGR Industries, LLC. That’s pronounced Stinger. Today Philip will tell us about the droop in a typical AR-15. He calls it down angle.

STNGR has a blog that Philip tells me gets around 30,000 visitors each month. For a shooting sports blog that’s pretty active. He asked to write a guest blog and I suggested this topic for some reasons I will reveal at the end.

Take it away, Philip.

How much down angle does a typical AR-15 have?
By Philip Pages

When it comes to firearms, there are many different options on the market for consumers. One of the most popular types of firearms is the AR-15. This weapon has become extremely popular in recent years due to its modularity and versatility. From different barrel lengths to a plethora of aftermarket accessories such as handguards to different chambering options, the possibilities are endless. So much so that building an AR-15 has become known as “Legos for adults.”

However, one question that often arises is how much down angle does a typical AR-15 have? Down angle is something that those familiar with airguns know a lot about.

But does that same principle translate to the AR-15? In this blog post, we will explore that question and give you some insights into the down angle of this popular firearm.

What is down angle?

First, it’s important to define what exactly “down angle” is. In the context of airguns and firearms, down angle is the difference in elevation between the muzzle of the gun and the point of impact. In other words, it is the angle that the bullet will travel in relation to the ground. The higher the down angle, the more horizontal the trajectory of the bullet will be.

A lot of factors can affect down angle, such as the type of gun, the type of ammo, the weight of the bullet, and even the weather.

Another important point is that, contrary to popular belief, bullets exiting a rifle’s barrel do not fly in a straight line. Rather the flight path follows a parabolic arc similar to the trajectory of a thrown football.

Think about it this way. As soon as the bullet leaves the barrel, it is immediately impacted by a host of factors such drag, muzzle velocity, gravity, wind and even the external temperature. Not to mention factors such as bullet size, shape and weight.

That’s why precision shooting is so difficult. A seemingly small and insignificant change in any of these factors will be magnified over a few hundred yards which could translate to being off target by multiple feet.

Definitely not what we’re aiming for (pun intended)

So do AR-15s have down angle? And if so, how much? The answer to the first question is yes! However, the next part is a lot more complicated.

Remember how I said that AR-15s were so popular because of how modular and customizable they are?

A LOT of barrel options out there

Each of these barrel lengths and twist rates changes the exit muzzle velocity which alters the bullet’s flight path which in turn changes the required down angle when zeroing the weapon.

So, what’s the standard down angle for an AR-15?

Unfortunately, there is no definitive answer to this question. Like we said before, there are just so many different factors at play that it’s almost impossible to determine a universal standard.

However, we can make a few generalizations. For example, most AR-15s will have a down angle between 0-30 minutes.

Of course, this is just a rough estimate and your mileage may vary

Hopefully this gives you a better understanding of down angle and how it relates to the AR-15.

At the end of the day, airguns and AR-15s share a lot of the same similarities. A lot of the principles learned from shooting airguns can be applied to AR-15s and vice versa. That’s the beauty of shooting sports, the skills are so transferable.

Why this guest blog?

This is BB talking now. I asked Philip to write this blog because we airgunners jabber about “barrel droop” all the time and I have often said that firearms have the same problem. Today he has addressed it. In case you didn’t catch it, down angle in the first paragraphs is different than trajectory, though they both do similar things — drive the bullet lower than the point of aim. But firearm bullets move so fast that at typical airgun distances of 0 to 50 yards the droop or down angle doesn’t stand out that much. Please note that Philip says an AR-15 can have 0-30 minutes of down angle. That’s droop, folks.

I see this at my rifle range a lot. A guy brings out a new AR and a new scope, and he either mounts it right at the range or at home just before he comes. Then he tries to sight in at 100 yards and discovers his bullets are impacting 12-inches low. Sometimes it takes a lot of shots before he realizes that, because he wasn’t expecting it. So, what does he do? He does what all of us once did — he cranks in 48 clicks of elevation (quarter-minute clicks take 48 to raise the impact of the bullet 12 inches at 100 yards — yes, I’m being sloppy about yards and meters, but that’s not the point).

If his scope is a premium one that’s also new he may have solved the problem. If it’s an El Cheapo or a scope he took off another rifle (i.e. it’s been adjusted already), he may have relaxed the scope’s erector tube return spring so much that now his rifle will not hold a zero. The erector tube and therefore the reticle bounces around with every shot. And finding that out takes a lot more ammo! When that is discovered he usually blames either the rifle or the ammo or both.

I once helped a guy in just that situation. He was shooting about 6-inches below his aim point at 100 yards. We made some makeshift shims that got him on the point of aim without all the extra elevation adjustment. There was some but not as much as before the shims. But 30 minutes of down angle? There is no way to shim for that!

My thanks to Philip for today’s blog it’s an interesting subject of which both airgunners and firearm shooters need to be aware.