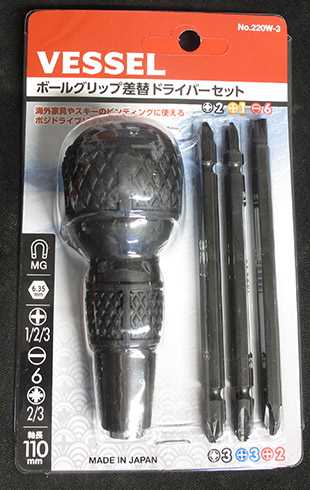 A set of Vessel screwdrivers. There are five Phillips bits and one slotted bit.

Sometimes this blog is worth a lot more than we pay for! Today is such a day. Today I review and test the Japanese Vessel screwdrivers that reader JerryC (the Pelletgage man) told us about.

In the comments to Part 1 of the Tools you need (to maintain airguns) reader JerryC told us about Vessel Phillips screwdrivers.

“For many years, I was a manufacturing engineer involved with process and assembly of electronic components, circuit boards, and higher level modules and appliances. When I worked for Fujitsu, my Japanese manager had boxes of screwdrivers, common #1 and #2 Phillips type, which he called “cross” drivers. He had them shipped from Japan, they were Vessel brand. His belief was that there was a difference between the American and Japanese standards.“

There was a noticeable improvement using these Vessel brand tools. You could hold the screwdriver straight up, put a screw on the tip, and roll your wrist to have the driver in horizontal position, with the screw holding in place (not by magnetism).. I tried to find drivers locally that could do this, and had little success. I even gave a Vessel screwdriver to a sales rep for Xcelite. In a few weeks, I received a polite and very specific letter with a diagram showing the grind angles and relief of a Phillips patent driver bit. He admitted that the tooling used at their factory was worn and did not meet certain limits.He thanked me for making this obvious to their staff. My Japanese boss was much amused.“

I notice that your small screwdrivers are Wiha brand, and I have tried my simple test on their bits, finding them pretty good. Still, I have several Vessel brand (not usually available in the USA) and they work so much better than most, – I do suggest that these basic #1,2,3 sized drivers made by “brand” manufacturers can cam out and damage a screw that will come right out with a good driver bit.

This guy on YouTube does amazing tests on tools, and this video on screwdrivers does test “camout” and even has the Vessel brand under test. https://www.youtube.com/watch?v=xtZ2jh_J7XE”

BB will comment now. That video is excellent! It’s 15 minutes long and I recommend it to all readers. Vessel did not win but it did place high in the running.

Today I will show you the results of a couple tests I both watched and conducted. I’m not trying to sell you anything, but since we have been talking about tools, thanks to reader Alex2no, I thought I’d do more than just comment on this tool that JerryC recommended.

My neighbor, Denny is reader sawdust on this blog. He is currently making walnut boxes to be used as bridesmaid gifts at his son’s wedding in October — in Hawaii, no less! Denny does a lot of nice things for me, so to thank him I bought him a small set of Vessel screwdrivers when I bought my set.

As I told you Phillips screws are my bane, and I was really interested in what JerryC had to say about the Vessel brand. The picture at the top of this report is the set I bought for each of us. Each set cost $18 new on eBay and the shipping was free.

This set appears cheap to me because it has bits that fit into a handle. Every screwdriver I have that fits into a handle has a sloppy fit and is next to useless. That goes double if it’s a Phillips. I sorta bought it for that reason — to see if Vessel got past the cheap combination kit plague. And they did.

I must report that there is no play when the Vessel bit is in the handle! Also the handle is soft rubber that cushions the palm of your hand when you press down hard, as I will do in today’s tests. And by the way, this set does not ratchet. It’s simply a screwdriver.

You need a good fit of the bit to the  screw head to drive any screw, and in my experience Phillips drivers are prone to cam out of the screw head. Denny says he thinks the screws are the largest part of the problem and I agree. We know how many millions of screws are made and when the tooling starts wearing out the screw head gets sloppy. How will Vessel drivers deal with this?

I’m not testing screws today, but what I can say is the Vessel bits fit the screw head very tight.

Denny called me over to his garage workshop last Saturday to see him use his Vessel drivers for the first time. He was installing brass hinges on the walnut gift boxes he was making for his daughter-in law. Like me he had previously purchased a special set of screwdriver just for this work because he makes a lot of gift boxes and music boxes. He said the Vessel driver bit both fit the small number one screw head tighter and the bit was magnetized powerfully to hold the brass-plated screw. Now JerryC did say his screwdrivers were not magnetized, so there is a difference between what he has and what I’m testing.

The number one Vessel bit held the Phillips screw tighter than Denny’s other dedicated screwdriver.

Denny made a jig to position his box hinges precisely. He used the screw holes in the hinge as a guide to drill what I thought was going to be a pilot hole but turned out not to be. 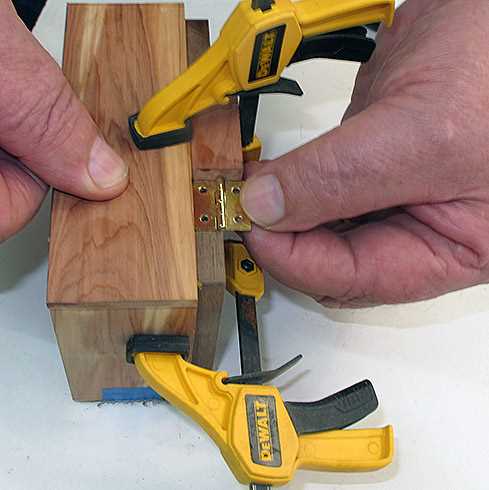 Denny made a jig to install his brass box hinges precisely. The holes in the hinge were used to drill positioning holes

I was surprised when he didn’t drill complete pilot holes for the screws. He just drilled positioning holes to know where to start the self-tapping screws. Then he screwed each screw in by hand, allowing the screw to pull itself into the walnut. Once that was done he positioned the hinge and I held it for him as he screwed the screws into each hole.

Denny drove each screw in by hand without drilling a pilot hole.

Denny told me to tell JerryC that these Vessel screwdriver bits work very well. He was surprised by the difference they made, and so was BB, as he watched. So BB asked Denny for a small piece of scrap oak that he could use to test the Vessel bits further.

I went to my garage workshop and drilled a location hole for a Phillips screw. Then I screwed it almost all the way in and back out again. I stopped the first time the screwdriver came out of the screw slot. The hole I used to locate the screw was less than a tenth of an inch deep (less than 0.254 mm deep), so all it did was locate the tip of the screw.

I drove a Phillips screw into oak without a pilot hole.

This is how deep I was able to drive the Phillips screw into oak without a pilot hole. I stopped when the screwdriver cammed out of the screw head the first time.

I then unscrewed the screw and examined the head. Though the screwdriver had come out of the hole once at its deepest penetration the screw slot appeared to be fresh, sharp and okay. 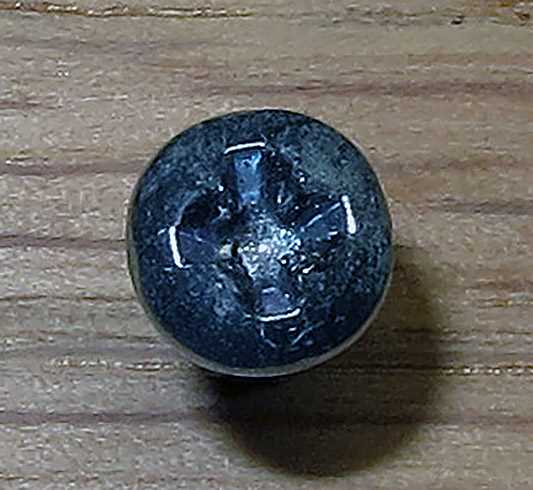 After being screwed into oak almost all the way and then removed, this is what the screw slot looks like.

Then I decided to drill a full depth pilot hole to see whether I could screw the screw all the way flush in the oak.

The hole on the right is the one the screw came out of. See how much larger it is than the pilot hole I drilled on the left.

With a pilot hole I was able to screw the screw in all the way. The driver came out of the screw head once during this operation. 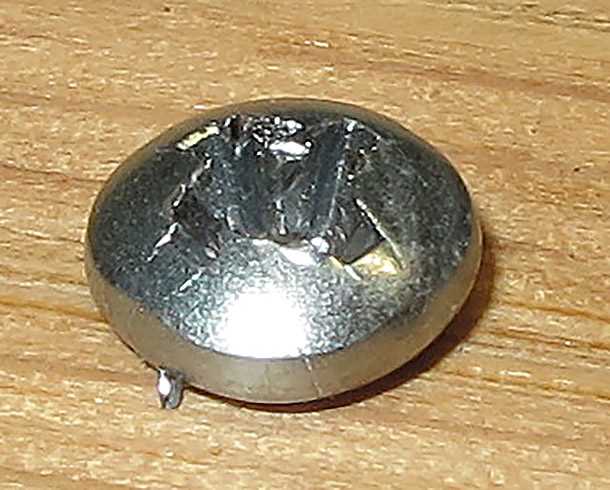 The Vessel driver screwed the screw in all the way with a pilot hole.

I would like to comment that Vessel bits are very magnetic. They hold the screw securely without outside help.

The Vessel screwdriver is handy, precise and easy to operate.

Oh my — a blog about a screwdriver on what is supposed to be an airgun blog! What is the world coming to?

I took the time to report on this tool because I think it is a standout. Watch that video if you haven’t yet, because there is a lot to learn.

If you are wanting a good Phillips screwdriver, this could be for you. It’s certainly affordable. And it will be easy to keep the Phillips and slotted screws on your airguns tight.