We are also examining the UTG TBNR bipod and I will have some things to say about that, as well as the Meopta MeoSport R riflescope that is an affordable scope offering from Meopta. Lots to say so let’s get started.

I shot the Avenger Bullpup from 25 yards both from a bipod and from a sandbag rest. I shot it both ways — from its magazine that is now repaired and also from the single shot tray, to see if there are any differences between those two means of loading. I shot 10-shot groups in all tests so each setup was tested thoroughly. Plus we have the results of past tests to compare to. All things considered, we now have a very good picture of how this bullpup performs. I only used one pellet — the JSB Exact King Heavy Mark II that has proven to be the most accurate pellet in this rifle.

I illuminated the red dot in the Meopta scope reticle for this test. The scope was never adjusted during all of today’s shooting.

The first group was loaded singly and fired from the bipod. Before the test I took the time to examine the bipod’s adjustments and I was able to get them locked in tight. I’m not a fan of bipods, but I will say that this one is as steady as a bag rest.

The group measures 0.63-inches between centers at 25 yards. Remember that this is a .25-caliber rifle. Curiously the shots moved up and to the right as I shot — exactly what happened in Part 6 on the first bipod test with this pellet. The group measures 0.63-inches between centers which is better than the first group with the bipod in Part 6 but not as good as the second group in that report that measures 0.406-inches.

There were no called pulls in this group or indeed in the entire test. 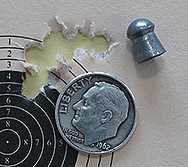 When fired from the bipod single shot, ten JSB King Heavys made a 0.63-inch group at 25 yards.

Next I loaded a magazine. Since the .25-caliber magazine only holds 8 pellets I reloaded two more pellets after the mag was empty. This time 10 pellets went into 0.444-inches at 25 yards. I felt no difference in the hold, but you can see the results.

When shot from the magazine, ten pellets went into 0.444-inches at 25 yards. This was a surprising group for me.

Why did the magazine give a significantly tighter group? All I can think of is I got more focused as I shot. There were certainly no called pulls in either group.

The modified magazine is feeding perfectly now. The last two pellets failed to advance on the first mag (remember, the mag only holds 8) but that is the tightness of the clear mag cover that I modified. It never happened again in the test.

There is resistance when the sidelever is pushed closed but it’s just the pellet chambering in the breech. The magazine has no resistance. Friday’s fix was perfect!

Now it was time to take the bipod off and rest the rifle in a sandbag. Then I would shoot the same two groups over again. I refilled the rifle before doing this as neither of my carbon fiber tanks is filling up to 4350 psi.

This time the Avenger Bullpup put 10 Exact King Heavy pellets into a 0.32-inch group at 25 yards. I have to say that the scope dot was not any stabler when the rifle rested on the bag than when it was on the bipod. Apparently the bipod puts some feedback vibration into the stock when the rifle fires.

When rested on a sandbag the Avenger Bullpup put 10 pellets into a 0.32-inch group at 25 yards.

The final group was shot from the sandbag with the magazine. Again, the first mag held 8 and the second one held 2. Ten pellets shot from the magazine went into 0.234-inches at 25 yards. That is the smallest 25-yard group this rifle has fired. The previous record was ten in 0.299-inches at the same distance.

When I rested the rifle on a sandbag and used a magazine the group shrank to 0.234-inches at 25 yards. It’s the smallest 25-yard group in the series!

What have we learned? First of all, that the Avenger Bullpup in .25 caliber is accurate. I think the sandbag demonstrates the inherent accuracy best because it does seem in both tests that the bipod added something to the group sizes. While bipods are great for some kinds of hunting, just be aware that they may open your groups a little.

Next we learned that Avenger magazines are all over the place when it comes to their size! It may be that because my test rifle was pulled from an early shipment it isn’t typical; I have no way of knowing that.

We learned that the Meopta MeoSport 3-15X50 RD scope is not only in the affordable range, but offers all the quality we have come to expect from this line of optics. It’s certainly a scope worth consideration if it offers the features you seek.

I learned that the UTG TBNR bipod is very adjustable and can also be locked down tight in whatever position you desire within its range of adjustability.

The Avenger Bullpup with the MeoSport 3-15X50 scope on the UTG TBNR bipod.

The .25 caliber Air Venturi Avenger Bullpup is a powerful, accurate hunting PCP that offers a wide range of adjustability to the user. If you are a fan of the bullpup style, it’s worth consideration.

The trigger is imprecise, but light. Once you are on it, hold on the target because it doesn’t take much to set it off.

The Avenger magazine works great, now that it has been modified. In fact the rifle is even more accurate with it installed than with the single shot tray — an outcome I would not have predicted.

The rifle gets a lot of shots at good hunting power. Remember that I adjusted the regulator down lower than the factory setting and the power setting down just a bit. I’m not sure that bought me more than a couple extra shots, but at least I did get them.

How to lubricate your spring-piston airgun