First, two announcements. Don’t miss the latest video episode from Airgun Academy. Episode 13 is about adjusting scopes, ironically enough. I say ironically in light of what we’ve been doing with the FWB 124. Also, the October podcast is up. It’s about selecting the right youth airgun.

Ever since I saw it at the SHOT Show in January, I’ve wanted to test the BSA Laser Genetics ND-5 laser designator for you. Now that I have it in hand, I’m slightly stumped how to proceed. How would you test the first atomic bomb, if some of your developing scientists told you it would destroy the world? How do I test a flashlight (I know that BSA Optics hates for me to call it that, but it’s the best analogy I can give) that shines brightly for five miles (8.05 kilometers)? And who needs such a thing? 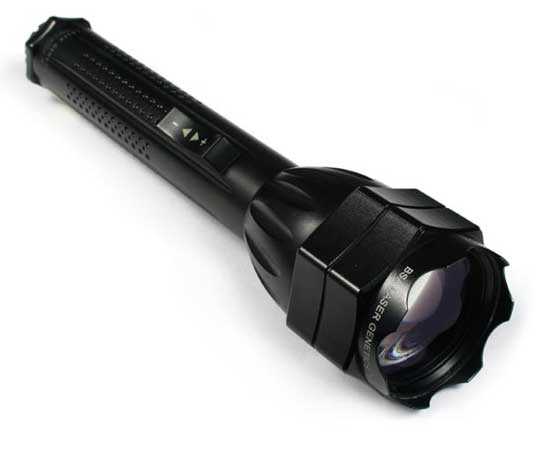 Well, I don’t really care who needs it, I WANT it! The ND-5 is a long-distance laser designator (a flashlight) that shines a highly visible green laser beam (532 nanometers wavelength) over unbelievably long distances. And there’s a simple thumb switch to adjust the collimation of the beam, which is just fancy talk for making the beam wider or narrower. A round button on the end of the barrel turns the light on and off, and the lens bezel is made to crack skulls, just like a tactical flashlight.

The beam can be set to narrow, which is hundreds of times as wide as a normal laser beam. Because it’s coherent light, it maintains this tight beam out to a far distance. While the above picture seems to show a white light rimmed in green, it’s actually solid green. The laser was so bright that it overwhelmed the camera. 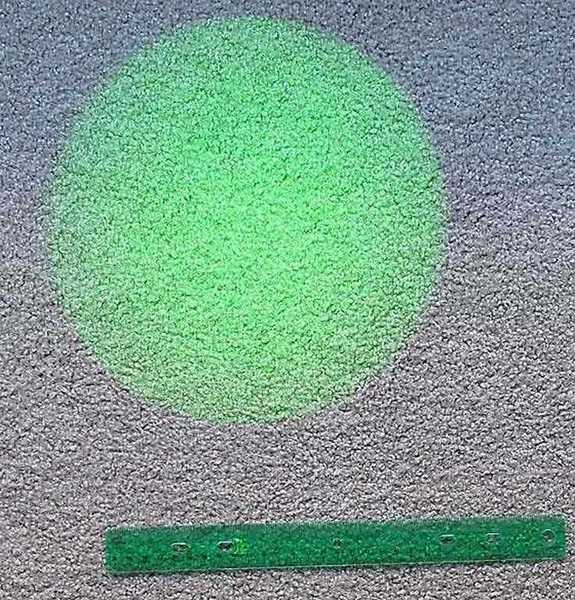 Or you can adjust it all the way out to wide, which at three feet is just under a foot in diameter.

A power button on the end of the designator turns the light on and off. 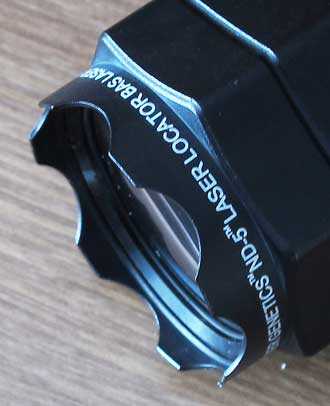 The bezel is shaped for cracking skulls.

So, this is really a night vision device. And it’s one that doesn’t bother game animals. You can see the eyes of animals 1.5 kilometers away as clear as day when you shine the beam on them. I saw this in a demonstration video in the Gamo booth at the show. Okay, so typical NV gear costs $500 and more and gives you visibility out to several hundred yards. Or, you can buy one of these for $330 and extend your night vision by several miles. You decide. Oh, and you don’t have to wear this one. You carry it like a flashlight and use it the same way.

The designator comes in a handy padded carrying case that you’ll want to keep it in between uses. It uses 2 CR134A camera batteries to give up to seven hours of continuous use. It’s sealed with o-rings to keep water and dirt out, and the body is made from tough aluminum. 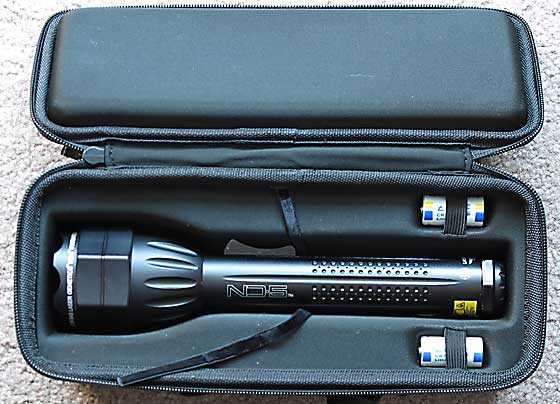 The ND-5 comes packed in a padded carry case that will hold it when it’s not in use.

One thing you’ll notice if you ever go to the SHOT Show is the proliferation of lasers. They’re everywhere! If you watch the darkened ceiling in the trade show main exhibition room, you’ll always see one or more laser dots walking along the girders and lights. But the ND-5 is to a normal laser like a Peterbuilt tractor is to a Mitsubishi pickup! The main display hall is not big enough to contain the power of this instrument. Even in a hall that measures a half-mile in length, the ND-5 is just starting to get the wind beneath its wings by the time it slams into the far wall. And that’s with all the lights turned on! You ought to see it in the dark!

The dark is where it’s designed to work. I can imagine varmint hunters, for instance, shining a light out and sweeping the country in front of them to determine whether they’re calling in a coyote or a cougar. It would make a difference whether you make ready your .17 HM2 or decide to use the .257 Roberts. Or at least get the .357 Magnum ready in case there’s a screwup and you become the hunted!

How can I show this more effectively?
So, I’m looking at ways I can show you this wonderful device, or at least how I can test it in a way that my description sounds interesting. If you can come up with anything to help me, please let me know.

Now for something completely different
I’ve been wanting to do a blog for awhile about reloading firearm cartridges. Just a one-parter to show the basics of what goes into turning a fired case into a loaded cartridge. I was out at the range yesterday and shot up some .45 Colt ammunition that I reloaded using the simplest of hand tools.

I want to do this report so we can talk more about ballistics, and I can use some firearm analogies that apply to airgunning but whose meaning would be lost if you don’t know how a cartridge works. For example, when reloading, case volume comes into play. There’s a relationship between the filled and empty volume of a cartridge case and the type of gun powder being used that determines the efficiency of the round created. And, you might get higher velocity if, before you fire each shot, you elevate the muzzle of the gun to get the powder piled up back near the primer flash hole. But do you even know what a primer flash hole is and how it works?

Well, that exercise is analogous to a spring-piston gun that’s most efficient when held in one orientation rather than another (i.e., held normally as opposed to held upside-down). Or held loose versus tight.

So, may I write this one report to explain how a cartridge is reloaded without offending anyone? I know it’s off the main track of airgunning, but it really isn’t as far off as it seems.