By Tom Gaylord
exclusively for PyramydAir.com. Copyright 2003 All Rights Reserved

It seems fantastic that an air rifle can launch a pellet faster than 1,200 feet per second (f.p.s.), but some powerful rifles can. However, just because it's possible to do it doesn't mean that it's also desirable. In fact, it isn't. To understand why, you must understand how a modern pellet works.

How fast does a pellet gun shoot? 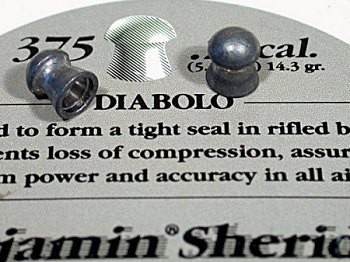 The classic diabolo pellet has a pinched waist and a hollow skirt. The shape of the nose can be round, pointed, flat or anything else. The skirt can be thick or thin - long or short. All these variables affect the flight of the pellet somewhat, but the basic diabolo shape is what affects it the most. These .22-caliber Benjamin-Sheridan pellets are very similar to Crosman's Premier design.

Most top-quality pellets are made with a pinched waist - a so-called wasp waist. The correct term for this design is diabolo. A diabolo pellet is stabilized (prevented from tumbling) by the high air drag on its tail. A hollow skirt plus the pinched waist work together to produce this drag, plus a forward weight bias keeps the nose pointed in the right direction. Where a conventional rifle stabilizes the bullet by spinning it rapidly, a diabolo pellet will even be reasonably accurate in a smoothbore gun. It works exactly like badminton "birdie" and for the same reason - a high-drag skirt. Most modern pellet rifles and pistols are rifled which does cause the pellet to spin on its axis in flight, but the rate of spin is too slow to stabilize the pellet by itself. When the pellet leaves the muzzle it starts slowing down very rapidly. It will lose more than half its muzzle velocity within the first 100 yards of flight. If the pellet was shot at a speed above the sound barrier, it will also be destabilized by passing through the sonic pressure wave it created. The sound barrier varies, but it usually remains near 1,100 f.p.s. at sea level on a normal day. When a pellet goes faster than the sound barrier it makes a sharp crack, which is the "breaking" of the barrier. It will be less accurate than if it were shot from the same gun at 900 f.p.s. or less, where the sound barrier is not a problem. While 900 f.p.s. is quite a bit below 1,100 f.p.s., there is great turbulence whenever the sonic barrier is approached. For this reason, knowledgeable shooters never allow their pellet rifles to shoot much faster than 900 f.p.s. If they buy one of the supermagnums that do shoot much faster, they use the heaviest pellets they can find to get the muzzle velocity back down.

Missiles that travel faster than the speed of sound slow down much faster than missiles going slower than the speed of sound. To retain their velocity, supersonic missiles must be very aerodynamic, while slower missiles are less aerodynamic.
On the low end of the scale, Olympic target airguns seldom shoot pellets as fast as 600 f.p.s., yet they will outshoot almost any other pellet gun at short ranges. The target air pistols are nearly as fast as the target rifles - ranging from 450 f.p.s. to 580 f.p.s. Both target rifles and pistols shoot wadcutter pellets with flat noses that cut perfect holes in target paper. Wadcutters are the least aerodynamic pellets on the market, but since the target guns don't shoot very fast, it doesn't matter. Most hunters want a rifle that will shoot a large heavy pellet accurately at 750 to 900 f.p.s. Most general shooters - the so-called plinkers - want to shoot at 600 to 900 f.p.s. with a rifle and 350 to 550 f.p.s. with a pistol. High velocity does not mean high quality or accuracy. If fact, it might mean just the opposite. The diabolo pellet is designed to give the greatest accuracy at speeds well below the sound barrier, so select your airguns accordingly.
The boattail pointed bullet is designed for supersonic flight at all times. This is a Sierra MatchKing, which is one of the top target bullets in the world. It is made of a copper jacket around a lead core with a tiny opening in the point. They come in all popular calibers, but this .30 caliber 168-grain bullet is what made the line famous. It's used for long-range target shooting, primarily.

WHAT ABOUT SOLID PELLETS?
Okay - if hollow-tail wasp-waisted pellets aren't accurate above the sound barrier, what about solid lead "pellets?" Several brands of these interesting "pellets" are now available, but do they give the accuracy you require? Another name for these solid pellets is bullets, because that's exactly what they are. So what works for bullets also works for solid pellets. 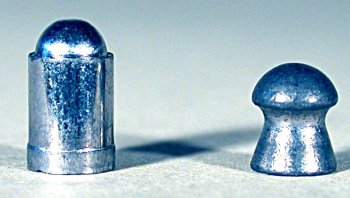 These are both .22-caliber pellets. The 30-grain pellet on the left is a solid lead pellet from PelletMan. The lack of a hollow skirt and a wasp waist means this pellet has to spin faster to stabilize in flight. Than means it must be shot faster than a normal pellet. It has a cupped base, plus there is a larger-diameter driving band around the base to take the rifling and seal the bore. The Crosman Premier diabolo on the right weighs 14.3 grains.
As it turns out, .22 long rifle ammunition, which fires a 40-grain lead bullet, is ALSO less accurate if the bullet goes supersonic. Why? Because when it is just barely supersonic, as most .22 LR high-speed ammo is, the bullet gets tossed around by its own sonic wave. To get around this, a bullet has to be extremely streamlined and it needs to be shot at several times the speed of sound. So, if you can get your solid pellets out the muzzle at 1,400 f.p.s. and faster, there may be an advantage. Less than that and you are tossing away accuracy. That's why all .22 rimfire target ammo is subsonic. Learn from the target shooters and stay well under the sound barrier. If you do shoot solid pellets, remember that they must go faster to stabilize because they don't have the high drag of the hollow tail. The spin imparted by the rifling must stabilize them.

BUT DOESN'T A FASTER PELLET DROP LESS ON ITS WAY TO THE TARGET?
Yes, it does. It also wanders all over the place instead of tracking along an accurate path. So you can either hit your target with the slower pellet or you can miss it with a faster pellet that doesn't drop as much - it's your choice. Back in the late 1800s, men shot at 1,000 yards and even out to one mile with bullets that barely went supersonic, if at all. They had to judge the range more than shooters do today, but their rifles were very accurate. The bullet that hits the target does more damage than the one that misses at high velocity.

SO, ARE THE SUPERFAST AIR RIFLES BAD?
Not at all! They're great - especially if you need extra power for hunting and long-range shooting. But use them correctly. Match their high power with heavy pellets so you get all the accuracy they have to offer. For example, a Gamo 1250 will shoot over 1,200 f.p.s. in .177 caliber with the lightest pellets. RWS Hobbys weigh about 6.9 grains and Skenco lead-free pellets are more than a full grain lighter. You would not use them in a 1250 because they are too light. Instead, use a Beeman Kodiak/H&N Barracuda (same pellet) that weighs 10.6 grains or a Crosman Premier 10.5-grain pellet. These will both slow the velocity down to somewhere in the 1,000 f.p.s. region where the rifle can do its best. If you have a choice of calibers, such as with the RWS 350 Magnum, which comes in both .177 and .22, get the .22 and use the heavier pellets. You will get all the smashing power the powerplant has to offer. If you absolutely must have a .177 in one of the super-powerful rifles, always match it with the heaviest pellets for the caliber.

CONCLUSION
Airgun quality does not come from velocity. It comes from accuracy, smooth operation, good design and quality control and other factors. Don't allow velocity alone to rule your airgun choices because if you do, you will miss most of what is good about this hobby.