Home > Blog > Education / Training > Does velocity drop as the pressure drops in a PCP tank?

Does velocity drop as the pressure drops in a PCP tank?

Today’s question is one I hear a lot from newer shooters. They know the air pressure in a precharged gun reservoir drops with every shot, and they wonder how that affects velocity. For this discussion, I’ll ignore guns with regulators, though I’ll come back to them one day.

You might think velocity drops as the pressure declines, but that’s not the case. To understand why, you need to understand how a typical knock-open valve works – the kind found in all modern PCP airguns.

When the valve seal contacts the seat again, it stops more air from escaping the reservoir until the valve stem is struck again. The time the valve seal is off its seat, combined with the air pressure in the tank, determines how much air escapes the valve. But, there IS a limit to this!

The valve only opens so far!
The return spring sits on a seat of its own, behind and in line with the valve stem. When the return spring is fully compressed, that’s as far as the valve can open, no matter how hard it’s hit. Since most guns are adjusted by their makers, the hammer and mainspring are already at or very near the maximum for that valve. Hitting it harder just destroys it.

Let air pressure do its work
The knock-open valve regulates itself within limits. As air pressure in the reservoir drops, it puts less force into closing the valve, so the valve remains open just a fraction longer. That lets more air escape. Though the air is at a slightly lower pressure, there is more of it (because the valve is open longer). If your barrel is long enough to benefit from it, you get the same velocity shot to shot.

Once the pressure drops below a certain point, this relationship ends and velocity does start to drop off. Therefore, every PCP airgun has a number of shots at a consistent velocity. The designer of the airgun determines what the number of shots and the velocity will be by selecting a return spring rate, a mainspring rate, a hammer weight, the length of the valve stroke and the size of the valve stem passageway. Guns with adjustable power have a much broader set of values, so they work with differing hammer strikes, and they get more shots when adjusted to lower power. It sounds very technical, and it is until the design has been proven. Then, it becomes very simple for the owner to use. Such is the miracle of the modern PCP airgun. 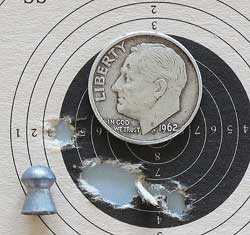