Today, we’re going to look at an airgun phenomenon that has recently come to a close, though it may not be gone forever. I’m referring to the air cartridge by Brocock. Air cartridges have existed for a long time, but the Brothers Silcock (Brocock) put it on the map.

Instead of a reservoir – a self-contained air cartridge!
People who write about airguns make a lot of references to firearms because the two are closely related. But one thing separates them. A firearm uses cartridges, where all the energy for the shot is stored. The gun is just a tool for containing this cartridge. Not so for most airguns! Most airguns store the energy in the gun, rather than in a separate cartridge. That makes an airgun work a little differently. People always ask why there aren’t more full-auto pellet guns. The answer is, because it’s hard to feed soft lead pellets through a rapidly operating mechanism without damaging them. A cartridge, however, handles such abuse fine.

The air cartridge is just like its firearm counterpart, in that it contains both the energy for the shot, in the form of compressed air, and the projectile. Feeding problems are solved by the much stronger cartridge body. Additionally, there is a very big advantage to using an air cartridge – if it is made to approximately the same size as a firearm cartridge, then firearms of that caliber can easily be adapted to use it. Suddenly a whole new level of realism is possible!

A short history
Saxby-Palmer was the pioneer of the modern air cartridge for airguns, with the Ensign being a popular early rifle. The cartridge was about the size of a shotgun shell. They were recharged from a VERY cumbersome hand pump that had to be bolted to a bench or plank. They were filled with 1-6 pump strokes that varied the power, of course. A British report puts the .22 Saxby-Palmer at 800 f.p.s. when pumped to full power, but the one I saw was only making the mid-600s. The difference could be that the one I saw used the early Mark I plastic cartridges, while the other one may have used the stronger metal Mark II cartridges. 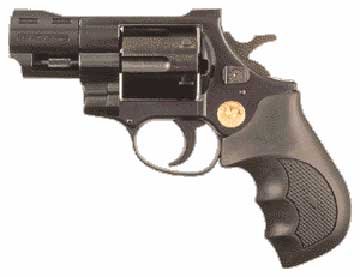 Firearms were converted to use the air cartridge. This one was made by Weihrauch.

Brocock bought the liquidated Saxby-Palmer company in 1989 and began producing the cartridges themselves. They became know as the Brocock Air Cartridge System or BACS. In time, Brocock improved the air cartridge until it became the Tandem Air Cartridge, or TAC. This cartridge is the size of a .38 Special cartridge and fits in rifles and revolvers. It is a marvel of small metal parts and O-rings that have to be carefully reassembled for every charging. There is a lot of cleaning and lubrication to do, as well. 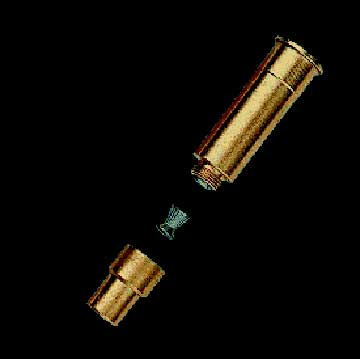 The Tandem Air Cartridge is the size of a .38 Special round.

Filling the cartridges
There are three ways to fill a TAC. One is by a labor-intensive hand pump called a Slim Jim. It takes several pump strokes to fill the cartridge this way. The next way is by using a special adaptation of the Swedish manual airgun pump. Usually one or two strokes at the most is all it takes to fill the cartridge. The lazy man’s way it to use a scuba tank with a jig holding six cartridges. They all fill at the same time with no effort.

The biggest drawback
There was a problem with the air cartridges. It took WORK to reassemble, recharge and reload them! It’s very much like reloading for firearms, and it is as bothersome as reloading black powder rifle cartridges, which I believe take the most work of all! Airgunners are not familiar with this, for the most part, and they rebelled when they saw all the work that was required! I can’t begin to tell you how many shooters I watched as they lusted for and eventually acquired an air cartridge gun – only to discover this evil truth! Boy, did the wind ever leave their sails fast! These are the same people who won’t shoot a precharged gun because they don’t want the hassle of a scuba tank, and now they are saddled with an entire support system!

The End
The end of air cartridges, at least from Brocock, came in January, 2004, when the Anti-Social Behavior Act of 2003 went into effect. But the guns and cartridges are still around and will no doubt become collector’s items rather soon. That’s a good category for them, because in a sporting airgun, the TAC leaves a lot to be desired. 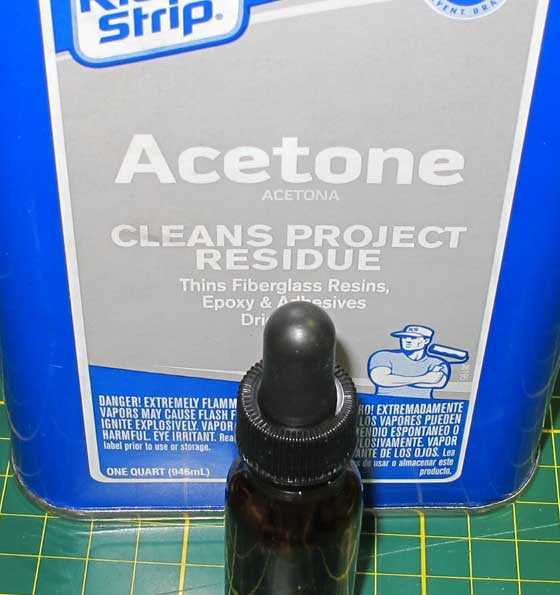