The RWS 850 AirMagnum is a bolt-action repeater from Umarex.

We’ve really waited for this rifle! There’s too much to cover in one post, so I’ll have to break up the report.

Though the rifle is made by Umarex, both the packaging and the name on the rifle say RWS 850 AirMagnum. The rifle is a conventional bolt-action 8-shot CO2 repeater. It uses a removable 8-shot circular magazine to handle the pellets, and it’s a different kind of magazine than the standard Umarex 8-shot magazine we’ve used. This one is mostly synthetic with a metal ratchet gear attached in front.

The rifle has the traditional RWS logo. The automatic safety button extends from the back of the breech.

The rifle is powered by an 88-gram AirSource CO2 tank that resides inside the forearm. There is no provision for using 12-gram powerlets. The hollow stock is dark gray synthetic with pebble-pattern rough spots for both hands to grip, and the buttpad is a thick black rubber pad. The cheekpiece is on both sides of the stock, and the shape of the pistol grip is completely symmetrical – but the bolt-action cannot be switched to the left side of the receiver. So, the rifle is semi-ambidextrous. 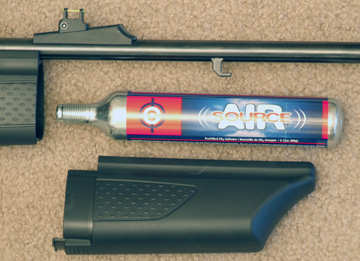 The forearm slides off to insert the 88-gram AirSource tank. 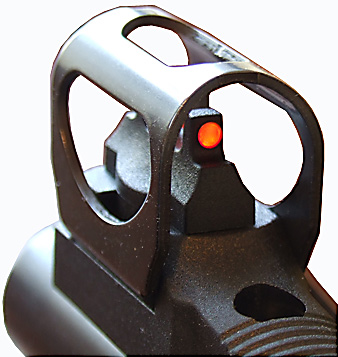 The hooded front sight has a red fiberoptic insert. 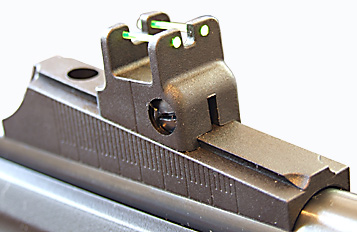 The rear sight is a square notch with two green fiberoptic elements.

An adult air rifle
The 23.5″ solid steel barrel reminds us that Umarex is serious about this rifle. Though the power is limited to around 12 foot-pounds in .22 caliber, this gun is meant for adult use in every respect, so that’s how I’ll test it. The rifle I have is .177 caliber, and I’ll use serious pellets for long-range accuracy testing – JSB Exacts, Crosman Premiers (I’ll try both 7.9-grain and 10.5-grain) and maybe one or two other top performers.

What does the 850 compare to?
Being made of synthetic and powered by CO2, there might be a tendency to compare the 850 AirMagnum to Crosman’s 1077 repeater, but that would be wrong. This rifle weighs 6.75 lbs. with a fresh AirSource cartridge installed. The 6-18x Bushnell Trophy scope I chose for the test added another 1.25 lbs., bringing the total to 8 lbs. While a powerful scope might seem a little much for most CO2 rifles, I used it because this one is priced in the intermediate range – not the economy class. It costs a little more than a Gamo CF-X, so that’s what buyers will compare it to. We know before testing that the Gamo beats it in power, but perhaps the 850 AirMagnum exceeds the CF-X in accuracy. 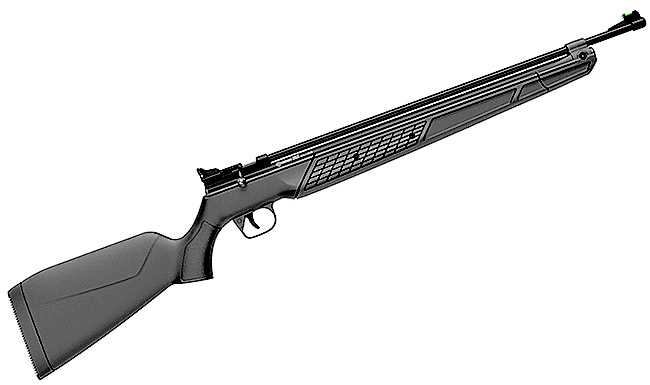 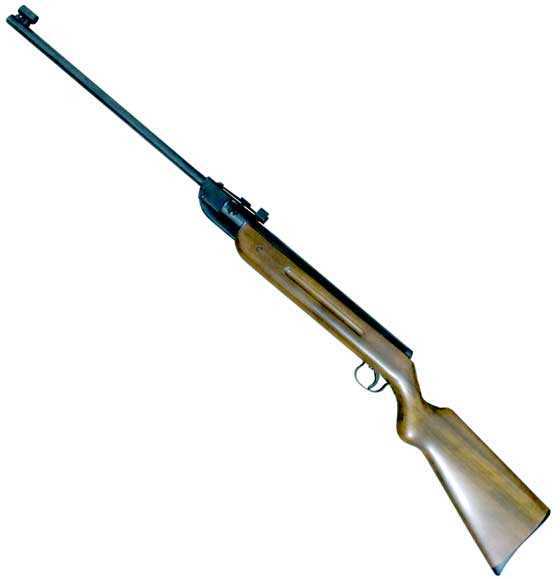