Before I begin today’s post, here’s an update on the Evanix AR6 pistol review I promised. Josh Ungier of Pyramyd Air told me yesterday that they sold out of the first pistols, so he ordered 100 more. He also said the grip will be smaller because the one on the first batch was quite large. He expects to receive those guns in a couple weeks, and I get the first one to test for you.

Now, for today. I was going to just shoot the .22 B40 for accuracy and let that be it, but one reader who seems to be a potential buyer has asked a lot of scope mounting questions. When I reviewed the past B40 posts, I saw that I glossed over that process. When you have the gun right there staring you in the face, it’s difficult to envision what it must be like for someone who has never seen it. I told him I’d do a special post about mounting a scope on this B40. Then, GadgetHead asked me about the sliding compression cylinder that drags on this rifle. I told him I thought it was a burr; but I said I’d lubricate it, and then we would know for sure. That turned out to be a good idea!

It’s a burr!
I cocked the rifle, which slid the compression chamber all the way to the rear. I used a Q-tip to spread Beeman M-2-M moly grease around the inside of the outer tube. With the rifle cocked, I could easily slide the chamber back and forth. I expected the lube to reduce the friction, but instead it acted like layout fluid, immediately revealing the presence of a definite burr. The dark gray grease was scraped away from just the place where the scratches are. Thanks, GadgetHead! Now I know how to fix it.

Scope stop holes
Okay, on to mounting a scope on the B40. Let’s look at the top of the receiver. At the rear of the 11mm dovetail grooves, there are three holes for a vertical scope stop pin to drop in. The stop pin is either located on the scope rings or it can be on a separate scope stop that goes behind the rear ring. The pin drops into whichever one of the three holes you select (I always use the rear one) and the pin is butted against the back of the hole. That way the scope mounts (rings) cannot move under recoil. 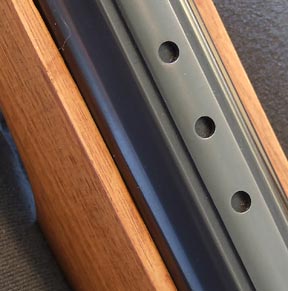 Use one of these three holes on top of the receiver to anchor the scope stop pin.

Scope stop
I used a separate scope stop because the 30mm rings I’m using don’t have a stop pin built in. The stop is mounted first on the receiver, and the pin is positioned at the back of the rear receiver hole. 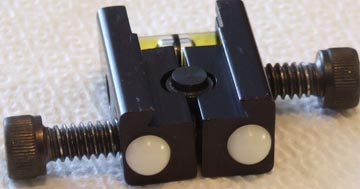 This scope stop has a pin that sticks down into one of the holes on the receiver. This is the underside of the stop. The two white things are synthetic bumpers to cushion the scope ring when it recoils into the stop. The yellow thing is a bubble level, but I don’t use it because it’s too close to my eye to see the bubble.

Mount the stop first
The scope stop is mounted first. It serves as the reference point for the rest of the work. 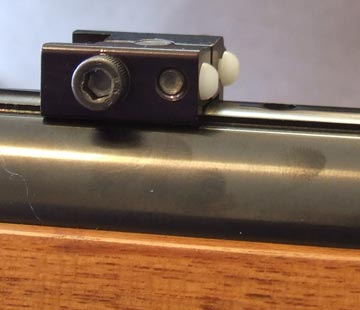 Position the scope stop with the pin at the rear of the preferred stop hole and tighten it. 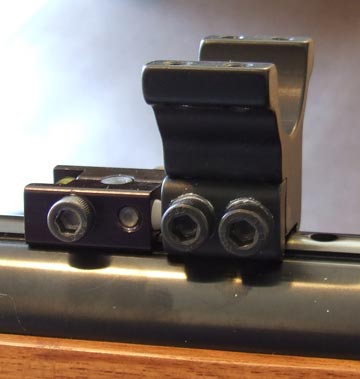 The rear ring is attached next. Back it up against the scope stop and tighten the screws.

Mount the rear ring
I’m using two-piece rings, so I mount the rear ring first. I slide it back and butt it against the scope stop. Even though you tighten the clamping screws, this ring will continue to slide back as the gun is fired until the synthetic cushions on the scope stop are flattened out. No amount of clamping pressure alone can keep the rings from sliding back on a recoiling rifle.

Tomorrow, I’ll finish this scope installation so we can move on to test accuracy.