Let’s over to the .22 caliber B40. The criteria are still the same. Just because the .177 performed so well doesn’t mean I will cut this rifle any slack.

B40s have an adjustable 2-stage trigger!
The owner’s manual was packed in the .22 box, so now I know how to adjust the trigger. I will cover that in a later segment, but trust me, the B40 does have a real 2-stage trigger. I know that because the trigger in the .22 came properly adjusted! That removes one of the harshest criticisms I had for the .177. Finally, I know how to make that trigger work as it should.

No need for duplication
The .22 B40 is essentially the same rifle as the .177 except for the caliber, so there’s no need to cover every point again. You can go back and look at the first report, Part 1, Part 2 and Part 3 if you want to know the basics. I’ll report differences as I see them. The trigger was the first; now, let’s talk about the stock. This one has less wood filler (but it still has some). It’s a lighter shade of Asian walnut and feels exactly the same as the .177.

Cocking
Cocking the .22 seems a trifle harder than the .177. It may just need a break-in, but there is more internal rubbing going on. When I looked inside the place where the chamber slides, it was immediately apparent what was happening. Part of the chamber is dragging inside the gun as it slides. This area can be lubed with moly grease to reduce the friction. When I initially closed the sliding chamber to fire, the ball detent that holds the underlever seemed very stiff. All it needed was to have a part screwed in tighter and everything went back to normal. Remember what I said about getting spring guns ready to shoot? Looks like I should take my own advice. 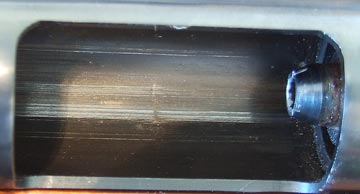 Linear scratches inside the outer tube indicate some rough spots on the sliding chamber. Lubrication or careful filing may eliminate the friction.

Shooting
The rifle shoots nearly the same as a .177 TX 200. There is no spring twang, but there is a bit more of a forward jolt. The silencer in the shrouded barrel is just as effective as the one in the smaller-caliber rifle. The pleasure of a positive two-stage trigger has me anticipating my trip to the range. I hope this rifle is just as good a shooter as the .177 turned out to be. There’s a small indication that it will be, because the rifle shoots like it’s been tuned!

Extreme consistency
I got the rifle out of the box and immediately went to the chronograph. That’s not a recommended way to do business with a spring-piston gun. You should allow it to break in with at least a few hundred shots before clocking anything, but I just couldn’t wait. Imagine my surprise when the numbers turned out so good that it looked like the gun had been custom tuned. Crosman Premiers averaged 701 f.p.s. with a high of 707 and a low of 697. That’s an extreme spread of just 10 f.p.s.! The muzzle energy for the average shot was 15.61 foot-pounds. I would expect that to improve with a break-in, because the .177 rifle hit a high of 16.34. You usually pick up 20 percent more power when you move up from .177 to .22. JSB Jumbo Exacts averaged 652 f.p.s., with a maximum spread of only 7 f.p.s.! That’s where regulated PCPs usually are! Energy for the 15.9-grain pellet was 15.01 foot-pounds.

I’m going to do three things to this rifle. First, I’ll adjust the trigger to just the way I like it. Second, I’ll lube the area where the sliding chamber drags to see if that can be reduced. Lastly, I’m going to mount a more powerful scope on this rifle than I used to test the .177. Since there is no TX 200 in .22 caliber to compare it to, I want to see everything this rifle has to offer. 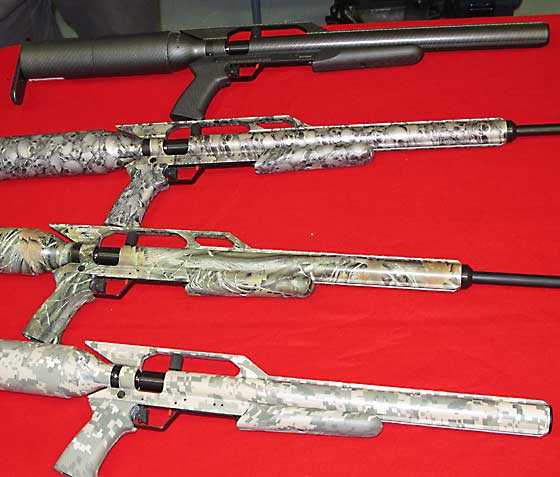 Take a rest! The value of good shooting rests 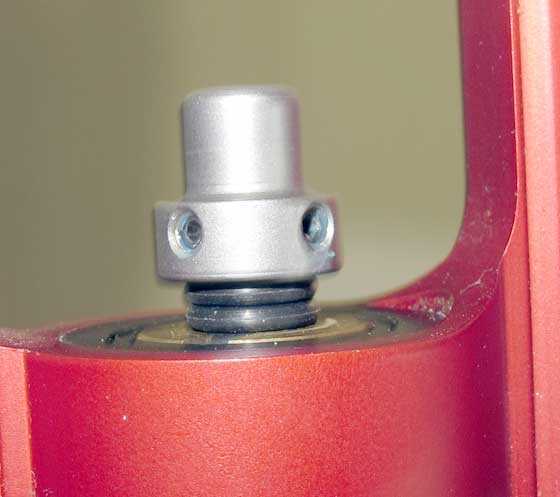