Well, there was a lot of interest in this gun, so I don’t mind showing it to you again so soon. Today, I’ll continue our walkaround introduction.

Interchangeable barrels
When I bought my Whiscombe, the fact that I could get barrels in every caliber was one of the factors that helped make the decision. I’m pretty careful with my money when it comes to expensive airguns, but the thought of having all four calibers in one air rifle seemed a bargain, even at the price I paid. Barrel changing is a short procedure, after which it is necessary to sight in the rifle again, despite the fact that the scope never moved. There is more to tell about these particular barrels, but I’ll save it for another day.

Transfer port limiters
A very funny thing happened when my new rifle arrived. It wasn’t funny at the time, but as soon as I knew what was going on it became laughable. I had ordered the JW75 because it was the most powerful breakbarrel rifle I could get. I had tried one of the fixed-barrel JW80s and found it to be difficult to load, so the breakbarrel feature seemed good to me. The difference in power between a 75 and an 80 isn’t much. The 75 will pull about 30 foot-pounds, while the 80 will go 32.

The barrel raises for loading. Note the bar under the barrel. It’s held in place by twin chisel detents that keep the barrel tight in place for zero air leakage and superior accuracy. This is why I know for a fact that a breakbarrel rifle can be just as accurate as a fixed barrel, because my rifle shoots like a PCP!

But when I tested my new rifle, it shot .22 caliber Crosman Premiers at an average of 577 f.p.s., which works out to 10.57 foot-pounds. I was shocked! Had Whiscombe misunderstood and built this gun to British specifications? I didn’t know at the time that the JW75 could never be built to UK specs. I called the U.S. dealer to inquire. He laughed when I told him the problem. It seems Whiscombe ships all guns with a 12 foot-pound transfer port limiter to keep the British government happy. They know the gun is capable of 30 foot-pounds and Whiscombe has the license to export guns they consider to be firearms, but the Home Office feels it’s best if the guns get shipped at the “legal” limit (please, lie to me!). All I had to do was remove the limiter and the gun would shoot at full power. I did, and the velocity of Premiers jumped to an average of 920 f.p.s., or 26.88 foot-pounds. 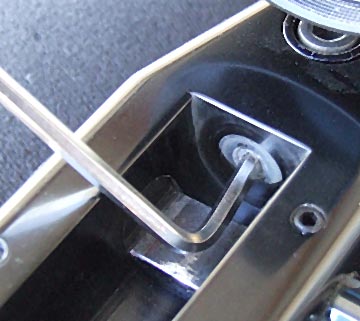 That hole in the receiver is the transfer port. That’s where the limiters go. The large flat lever at the bottom opens the barrel for loading. The two chisel detents that hold the barrel in place can also be seen, This rifle is built like an artillery piece! All the metal except for the detents is dark black, but the rifle is polished to a mirror finish.

John Whiscombe had included a number of transfer port limiters with the rifle so I could try it at different power levels if I wanted. Not only did I have a gun with four calibers, I also had the ability to run the spectrum of power levels, from next to nothing clear up to the rifle’s maximum. I hadn’t known about this feature when I ordered the rifle 10 months before. If I had, the decision to buy would have been a no-brainer. 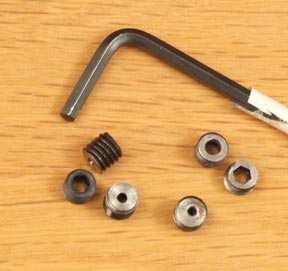 These Allen screws are the transfer port limiters. The one with the tiny hole at the bottom is the 12 foot-pound limiter that was in the gun when I got it. By removing all limiters and leaving the transfer port wide open, you get the maximum power the rifle can deliver.

We’re not finished with the introduction yet. There are still a few more surprises for next time. 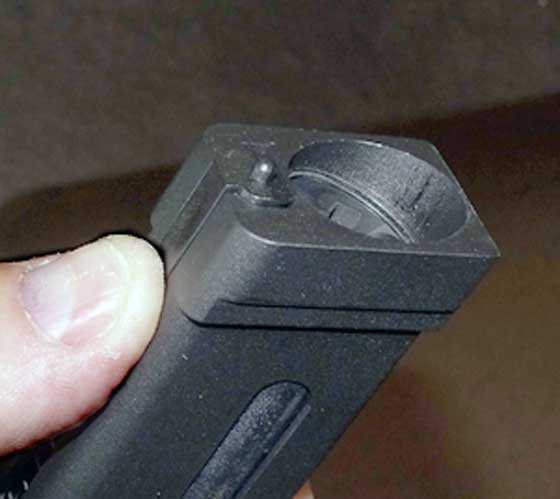