This posting was requested by a reader several months ago, and I think it’s timely now with Christmas approaching. People buying PCP guns for the first time are going to make the choice of whether to use a scuba tank or a hand pump to fill their guns, so the maintenance of scuba tanks should be of interest to many. In fact this information applies to all pressure vessels that have to be tested.

Controlled by DOT
Every country has a national agency that controls the use, transportation and maintenance of pressure vessels. Though the laws differ somewhat, they are all pretty similar because the concerns are always the same. In the United States, the Department of Transportation controls pressure vessels. They establish the regulations for their use, one of which is periodic pressure testing to determine if the vessel is still safe to fill. That test is done with water instead of air and is called a hydrostatic test. Water is much safer because it doesn’t compress; so, if there is a rupture, it doesn’t explode like pressurized air does.

Let’s look at a common 80 cubic-foot aluminum scuba tank. It needs a hydro every five years. The testing station has a test chamber, usually buried in the floor or behind massive blast walls. The tank’s valve is removed and a test fixture is screwed in its place. For the 80 cubic-foot aluminum tank, the test is to pressurize the tank to 5/3 of its standard operating maximum. Since 3,000 psi is the standard fill pressure, they pressurize it to 5,000 psi. But they use water, not air, so if there’s a failure, the explosion is relatively minor.

What are they looking for?
They’re not trying to blow up the tank. Instead, they measure the volumetric displacement of the tank when empty and again when pressurized to 5,000 psi to determine if the tank walls still have the required flexibility. After many pressurization/depressurization cycles, the tank walls become work-hardened and are no longer safe. That tank will fail, and failure means it can no longer be filled. No dive shop will fill a failed tank.

How do pressure vessels fail?
I talked to the test engineer at a test station, and he told me a failure during test was rare. I don’t mean a tank that fails to pass the test, I mean one that actually ruptures during testing. The most common failure point are the valve screw threads. They strip out under pressure, and the test rig is blown out. The second most common failure point is the base of the tank. When the tank is stored standing up, water (from condensation inside the tank) runs down to the base and promotes corrosion. Aluminum doesn’t exactly rust in the conventional sense, but it will corrode under the right conditions. These failures are rare, but not unknown. However, a tank that bursts on the side is almost unheard of, though I’m sure it does happen with all the tank testing that occurs.

Tank markings
The top portion of a tank is covered with markings stamped into the metal. Among them are the type of tank, the manufacturer, the max working pressure, the serial number and the dates of all the hydrostatic tests. 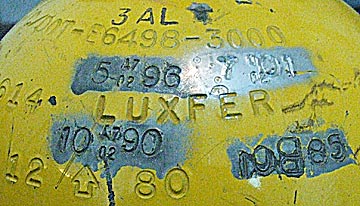 Lots of information on this old tank. It was made and first tested in December 1980. You can read the other dates clearly. This is an aluminum 3000 psi tank, which you can also read, along with the manufacturer.
A dive shop will send your tank to the test station for you, and the fee is usually $25-35, depending on the location. Or, you can take it there yourself and save a little money. Without a current hydro stamp on the tank (within the last five years) no dive shop will fill the tank.

I hope this posting answers all the questions about hydrostatic testing. If not, you know where the find me!

18 thoughts on “Hydrostatic testing of pressure vessels, including scuba tanks”