Well, we looked over the bulk-fill Drozd in Part 1. We saw all the controls and took the weight and measurements, so we got to know the gun pretty well. Today, we’re going to start shooting for record.

Should you shoot steel BBs?
I made a point of telling you to shoot lead balls in the first report on the gun, back in August 2005. Since then, I have received numerous comments telling me why I was wrong to say that. The manufacturer packs steel BBs in the box with the gun, EAA (the importer) says to use steel BBs and many owners say lead balls have jammed their guns. So, am I willing to admit I was wrong? Not on your life!

So, being the stubborn cuss that I am, I tested the velocity of this gun with three different types of ammo this time: conventional steel BBs, 4.4mm lead balls and 4.5mm lead balls. It fed all three without a hitch, but I’m not claiming anything because of that. I fired only a handful of rounds, while I am informed that a Canadian club has some guns they have shot as many as 100K times! I can’t begin to compete with that. They shoot only steel, and they say that an IZH factory representative told them steel BBs are the right ammo.

Loading
Loading the bulk-fill Drozd requires removal of the magazine. However, on that model, the magazine is free of the gun ONLY; it’s still tethered to the CO2 tank by the hose. When you want to load, find a place to lay the gun close by. To load, pull down the spring-loaded follower. On this magazine, there’s no way to lock it in place, so one hand has to hold the follower all the time. Therefore, you’ll want to locate the ammo in such a position that your other hand can do all the work. 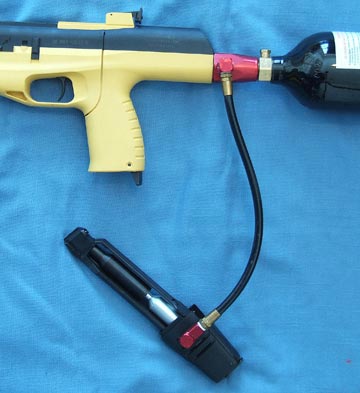 When the magazine is free of the gun, it’s still tethered to the CO2 tank. This is on the bulk-fill gun, only.

Load one at a time by dropping them into the one hole at the top of the magazine. The hole is large enough, but BBs or round balls will go everywhere if they don’t make it in the hole, so I advise putting a cloth under the magazine to stop the strays from rolling away.

Inserting the magazine back into the gun seems to require a knack on my gun. I don’t know whether this is normal or if it’s caused by the springiness of the gas hose, but the magazine kept trying to go too far to the front of the magazine well and would not seat properly. The solution turned out to be to force it to the rear of the mag well while inserting it. Then, it went in without a hitch.

Performance with steel BBs
The temperature was 61 degrees. I used Daisy Premium Grade BBs, which weigh 5.1 grains. They averaged 535 f.p.s., with a spread from 526 to 541. The muzzle energy for the average velocity is 3.24 foot-pounds. The very first shot was a low 481, but no other shot came close to that so I threw out that result. It seems you have to “wake up” the valve when shooting this gun the first time. That’s common for both CO2 and pneumatic airguns.

We’ll finish this test on Monday.