I’ve grouped pneumatics and CO2 guns together, because they both operate with compressed gas. Therefore, the recoil behavior is the same for both.

They DO recoil!
Make no mistake, all pneumatic and CO2 guns recoil. But, they recoil so little that it’s easier to say they have no recoil to speak of. Compared to a recoiling spring gun, that’s true. When a pellet takes off under the pressure of gas behind it, the rifle moves in the opposite direction. The weight of the moving pellet determines the force of the shove imparted to the rifle or pistol. That’s why the recoil is so light. An 8-grain pellet cannot affect a 40,000-grain air rifle very much. When you get into an air pistol you do start to notice the push.

As the projectile weight increases, so does the recoil
How many times have I read an article in a gun magazine describing a vintage big bore air rifle, where the author says there is no recoil and no sound? It’s obvious to me those writers have spent more time behind the Smith-Corona than the Smith & Wesson! Big bore airguns do kick and some of them hick hard enough to hurt! I remember shooting an 8.5-lb. 118 caliber dart gun called the Mag Air 1180, which shot 550-grain mild steel darts. It was for hunting big game, such as mountain lions and elk, and it kicked about as hard as a .30/06, which is to say…a lot! 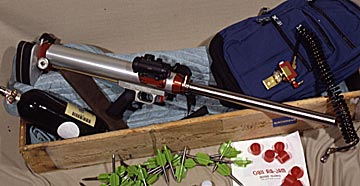 But the biggest kicker I ever saw was a CO2 gun called CO2Much. That was a 14.5-lb. monster that shot a 7-oz. lead slug. It generated over 1,000 foot-pounds, and the recoil was at least as bad as a lightweight .375 H&H Magnum, if not a .458 Winchester. It moved the seated shooter’s shoulder backwards a foot or more, even with the gun mounted on a bipod.

Is recoil a problem for gas guns?
Recoil isn’t a problem for sporters and hunting guns. And, if the power is low, it’s very difficult to feel the recoil anyway. In 10-meter target guns, recoil is a problem, and the top makers, e.g. Steyr and Feinwerkbau, have done something about it. Just as some “recoilless” spring guns use a counterweight to offset the momentum of the piston, the top target guns use a very small weight to offset the push that comes when the gun fires. This weight is also powered by air and moves backward to counter the pellet going forward. It works so well that when you fire a gun that has it, the only way you can tell that the gun fired is by the noise. You feel no impulse.

This system is balanced very close and is one of the maintenance items on guns so equipped. Tiny particles of lead will get blown into the channel where the weight moves and eventually gum it up, so these guns have to be cleaned more often than regular PCPs that don’t have the mechanism. For shooters who aren’t world-ranked, it may be more trouble than it’s worth; but it comes standard on guns such as the FWB P700, so you get it whether you want it or not.

Powerful smallbores recoil noticeably
When you fire really powerful PCP rifles, such as the AR6 Hunting Master and the Condor, you’ll notice a kick. It’s about the same as the recoil seen in a heavy .22 rimfire rifle, but the impulse lasts longer. Since nobody shoots field target with these rifles, the push isn’t a problem. They have more than enough accuracy for hunting, but follow-through after the shot is fired is the right way to deal with recoil, no matter where it comes from.

So, all airguns recoil. Until someone invents a rail gun that shoots pellets, I suppose it will stay that way.