Before we get started on today’s blog, I wanted to let you know that Pyramyd Air’s latest email newsletter is out. It’s all about the special promotions and giveaways from Crosman and Gamo.

B.B. let me have the blog again today, to finish the discussion I started on Monday. When we left off, I had just explained how to test your AirForce Condor to determine the correct fill pressure. We had a lot of phone calls about this issue at AirForce, but eventually the word got out.

It took several months to calm things down, but no sooner had we done that than the “inventors” went to work. One gentleman, who called himself Mr. Condor on the forums, installed an overweight hammer in his new rifle and proceeded to pound his rifle to pieces. He was giving lots of advice about how other owners could get more out of their rifles right up to the day he walked into our shop with his brown paper bag full of damaged Condor parts. I had to assemble it for him and install several new parts because that 6-month old airgun was all beat up. He paid for the work because he had disassembled the gun and voided the lifetime warranty, but he seemed to be happy.

Two weeks later, he was back in our shop – this time with his air tank that wasn’t working. You could see that the top hat was mashed down flush with the top of the valve and had no more resiliency.

When I disassembled it, I found the valve had been destroyed by the repeated impact of an overly heavy hammer – just what Mr. Condor was telling everyone on the forums they should do to their rifles. I saved the guts from that ruined valve so I could share it with other airgunners as an example of what not to do! 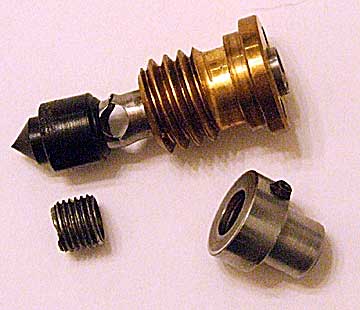 This is what can happen when you take advice from the airgun chat forums. This is all supposed to be one single valve assembly, and the threaded portion is supposed to be attached to the valve stem stub sticking out of the brass insert. Notice the crushed stainless steel valve stem around the air hole.

Mr. Condor wasn’t alone in ruining Condors, of course. He was just one of the ones who stood out by ruining his gun so quickly and completely. I remember another experimenter who wanted to shoot as fast as possible, so he cut a hole in his air tank and threaded the hole to accept a hose fitting from a helium tank. He then ran the gun on helium. He claimed he was shooting .22 caliber JSB Exact pellets at 1,500+ f.p.s. and that he was getting super groups at 200 yards.

Even if any of that were true, he still voided the warranty on his gun, subjected himself to unknown danger by putting a hole in the air tank and wound up with an airgun that had to be tethered to a helium tank! I don’t know about you, but that’s not why I got into airgunning. If you’re going for the airgun land speed record, there are several testbed airguns owned by NASA that are used to simulate micrometeor strikes on space vehicles. They shoot into a vacuum, as I understand it, and achieve velocities above 5,000 f.p.s.

As for me, I like shooting quiet, accurate guns.