Mendoza RM-650 BB gun Another one to love!

Mendoza’s RM-650 is a classic-looking BB gun with some traditional touches that I like.

I have recently discovered that Mendoza produces some pretty fine airguns. The RM-200 test has really opened my eyes, and today I have another super Mendoza gun for you – the RM-650 BB gun.

Why do I like it?
I like traditional guns, by which I mean guns that do not depart from classic lines and even traditional materials. I guess I make some exceptions for guns like those made by AirForce, but I am a traditionalist at heart. This Mendoza BB gun is made along more traditional lines like the Daisy Red Ryder. It’s profile doesn’t look as classic as the Red Ryder’s, and the automatic safety atop the receiver is a turnoff, but on the other hand I have never forgiven Daisy for changing the front of the model 1938 to make the BB loader a plastic mechanism.

Loading
The Mendoza uses a more classic loading system dating back many decades. It’s no better than the Red Ryder’s, and you might even argue that the Mendoza is harder to load because the hole you pour up to 500 BBs into is smaller, but I just like it. With the Mendoza, a turn of the knurled muzzle exposes the loading port underneath the barrel. It’s what I grew up with in the 1960s, and I just like it.

The loading port is under the barrel. Rotate the knurled muzzle to open the port.

Cocking
Unfortunately, the RM-650 has a plastic lever just like the Daisy. But that is the only plastic piece on the outside of the gun. Even the automatic safety slide atop the receiver is metal. When the gun is cocked, the safety slides back automatically, putting the gun on safe until the shooter takes it off deliberately. The location of the slide makes it easy to take off the safety. You can do it with your cocking hand when you return the lever to the stored position. 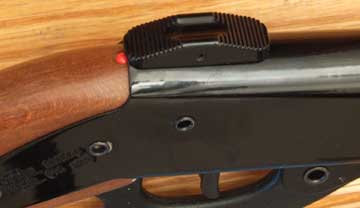 The automatic safety goes on every time you cock the gun. It gives an odd hump to the top of what is otherwise a traditional-looking BB gun.

Overall quality
The Mendoza is not a copy of the Daisy, though it shares many of the styling lines. And, there are construction differences. The largest is that this gun has only one visible screw – the one holding the forearm. The metal action is entirely riveted together! Now, that’s going to make the RM-650 more difficult to repair down the road, but I have never worn out a BB gun. I know the Army repaired their Daisy Quick Kill guns a lot, but each one of those was shot millions of times, and they were used by thousands of trainees. I think it’s very unlikely that one person or even three can wear out a BB gun that’s well cared for.

The stock and forearm are wood, which most BB-gunners like. The metal is mostly finished with a tough, uniform coat of paint that exhibits a very high gloss. A few smaller parts like the rear sight and trigger have been given a black oxide finish that leaves them dull in comparison. Overall, this is a very nicely finished BB gun.

Shooting
Daisy Premium Zinc-Plated BBs registered between 276 and 280 f.p.s., which is on a par with the Red Ryder. The trigger is single-stage and stiff, like all BB gun triggers. It pulls off at 44 oz., which is 4 oz. under 3 lbs. That’s pretty good.

As far as accuracy goes, I must confess I’m not much of a BB gun shooter. Except for the exceptionally accurate Daisy Avanti Champion 499, most BB guns have lousy accuracy. When I tested the Marksman 1010, I did measure a 10-foot shot group for you, so I shot the RM-650 at 15 feet – a good BB gun distance. I got a 2.7″ group, of which I was responsible for about a quarter-inch. I would expect the same performance from a Red Ryder.

The rear sight is adjustable for elevation only, using the traditional stepped ladder type of adjustment. For windage corrections, you need to learn the aim-off for your gun, which is no different than other BB guns for the past century.

Bottom line
I guess I just like the whole Mendoza line, which transfers to this BB gun. I like that they finish their guns so well. I like the shot groups that come with each rifle. I like the oil hole they put in the outer tube of the spring piston rifles and the super-fine rear peep sight that I have yet to review for you. Like most pure BB guns, the RM-650 isn’t a standout on its own, except that it includes many of the extra little details such as the all-metal construction and nice finish. Pyramyd Air will soon carry these, so next Christmas there will be a choice among BB guns.

An aside
Yesterday’s post received a number of interesting comments, plus at least one request for another posting on reticles. It seems that we’re all interested in the technology of scopes. I also can see from the comments that there are number of readers who know a lot more about this subject than I do. I rely on some industry contacts, but my knowledge is pretty thin when it comes to optics. So, you can help me by making comments like those made yesterday. Please tell me what you’re interested in. 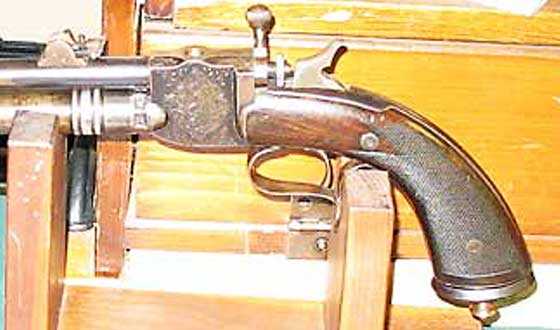 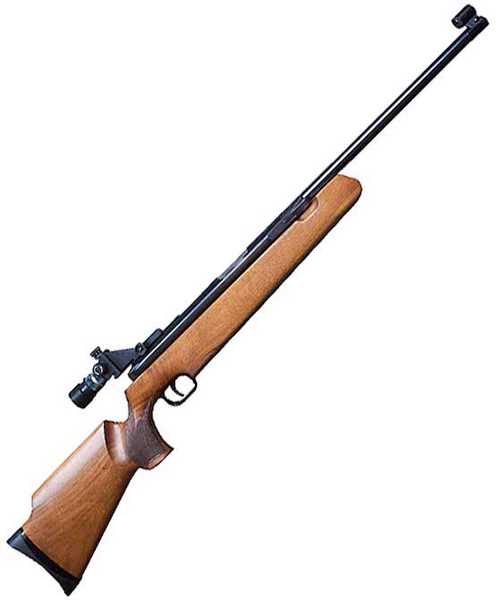 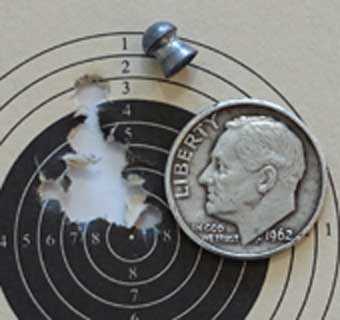