I had every intention of finishing the CP99 Limited Edition today, but something happened in testing that has never happened before. I want to report it completely today, so there’s going to be a part three for this gun!

For all shooting, I paused a minimum of 15 seconds between shots. There’s no sense shooting any faster than that, because CO2 will always cool down a gun and lower the velocity. You have to allow time for the gun to return to normal after every shot. The temperature when I shot (indoors) was 71 degrees F.

Shooting single-action
Just because there’s no hammer visible doesn’t mean you can’t cock it. Pull on the back half of the top slide; and when the silver metal underneath is completely exposed, the hammer will cock. You will see the trigger move as this is done. 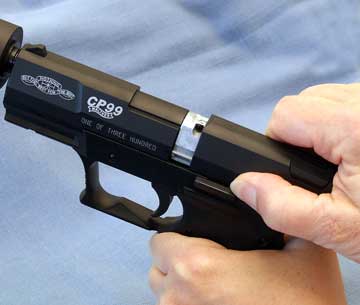 Just pull back the slide to cock the gun.

Surprise!
Then I attached the compensator, because several people wanted to know how it affects accuracy and velocity. As I was getting ready to shoot, I was already drafting in my head how to explain why a fake compensator cannot possibly add anything to the velocity of a pistol like this, and then I took the first shot – 365 f.p.s.! Okay, I thought, that must have been an anomaly. Shot two – 365! Shot three – 364. And so on. With the comp, it didn’t see to make a difference whether I shot single- or double-action. So the CP99 shoots Crosman wadcutters faster with a compensator installed than without it. Very interesting!

Last pellet
Beeman Lasers were the final pellets I tested. Without the compensator, they averaged 378 f.p.s. in double-action and 380 in single. That’s too close to say there’s a difference. When the compensator was installed, the velocity jumped to 385 single-action and 389 double. Only a small increase with this pellet.

Number of shots per CO2 cartridge
Everybody wants to know this! On the first cartridge, there were 42 good shots in a tight spread. Then velocity started tapering off. By shot 55, it had dropped to 289 f.p.s. with a Beeman Laser, which you would probably notice. It really depends how far you are shooting when you notice the power dropoff. Shots at 25 feet might not move too much as the velocity declines, but at 25 yards they certainly would. Figure 50 good shots per cartridge. The second cartridge performed exactly the same as the first.

The fastest recorded shot was a Laser in double-action with the compensator installed. It measured 397 f.p.s. The fastest without the comp was also a Laser shot in single-action. It measured 385 f.p.s.

So it seems there is something to this compensator, after all. I note that it improved the performance of Crosmans more than the other two, so there must be something like the weight of the pellet to consider, as well.

I had planned to look at the laser and do accuracy testing today, but the time spent chronographing the gun proved to be excessive. Also, there was a lot to explain. We’ll do the laser and accuracy next, plus one reader wants me to tape up the compensator holes to see if there’s a noise difference.