Well, Part 2 of the Remington Genesis report was completed on June 19, 2006, so this report has been some time in coming. I’d like to tell you I have been diligently shooting the gun all that time, but the truth is – I completely forgot about it! Several readers reminded me during that time, but it didn’t sink in until a couple of weeks ago.

Clean the barrel
I read both earlier posts to see what I’d done already, and it turned out I hadn’t cleaned the barrel yet, so that was the first order of business. I was surprised by how light the cocking effort is and how smooth the rifle cocks now that it’s broken in. Remember that I complained about spring noise when cocking back when the gun was new? Well, it’s all gone now, and the rifle cocks very smoothly.

The barrel on this rifle was the easiest I’ve ever cleaned, which stood in sharp contrast to the Mendoza RM 2000 I recently cleaned. By stroke five, the brush was going back and forth with a light push, and by the end there was hardly any resistance at all. I could feel the rifling by holding the Dewey rod by the shank instead of the swivel handle. The lands bumped as the bristles bounced over them.

Change the scope
I changed the scope, just in case that was the problem that kept the rifle from grouping last year. This time, I went with a Leapers Bug Buster 2, which has less power than the variable scope that comes with the Genesis. Instead of using the scope-stop hole on top of the receiver, I just butted the back of the rear scope ring against the plastic end cap of the rifle. It seemed to work fine and the scope didn’t move.

The wind was brisk, so I held the distance to just 25 yards

Find new pellets
In the last report I eliminated JSB Exact heavies and Crosman Premier heavies as possible pellets, so I looked at all new pellets for this time. On the advice of one of our readers, the first pellet I tried was the Eun Jin 16.1-grain extra heavy pellet. It grouped in 2.5″ and was a total bust. After that, I tried Beeman Kodiaks and got pretty much the same large dispersion.

Logun Penetrators tightened things up to 1.5″, but at 25 yards that’s still not very good. Then, I tried some Gamo Tomahawks on the recommendation of another reader. Lo and behold, they turned out to be good pellets for this rifle! They were landing in the same holes or close to them, shot after shot. But the group size for five shots was still about 1″. While that’s okay, it’s not great for 25 yards. But, it gave me a thought.

I pulled the Gel Shooting Support pad out of my range bag and put it on top of the sandbag in place of my left hand. The Genesis stock has a flat spot just forward of the triggerguard, and balancing that on the gel bag produced the perfect hold. The groups shrank to LESS than a half-inch! Now we’re cookin’! 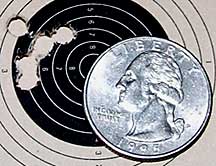 Gamo Tomahawk pellets made some impressive groups! This one measures 0.43″.

The next pellet I tried was the RWS Supermag. While four pellets grouped in a neat half-inch in the best group fired, the last one opened the group to 0.906. It was always that way, too. They seemed to want to group, only to mess up with one pellet. 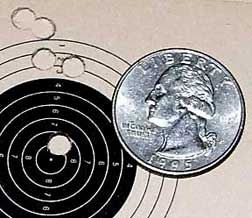 RWS Supermags wanted to be good, but there was always a stray pellet.

I’ll finish this report on Tuesday, because on Monday I hope to start the CX-4 test (if the gun arrives, that is).