Many of you have remarked that you have wanted me to report about the new Air Arms S410 sidelever. Several owners say it’s the greatest air rifle they’ve ever owned. Accuracy is supposed to be quite good. Others are looking to buy one and want a bit more information before they make the purchase. So, today we’ll begin that look – and it will be a looonnng look! I will break it up with other stuff so I don’t bore anybody who isn’t interested.

And just so you know, I will not duplicate the excellent pictures Pyramyd Air has for this rifle. If you haven’t seen them, take a look now.

Cock the S410 sidelever with your pinkie!
This is a 10-shot repeating precharged air rifle. The one Pyramyd Air sent to me is in .22 caliber. The sidelever replaces the bolt, making cocking easier. Air Arms told Pyramyd Air at the last SHOT Show that they will be doing more sidelevers in the future, so this one is the wave of what’s to come.

Power adjustment is a breeze
A small knurled silver knob on the right side of the receiver adjusts the power. When I first saw it, I thought it couldn’t work. I ‘m used to rifles like the Career III 707 and the AirForce Condor, whose power adjustment knobs require a lot of force. This one is more like tuning a radio – if radios tuned with knobs anymore, that is. A silver indicator on the other side of the receiver tells you the direction your adjustment went. There are no numbers to confuse – just a plus and a minus for owners to understand what they’re doing.

Fill adapter – prepare to be amazed!
This rifle has the most unusual fill adapter I have ever seen. It looks like an engineer went to a lot of trouble to design a complex part that no one could easily copy. And it also looks like it takes a CNC machining center to make it! I have asked Air Arms to explain the reason for this odd coupling, but I’m telling you right now, if you buy this rifle you better have a female 1/8″ BSPP connector on the end of whatever hose you use to fill PCPs, because that’s what this thing fits. It doesn’t matter whether you have a pump, scuba tank or air compressor – the hose has to end in a female 1/8″ BSPP connection to fit this adapter. 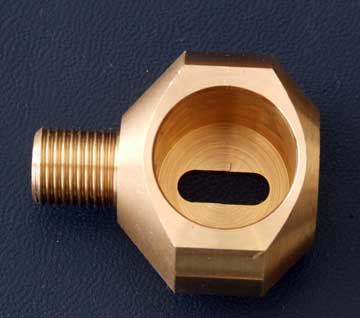 This is the fill adapter. Nothing else will work. The threads are 1/8″ BSPP, so get the right hose coupling!

Read the manual!
One look at that fill adapter and I immediately opened the owner’s manual and read the entire thing.

The rifle’s first fill
Well, right off I found some wording in the manual that should be revised. It says to “…hold the female part of the connector (the fill adapter) in the following fashion….” when what they are trying to say is to lock the fill adapter in place by rotating it 90 degrees to the keyed hole in the adapter. I didn’t do that the first time and the adapter blew off the rifle. A little surprising but no harm because it was tethered to the fill hose. What they don’t mention is you are to look at the photo in the manual, not read the text. So I am showing you what to do here. This same fill coupling is now used on all new Air Arms guns. 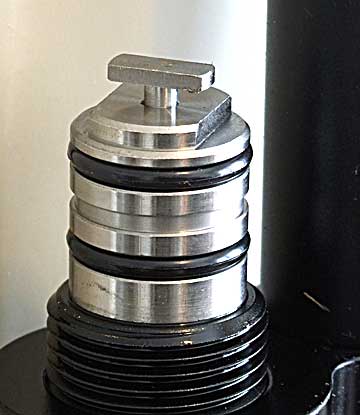 This is the gun fill port. Pay attention to the “propeller” on top. It is the adapter locking key. 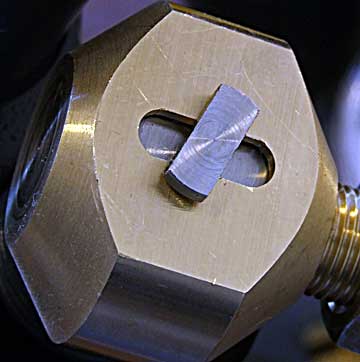 See how the key fits through the hole on the adapter top and twists sideways. You must do this to lock the adapter to the rifle while filling.

Quiet operation!
Once it’s filled, you know I’m going to shoot it. Especially since there is a full barrel shroud, and the reports I’ve read says it works. Bottom line – it shoots with very little noise. How little? Well, on low power it sounds like a Red Ryder BB gun. On medium to high power it’s getting up to the level of an RWS Diana 48, which is to say noticeable if you are within 50 feet and you know there’s someone in the area with an airgun. That’s impressive!

10-shot magazine means lots of shooting
The magazine comes out of the left side of the receiver, and the owner’s manual has some very specific instructions for how to remove and install it. Loading is simply rotating the cylinder until a chamber aligns with the loading hole, then dropping in a pellet. Once the magazine is installed there is no warning that it’s empty, other than looking through the transparent plastic as you shoot the rifle. But you can tell a difference in the muzzle report when no pellet has fired.

10-shot magazine is easy to load.

In the next report, I’ll try to finish the physical examination and take you through mounting a scope.