Crosman’s Challenger 2000 is a 10-meter target rifle that’s also perfect for indoor shooting when the weather turns cold. Adult size and adjustability make it a favorite.

As the season turns to autumn and outdoor temperatures start dropping, U.S. airgunners start moving indoors (everyone in Hawaii say, “Huh?”). When this happens, our shooting tastes turn more toward paper-punching and the 10-meter sports, so today I’d like to look at a rifle that may be ideal for such activity. If it isn’t ideal, then it’s pretty darn close. I’m talking about Crosman’s Challenger 2000 10-meter rifle.

Pyramyd Air’s special Challenger sale
To kick things off for the fall shooting season, Pyramyd Air has put together a special package of the rifle, Crosman Competition Wadcutter pellets and a Pyramyd Air Gel Shooting Support. The rifle and pellets are obvious, but they threw in the gel pad because it is such a pleasure to rest a rifle on when shooting.

The basics about the rifle
The Challenger 2000 is a single-shot, .177-caliber CO2 pellet rifle set up for target work. It uses standard 12-gram CO2 cartridges, and when I tested it, I got up to 75 shots per cartridge. I say “up to” because a lot depends on whether you are shooting a formal match or just shooting for fun. If the latter, you don’t really care if the velocity drops a bit, as long as you can still hit a dime-sized target at 10 meters. If the former, you want every shot to hit the period at the end of this sentence. I would stop shooting at shot 50 and change cartridges in that case.

The competition is stiff, but not unbeatable
While you can compare this rifle to any and all others, there is one that sticks out as its major competitor – Daisy’s Avanti 853. When the Challenger 2000 first hit the market in the year 2000, the 853 had already been in production for almost two decades. It was firmly entrenched in the market as the rifle of choice for NRA Sporter-class competition (a class of 10-meter competition for juniors that mandates a lower-cost target rifle. The Challenger went head-to-head with the Daisy and didn’t succeed in dislodging it. Today, you’ll see very few Challenger 2000s on the line at events higher than the local level.

Coaches conducted tests and found that the Crosman wasn’t as inherently accurate as the Daisy, with its Lothar Walther barrel. The difference was slight, but in competition, every little bit counts. The difference isn’t as great as four-hundredths of an inch, but in the crowd that shoots targets, that matters. So the Challenger wasn’t as popular as the 853, even though it does have some very real advantages.

The Challenger has several real benefits over the Daisy!
When the Challenger 2000 first came out, I tested it and found some features that Daisy would do well to emulate. The first is cocking. The Challenger 2000 cocks like a dream. Just pull straight back on the ambidextrous T-bar bolt handle, and the gun cocks with about 2.5 lbs. of effort. The 853 cocks on the right side of the gun and can take over 10 lbs. of stiff, jerky movement to cock. Once cocked, the Crosman is ready to be loaded and fired, while the single-stroke Daisy still has to be pumped. The pump requires at least 20 lbs. of effort and is too hard for younger kids. And, this ease of cocking also means the Crosman is a delight to cock when in the prone position – the bane of Daisy 853 shooters. If pumping is difficult when you’re standing, it’s almost impossible when you’re lying on the floor.

Another great benefit the Crosman has is its trigger. It breaks cleanly at 2.5 lbs., while the Daisy has a rough, gritty 4+ lb. release. It’s possible to gunsmith the 853 trigger down lighter and smoother, but never to the level the Crosman achieves right out of the box.

Finally, the Challenger 2000 stock is very adjustable, both for pull length and for cheek height. It can easily be adjusted to fit a large adult, which is why adults are among the largest segment of buyers. It seems to fill a need for a basement plinker/target gun. The loaded and charged weight of nearly 7 lbs. is also pleasing to adults.

An accessory rail you won’t find on the Daisy
Under the forearm is a standard accessory rail – something the Daisy 853 must do without because of the presence of its pump lever. The rail makes it easy to install accessories like target slings (they only attach at the front of the rifle) and hand stops.

The right sights are already on the Crosman
Crosman wisely decided to install a precision diopter rear sight, while Daisy put on a lesser plastic sight, believing that shooters would probably upgrade. They do, and that narrows the true cost of the Daisy to within a few dollars of the Challenger 2000. The front globe accepts inserts and comes with a 4.1mm ring front insert installed. No additional inserts come with the rifle. The rear sight can be removed and a short dot sight or even a very short scope can be mounted to the 11mm rail.

Velocity is driven by the pellet you select
I tested the rifle with 7.9-grain Crosman Competition Wadcutter pellets and with 7.6-grain Chinese wadcutters. With Crosman pellets, it averaged 495 f.p.s., with a spread from 485 to 503 f.p.s. With Chinese pellets, the average was 513 f.p.s. with a low of 504 and a high of 520 f.p.s. With this lighter pellet, the gun shot over 500 f.p.s. for 58 consecutive shots.

Accuracy – the most important factor
The rifle I tested came with a test target showing good accuracy. The group measures 0.121″ for five shots, and you know they used Crosman Competition Wadcutters. An Olympic-grade target gun would shoot a group around 0.040″-0.060″ and a Daisy 853 would group around 0.080″-0.10″, so the difference isn’t very much. 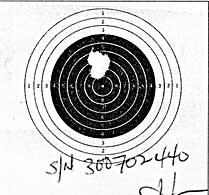 The Crosman Challenger 2000 is a delightful 10-meter target rifle that crosses over to become a great little plinker. Let the sale at Pyramyd Air be your incentive if you already have this rifle on your list. If it’s not on your short list, maybe this would be a good time to add it.

24 thoughts on “Crosman Challenger 2000 Pyramyd Air has a sale!”