Today’s post is a light and easy one for me. It addresses a question from reader Stabbs about the good and bad points of the three types of spring-piston cocking mechanisms.

Breakbarrels – the good points
Breakbarrels are the most common type of spring-piston air gun. They use the barrel as a lever to cock the powerful mainspring. Because the breech is exposed when they break open, they are the easiest of all airguns to load – both rifle and pistol. They can also be lighter weight than the underlever or sidelever guns because they don’t need a separate cocking mechanism. When it comes time to take them apart, breakbarrels are simpler mechanisms, so they’re easier to repair, though they do vary in complexity by brand and model. And, finally, a breakbarrel is quite easy to clean because of the good access to the barrel.

Breakbarrels – the bad points
Breakbarrels always require the most technique to shoot accurately. They are hold-sensitive, and although this differs by model, I can say universally that all breakbarrels are more difficult to shoot accurately than any sidelever or underlever. Breakbarrels usually have barrel “droop,” which means the barrel points downward. Used with open sight, this hardly matters, as both the front and rear sights are mounted on the barrel, but when you scope the gun it becomes a problem. Also, when selecting a scope, you have to be careful that the scope isn’t so long that it interferes with the barrel being broken open.

Breakbarrels – some interesting things
Some new shooters seem driven to experiment with their breakbarrel by pulling the trigger when the barrel is broken open. If the gun shoots (a lot of them won’t), the barrel snaps shut, bending the barrel upwards and often cracking the stock. This is guaranteed to bend the barrel of the rifle or pistol every time, so be warned. And, dealers have learned to spot this kind of abuse, so they usually don’t honor the warranty when they see this.

Some shooters avoid breakbarrels because they believe the barrel has to bend over time by cocking the rifle. That’s not true. They are 100 year-old breakbarrels that are just as straight as the day they were made. Barrels can easily be bent through abuse, but they never bend in normal use.

Sidelevers – the good points
Sidelevers have a separate cocking lever on the side of the gun. They have a fixed barrel that many feel is more accurate than a breakbarrel. Although it isn’t, it’s easier to shoot a sidelever more accurately because they’re less sensitive to handling. So I guess it’s true that a sidelever will be more accurate than a breakbarrel in most shooters’ hands. Just watch out for the man who has learned the right technique with his breakbarrel! Sidelevers can also accept longer scopes because the barrel doesn’t tip up and get in the way.

Sidelevers – the bad points
Sidelevers tend to torque (twist) to the right when they shoot. The sidelever unbalances them to the right (because the lever is on the right side for right-handed shooters) anyway, and when the mainspring decompresses, it twists violently in that direction. The also have sliding compression chambers that can amputate fingertips if the sear releases while the gun is being loaded. That was a big problem with the original Chinese TS45 sidelever before the design was revised. Diana sidelevers have always had those safety features, so they’re not a danger. Sidelevers can droop as much as breakbarrels, though the tendency is not to. And, finally, sidelevers have to include the weight of the extra lever, so they’re usually heavier than breakbarrels, if the breakbarrels were made to be light.

Underlevers – the good points
Underlevers tend to be the easiest of all spring guns to shoot accurately. The Whiscombe, TX200 Mk III and both the HW77 and HW97 are underlevers with legendary accuracy. Unlike sidelevers, underlevers have no pronounced torque when they shoot. That’s because the extra weight of the rifle hangs straight below the barrel as a counterweight. But, underlevers have the same sliding compression chamber with the same safety features as sidelevers, so long scopes are easier to mount.

Underlevers – the bad points
The sliding compression chamber is a safety risk, though all underlevers sold in the U.S. today have the proper safety features to prevent accidents. But older rifles such as the Chinese B3 are very accident prone. Like sidelevers, underlevers are heavier because of the lever and attaching mechanisms. Underlevers are particularly difficult to mount slings because the underlever tends to pop away under pressure.

Well, there you are. Perhaps you readers can add to these lists of good and bad points for me? 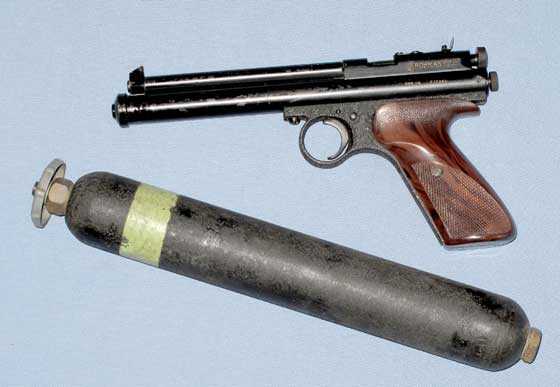 Fred does some accuracy testing