Today, I’ll test the accuracy of the .177-caliber Gamo Whisper with a gas spring conversion. Before we do, though, there are a couple of things to clarify. I said in the last report that the piston was replaced with the gas spring conversion, but that’s not the case. The original piston stays in the gun. Also, Pyramyd Air has worked out a deal with Gamo that the original warranty remains with the gas-spring rifles.

Please remember that this rifle now has the GRT III trigger from Charlie da Tuna, so the trigger-pull is greatly enhanced. It also has the Gamo scope that comes with the rifle. It’s not clear at the 25-yard range I’m shooting.

On with the test!
I moved outdoors for this test so I could shoot at 25 yards. That was the range at which I tested the original rifle in Part 5. Only, on this day, there was a stiff breeze blowing, so I had to wait for it to pause or die down before shooting. I used the best pellet from that test, hoping that the gas spring wouldn’t make a difference, but I was wrong. The most accurate pellet with the factory rifle was the Gamo Match, which grouped as tight as 0.325″. Well, the gas spring shot the same pellet into about one inch. So, I switched to the new Air Arms Diabolo Field domes, which we know are really JSBs. The description says they weigh 8.44 grains, but mine averaged 8.3. However, they grouped only a little better than the Gamo Match, so I switched to Gamo Master Points. They were all over the place, with three shots going into 2″, so I stopped without finishing that group. Time for reflection.

What was different?
This was a different rifle from the standard Whisper I tested (I mean this was not the first test rifle converted to a gas spring, but an entirely different rifle altogether), plus this one had a gas spring instead of a coiled steel spring. I had cleaned the bore with JB Non-Embedding Bore Cleaning Compound and the bore felt smooth, which is not scientific, I know, but it felt just as smooth and good as the first rifle. Since I had no idea how this new rifle compared in accuracy to the first rifle, I concentrated on the pellets instead. I mentioned in the Webley Patriot report that a gas spring can blow the pellet skirts into the barrel walls, so maybe that was happening here. The correction is easy enough to apply – just start shooting pellets with heavy skirts or pellets made from hardened lead. I chose Beeman Kodiaks.

Close, but no cigar
Kodiaks tightened up the groups right away, but not to the extent I had hoped. Instead of an inch, they tightened to three-quarters of an inch, which is going in the right direction but not far enough. I was running out of Kodiaks, so I opened a fresh tin of H&N Baracuda Match – those Kodiaks by another name that Pyramyd has had on sale for over a year. I laid in a supply because the price was so low, and I alerted all of you, as well. I hope you acted on it.

I now started fooling around with the placement of my off hand. Resting it out by the forearm tip gave me three-inch groups, so that was out. The flat of my palm in front of the triggerguard gave me three-quarters of an inch, but no better. Then I remembered the backs of the fingers! Success!

The forearm has a raised area in front of the triggerguard that helps you locate your off hand. I balanced it on the backs of my fingers for best results.

Finally
The first group measured 0.614″ and was strung vertically – an indication that the hold is not quite right. I found a slightly different way to rest the rifle on the back of my hand and voila – a group measuring 0.469″. After that, I shot group after group under a half-inch. Best group of the day measured 0.441″ Not bad for outdoors with gusty winds at 25 yards. The sweet resting spot on a Whisper has a ridge in the center of it, so you can feel when you’re in the right spot. 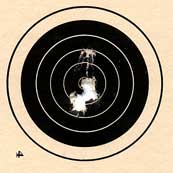 A nice target with some vertical stringing. Measures 0.614″. Still need to adjust the hold a bit. Shot at 25 yards with 5 Baracuda Match pellets. 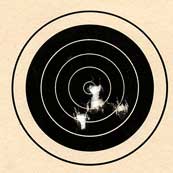 Nothing says I’ve found the absolute best pellet for this rifle. All I do know is that it’ll probably be a heavy pellet or one made from hard lead. Maybe 10.5-grain Crosman Premiers will be best. But what I do know is that this rifle is a sheer joy to cock and shoot. The cocking is so smooth that I don’t have the words to describe it. And, the firing is light, quick and as smooth as any tuned spring gun you’ve ever shot.

Hunters rejoice!
The fact that the Whisper likes heavy pellets should be comforting news to airgun hunters who want to use .177s. 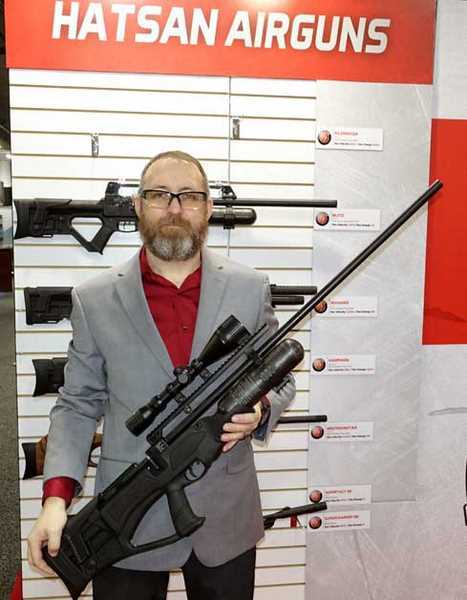