I don’t know the design team at Gamo, but it’s obvious they have one and they listen to what shooters say about their guns. The evidence is in my hands – a new CF-X in .22 caliber that I’m going to test for you. This one also has the new Air Venturi Ram Air gas spring.

Since I already reported on the GRT trigger modification, I won’t describe it here, except to say that I installed one on this CF-X. The regular CF-X trigger has a long second-stage pull with some creep. The GRT III eliminates all of it.

What’s different?
I last looked at the CF-X back in February 21, 2006. I did so at the encouragement of a reader named Hernan who I branded CF-X Guy. He was hot to see the rifle, and although I was definitely NOT impressed with Gamo in those days, I gave in. Well, that test changed my mind. I saw real value in that rifle with only one negative observation about the trigger and one about the loading ramp.

The GRT III removes the trigger objection and Gamo has dealt with the loading ramp situation, which is the reason for my opening remark. The CF-X is an underlever. To load the rifle, a rotating breech is turned to the right, exposing a curved loading ramp. The original CF-X had a smooth polished ramp that caught the head of the pellet and caused it to flip over. You could end up loading the pellet breech-first if you weren’t careful. The new ramp has been bead-blasted and finished with matte nickel plating. The surface is rougher, but ironically has less drag and isn’t so prone to flip pellets. That’s the sign of a real airgun designer at work! 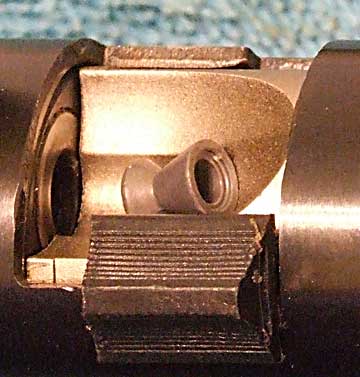 The new finish on the rotating breech trough makes loading much easier.

On the other hand…
Gamo screwed up when someone chose ALUMINUM as a top scope rail! PLEASE stop telling me scopes don’t move if the clamping pressure is high enough. They all DO! NO AMOUNT of clamping pressure alone will stop a scope mount from moving under recoil. Look at what a few hundred shots has done to the scope stop hole in the Gamo rail! This is the rail on the Whisper with the Air Venturi Ram Air gas spring, but the results will be identical for the steel mainspring. I know because, if you recall, I have two Whispers, one with steel and one with gas. I just checked and the scope stop hole on the steel spring gun is peened back the same way as on the gas spring gun. 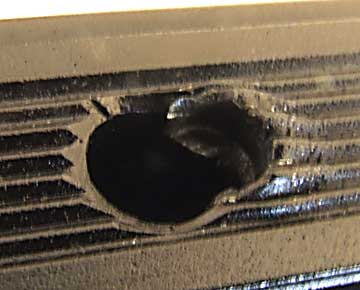 After a few hundred shots, this is what the recoil stop pin on the Gamo-supplied scope did to the Whisper’s scope base. Come on, Gamo, you can do better!

Gamo, Gamo, Gamo! Come on, guys, fix this weakness immediately! You have a wonderful group of air rifles in many respects. We don’t need this. Replace this part with one made of steel and everything will be fine again.

What’s it like?
A gas spring in a CF-X has got to be one of the best ideas to come along in some time. I loved the Whisper. I also love this gun! The underlever seems to be made for cocking gas springs, because it seems as easy as cocking a steel spring. The resistance is still all the way through the arc of the lever, but the leverage is terrific! And, now that the loading problem is solved, what’s not to like?

Shooting
The jolt upon firing seems slightly harsher than the Whisper with the gas spring, but it’s not objectionable and certainly a lot less than with the steel spring. I still have the gas spring Whisper to compare to. If I didn’t, I wouldn’t be able to tell. Of course, this is a .22 caliber rifle, which may change things a bit. But, don’t forget, you can leave this rifle cocked for hours without degrading the spring, and there’s absolutely no twisting or torque effect when it fires.

Disassembly
Once again, Gamo uses Torx fasteners to hold the action in the stock. While I was swapping triggers, Nate asked how to remove the stock, so for the benefit of new owners who haven’t guessed it yet, you pop off the side panels with a screwdriver to find the Torx forearm bolts. With Gamo guns, it’s the rear triggerguard screw instead of the front that holds the action. 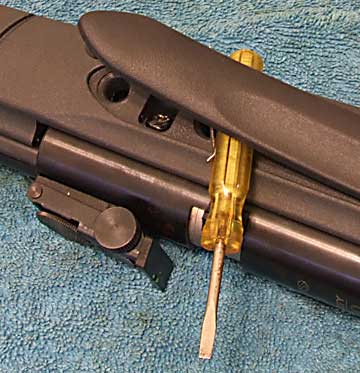 Pop up the forearm pads with a screwdriver. Four rubber pins hold each side to the stock.

I can’t wait to fire this rifle through the chronograph for you! It feels like a real tiger!